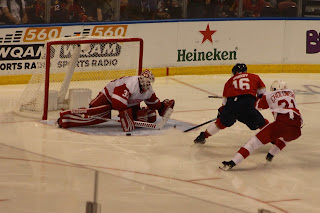 Whenever the Detroit Red Wings travel to Sunrise, FL., there are a lot of people that I look forward to seeing.

If you can find me three nicer beat writers to work with, speaking of Helene St. James, Dana Wakiji and Ted Kulfan, then do it.

When the Red Wings came to face the Florida Panthers on October 20, I once again spent time with Woods.

During the first intermission, Paul and I took a different approach to this conversation in what turned out to be a 4-3 Red Wings victory, the teams' first of the season.

We decided to focus on the most interesting topics in the NHL.

An 82-game regular season in the NHL is brutal.

The grind becomes even tougher in the playoffs in what turns out to be a war of attrition when chasing the most difficult championship, and that's winning the Stanley Cup Trophy.

Here are some of Woods insights of the key storylines that will unfold this season.

Q: How important is it for the NHL to have all the Original Six Teams qualify for the Stanley Cup Playoffs?

A: I think it's important Scott. It's a good point especially with the history of it. The Red Wings have a rich history with Gordie Howe, Ted Lindsay, Alex Delvecchio, Nicklas Lidstrom, Steve Yzerman, Sergei Federov and the list goes on and on. It's neat to be a part of that.

I know when Detroit made it to the playoffs 25 consecutive years, and missed the last two, we don't like that feeling. We want to get back there as fast as we can.

Q: The Vegas Golden Knights made it all the way to the Stanley Cup Finals in their inaugural season. Do you see any let down in their second campaign?

A: It was amazing. I didn't pick them to go that way. I kept looking at them and said, yeah a good start and this is a team that's running on adrenaline right now then the wheels will fall off sooner or later. But they never did. 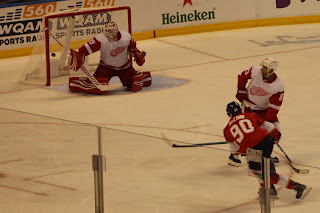 They had former Panthers Coach Gerard Gallant, one of my former teammates, and I can't say enough good things about him. The way they played with intensity up and down the line-up was impressive. It was like "Us against the World" and lets just show them what we can do. It's an amazing story.

They've gotten off to a slow start (8-11-1) but that's going to change. They have some key players who are injured right now. I think they'll be a playoff team again in the Western Conference. General Manager George McPhee has done a fantastic job.

A: We do differ on this one Scott and there is nothing wrong about that. I respect how long you've covered the sport. I really do expect Vegas to be in the playoff picture in the Western Conference and they'll do well when they get there.

Q: Finally, by the time we see each other again in the spring, Seattle could be the 32nd franchise in the NHL and this will balance the conferences out with an equal amount of teams. What are your thoughts about that?

A: This will be great. After what Vegas did, they'll expect the same thing in terms of higher expectations with better players available. I don't think they'll duplicate what was done last season. The general manager and coach they hire will be under a lot of pressure based on what Vegas accomplished last season.

Scott Morganroth can be reached at www.scottsports33.com, is a member of Detroit Sports Media. He also hosts the Sports Exchange on Tuesdays and Thursdays from 5-7 pm on the weinetwork.com.
- November 17, 2018