When you look at powerful High School Football Programs in Michigan, the three that come to mind are Birmingham Brother Rice, Detroit De La Salle and Farmington Hills Harrison.

I just heard that Harrison's 49-year run, all under legendary Coach John Herrington, has come to an end as the school won't be in existence next year.

In South Florida, one of the biggest High School Football Programs is the Deerfield Beach Bucks in my backyard. 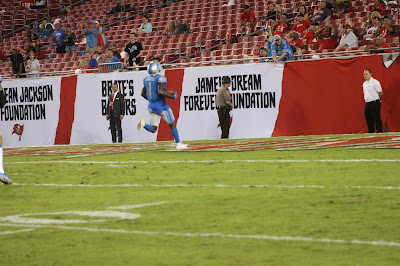 Robinson went on to play three years as a running back for the Jacksonville Jaguars from 2013-2016.

Another prominent Buck which made Deerfield Beach High School proud is Jason Pierre-Paul.

Paul has won a Super Bowl and also has two Pro-Bowls on his resume. To date, he has 68 sacks.

The latest Deerfield Beach Buck in the NFL plays his home games at Ford Field.  His name is Brandon Powell, 23, who was signed as an undrafted free agent from the Florida Gators.

Scouting and player personnel staffs are not only graded on the players they draft, but whom they sign as undrafted free agents.

Do the Lions have a hidden gem on their roster?

Time will tell how many teams will regret that they should have snapped up Powell, who has a chip on his shoulder looking to prove his doubters wrong.

When the Detroit Lions came to Miami to face the Dolphins on October 21, I had an opportunity to spend time with Powell, who is 5'8" and 181 lbs.

Another former Lion wide receiver who had the same initials B.P.is Brett Perriman.

Perriman played his college ball in the state of Florida with the Miami Hurricanes.

When I asked Powell if he had ever heard of Perriman, he politely nodded his head and said no.

He came across to me as a level headed and blue collar young man.

Here is what he had to say after the Detroit Lions defeated the Miami Dolphins 32-21 at Joe Robbie Stadium.

Q:Tell me about your road to the NFL?

A: It was a long, long road and I still have a long ways to go. I'm still learning a lot from a great group of guys in the receivers room. I'm just happy to be here and living a dream since I was a kid.

Q: Being an undrafted free agent like you were, your road wasn't the easiest and conventional to get to the NFL. How much more of an effort did you put into it to make this happen?

A: I did but I always work hard and I knew I'd get a shot somewhere. Once I got here, I just had to make sure that I took full advantage of my opportunity, and every opportunity I had. I have a great group of guys who were willing to teach me everything from day one since I got here.

It's great with this group of receivers that show me the way and I just continue to work and made the team.

Q: When you played in the Tampa August pre-season game under adverse weather conditions, can you recollect about what was a critical contest to make your last push to make the squad? Obviously, your big highlight was an 80-yard punt return for a touchdown.

A: I take everyday as an interview and try to do my best every single time. It was good to be back in Florida at home to have a game like that to score a TD in front of my family. It was a good opportunity for me.  I was thankful for the opportunity the Detroit Lions gave me to play in my hometown to play in my first NFL game.

Q: Tell me what it was like to play in Deerfield Beach High School? I know they're a powerhouse in Broward County.

Q: How much did it cost you to get tickets for your family and friends to attend the Lions vs Dolphins?

A: My family are Dolphins fans and they were out tailgating. They didn't care about watching the game. They just wanted to be out here at my first NFL game in South Florida. I wish I could have played and they had to spend a lot of money to get them all in here. They were just happy to be here and tailgate. My grandma and everyone else was watching the game. It was fun.

Q: There have been no shortage of Florida Gators that have worn the Detroit Lions colors. Lomas Brown is a Lions legend and currently a Lions color analyst. Jarrad Davis and Teez Tabor are also teammates of yours. Going back in the record books, there are a lot more former Gainesville residents that played in Metro Detroit. What is it like to be the latest Gator wearing a different color blue in the State of Michigan?

A: It's great and that shows you the Gators produce a lot of athletes. They put a lot of talent in the NFL. The Florida Gators are one of the top schools in the country and produce athletes.

Q: Tell me your thoughts about playing for the Detroit Lions, who own a deep history in the NFL?

A: It's great. I never thought of it because I was a Dolphins fan growing up. I never heard much about the Detroit Lions during the draft process coming up. Of course everybody knew who Barry Sanders was. I used to watch him in college because I went to college as a running back. I used to watch a lot of his video on You Tube. Just being here playing for the Detroit Lions and being here on this team is an honor. 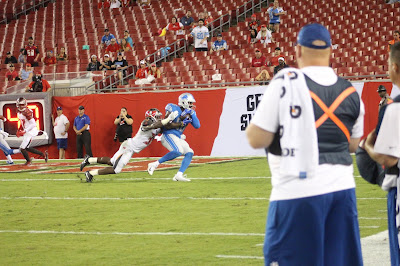 Q: Tell me about the wide receivers who you like to pattern yourself around?

Q: What are your thoughts about catching passes from Matthew Stafford?

A: My first ever pass catch from him, he ripped my gloves. It's great to catch a pass from a QB like that. He's one of the great QB's in the NFL. It's an honor for me to be on the same field with him.

Q: Does being an Underdog inspire you considering what it took for you to get to the NFL?

A: To me, I've always been an Underdog.

I've never had the size that everybody wanted. My work ethic is what makes me, me.

Q: Finally, Is there any other thing that you want to add to the conversation?

A: I just want to work hard, learn from these guys and when the time comes just take advantage of it.

For whatever it's worth, it was interesting when Powell mentions Barry Sanders. Brandon went to school as a running back. Like Powell, Sanders is 5-8 and he weighed 200 pounds.

Meanwhile, Darren Sproles, 5-6, 185 pounds has been used on special teams in the kickoff and punt roles. Sproles has hybrid skills being used as a running back and a slot receiver. The true definition of being a hybrid player.

It will be interesting to see if the Lions coaching staff identifies whether Powell can be used in many ways in an effort to find a new playmaker.

Brandon is indeed an Underdog and playing in the Sunshine State along with the many players who have had NFL careers because they can play year round is why there is an abundance of talent down here.

I'll be curious to monitor the developments if Brandon Powell is another Hidden Gem.

Scott Morganroth can be reached at www.scottsports33.com. He is a member of Detroit Sports Media and is Host of the Sports Exchange on weinetwork.com which can be heard on Tuesdays and Thursdays from 5-7 pm.
- November 18, 2018