As Atlanta, GA. goes back to normal and their tourists depart from The Super Bowl, I want to take the time to write a brief story on what turned out to be the lowest scoring game in the history of this mega contest.

Here are some key things that stood out during the past week.

* During the Super Bowl Icons Story, I want to make a correction on Jerry Green's age. The majority of the facts on the internet are accurate.

I found out from my colleagues back in Detroit, Green's age is 90, not 89.

Nevertheless, it's still impressive that he's covered all 53 games and I hope he covers many more.

It's my responsibility to get these facts correct otherwise own it and that's what I'm doing.

I'm glad that I had the opportunity to recognize a legendary colleague and a truly great friend!

With all of the history Jerry has witnessed over the years, now he can say he's watched the lowest game in Super Bowl history as the New England Patriots topped the Los Angeles Rams 13-3.

QB Tom Brady and Coach Bill Belichick guided the Patriots to their sixth title in franchise history. Congratulations to the New England Patriots and kudos to Jerry Green.

* Wide receiver Josh Gordon now has a championship ring and there are reports that he could be reinstated during the off-season. I believe that with all the suspensions he's received under the NFL's Personal Conduct Policy he should be permanently banned from the league.

But, Josh is with the right team and if any organization can rehabilitate him, it's New England. He's a talented player in his prime and there is no better QB that he can flourish with than Brady. I do have a heart for the kid, so it's hard to not root for him. 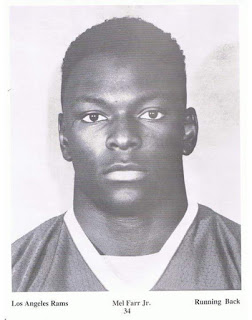 * On Tuesday's Edition of the Sports Exchange, I tried so hard to get Mel Farr Jr. to go out on the limb to give us a score. He didn't and said he was rooting for Brady because it's hard to root against greatness.

Mel did give us an over/under and it was 45.

I thought about him during the game as he must have known something that all of us didn't.

Kudos to you Mel, who is in the photo.

* In the past few years, I've worked diligently to stay away from watching the hype for all the Super Bowl coverage because I don't care for too much conversation for just "A Football Game."

Before I got sick with diabetes, I used to fast on Yum Kippur because it was something I was committed to and it was the right thing to do.

During the week, I attended to my business with the Sports Exchange, networking to find sponsors for the program and trying to recruit writers for the South Florida Tribune, in addition to writing content.

The weekend saw me watch the Detroit Red Wings defeat the Ottawa Senators 2-0 along with watching crime shows with my wife Candy. I even watched reruns of Gilligan's Island.

* This is probably been mentioned often but the New England Area gets the best of Los Angeles for the second time within six months.

The Boston Red Sox defeated the Los Angeles Dodgers in the World Series and now the Patriots topped the Rams last night. In light of history, it's time for another Boston/New England Tea Party.

So what's ahead in sports?

There will be no drop off with football as the Alliance of American Football kicks off this week. There are a lot of big NFL names that are backing this league.

Games will be televised on the NFL Network and CBS Sports Networks. The league will play games into April and is basically a developmental league for the NFL. I'll talk more about this in the coming months.

I'm looking forward to covering another Red Wings Game in Sunrise, FL, The NHRA Gatornationals in March as well as Spring Training here in the Grapefruit League.

He's the Founder of The South Florida Tribune and co-hosts the Sports Exchange on weinetwork.com with Peter Wein on Tuesday's and Thursdays from 5-7 pm ET.
- February 04, 2019