During the past two weeks, the Michigan Wolverines and FAU Owls have been linked to some interesting storylines.

This week, if you play the name game, there are some similarities as well.

Early in the day, No.7 Michigan escaped with a 24-21 double OT win at The Big House against The Black Knights.

This was the second straight year that the Black Knights pushed an opponent into overtime. 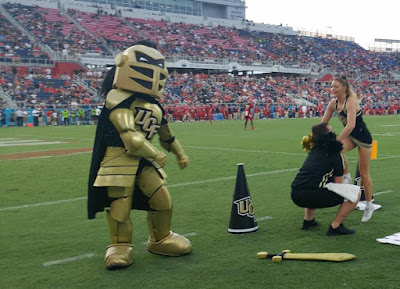 Michigan evened it's all-time series record with Army to 5-5.

This is the third meeting between universities that are only 2.5 hours apart off the Florida Turnpike.

The first meeting occurred in the Owls third game of the program's third campaign on September 13, 2002.

The game was played in the Citrus Bowl and finished with the Knights winning 33-29 after knocking down a potential TD pass in the end zone in the closing seconds.

The second meeting played at UCF's on-campus Spectrum Stadium wasn't even close with the Owls getting crushed 56-36.

How would today's first meeting at FAU Stadium turnout?

For the second straight week, FAU fell behind early as No.18 UCF jumped out to a 28-6 lead in the first half which took nearly two hours to complete.

Unfortunately, for the Owls things got worse as UCF scored at the 7:37 mark as Knights QB Dillon Gabriel connected with Adrian Killins Jr. for a 74-yard TD pass.

It didn't take long for UCF to add to it's lead as the Knights scored again at the 3:19 mark. This drive was six plays, 71 yards and 2:13 to complete. Gabriel scored on a four-yard run. The point after failed and the Owls trailed 41-6.

By the end of the third quarter, the majority of the fans in the stands were the Knights fans, who traveled to watch what would turn out to be a scrimmage.

A good way to spend the weekend for the fans that make Orlando home.

A football game then a day at the beach on Sunday, just a mere 1.8 miles away east of the stadium.

For the few fans left at the 4:20 mark in the fourth quarter, the game was delayed due to lightning as UCF held a 48-14 lead. The normal procedure is to wait at least 30 minutes before the game is called from the last strike.

Among those in attendance in the Press Box were scouts from the Baltimore Ravens, who are in town to face the Miami Dolphins tomorrow afternoon at Joe Robbie Stadium.

You didn't need a lot of statistics to explain how ugly this was for FAU.

FAU QB Chris Robison had a day that he'd like to forget by completing 18-40, one interception, zero TD's and was sacked four times.

crowd didn't do anything to sell tickets.

"I want to apologize to the fans," Kiffin said. "We played bad early. Not many positives came from this game. I was shocked at how it went especially our inability to move the ball against them in the first half. I've been concerned about the offensive line from the first day of camp.

"Our defense had three unsportsmanlike conduct penalties and we can't do that. We got beat up today and lost two guys at running back.

"I'm surprised by the outcome and I thought we would have showed up today."

Robison made no excuses about his performance.

"They (UCF) had a good plan going in blitzing us a lot," Robison said. "It was tough for us to get started and that was the difference in the game. Last week we started slow and today we continued to not execute on offense and it showed. We prepare the same way regardless of the opponent. You can't fall behind against any opponent, especially against a good one."

FAU will have to wait another week to get the program's 93rd win as the Owls return for a road game in the Midwest.

This time they'll go to Muncie, Indiana., to face Ball State University for a 2 pm start.

Scott Morganroth can be reached at www.scottsports33.com and is Founder and CEO of The South Florida Tribune.
- September 07, 2019