I saw Joe Montana play his last game at Candlestick Park in San Francisco, CA., against the Detroit Lions on Monday Night Football and he won 24-3.

I saw John Elway defeat the Atlanta Falcons 34-19 in Super Bowl XXXIII at Joe Robbie Stadium in 1999 as the signal caller went out on top in Miami.

Tonight, it appears that I've seen another player play in his last game, but this one is forcing his way out of town and he got a lot of attention on Thursday Night Football. 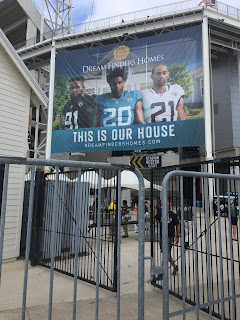 There were no shortage of storylines by NFL Network Commentators Joe Buck and Troy Aikman.

After tonight's game it looks like another player down the road will be wearing the No.20 jersey that Jalen Ramsey occupies.

I would highly doubt it that Ramsey will ever make Jacksonville's Ring of Honor and will never have his number retired.

When I grew up as a kid, Marcel Dionne wanted out of Detroit and he moved to Los Angeles to play for the Kings. When Dionne returned to Detroit to play at Olympia Stadium, he was pelted with debris. The Red Wings would eventually put a protective tunnel to protect him.

Despite winning Stanley Cups for the Red Wings, Sergei Federov burned his bridges and despite getting inducted into The Hockey Hall Of Fame, the No.91 is still not retired.

Time hasn't healed this wound but with Steve Yzerman in charge of Hockey Operations, we'll see if Federov's number goes to the rafters.

But back to Ramsey.

Last year, he made derogatory comments towards opposing quarterbacks and had a bullseye on his chest. The Jaguars had a disappointing season finishing 5-11 and failed to make the playoffs.

This was a team that came minutes away from reaching the Super Bowl losing to the New England Patriots. 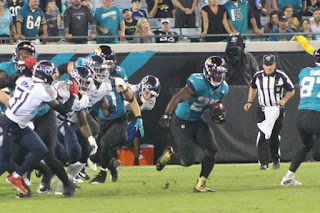 Ramsey came into training camp driving a money truck. Time will tell if he gets his cash.

On Sunday, he committed a cardinal sin by getting into a heated argument on the sideline with Head Coach Doug Marrone that led to more controversy resulting in a trade demand.

If this wasn't a Thursday Night Game, I think Ramsey would be wearing another uniform.

If indeed this is Ramsey's last game with Jacksonville, he had five tackles, four assists for a combined total of nine to go along with a forced fumble.

The Jaguars defeated the Tennessee Titans 20-7 on a rainy night.

QB Gardner Minshew II  recorded his first NFL win and was quite efficient by going 20-30 for 204 yards and two touchdowns.

One of those touchdowns was to DJ Chark for 22 yards. He has a TD pass in each of Jacksonville's first three games.

When this game, which took 3:01 to complete was over, Coach Doug Ma 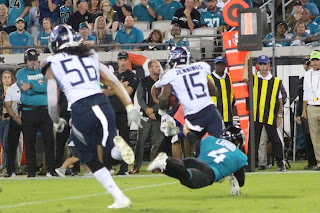 rrone was happy that his squad got a much needed win especially after a tough 13-12 loss Sunday to the Houston Texans in Texas.

"This was a good win, the longest short week in the NFL," Marrone said. "We did a heck of a job in the protection game. Our QB is playing remarkable and the team played with a chip on their shoulder. We do have to do a better job protecting the QB and the offensive line will continue to get better. We also have to do a better job running the ball.

"DJ Chark is playing at a high level and this will open up a lot of things for us."

Chark finished the game with four receptions for 76 yards and a touchdown.

Minshew II said he was extremely excited that he got his first win on National TV but had higher praises for his new favorite target, Chark Jr.

"DJ has been awesome and he's been playing with a lot of confidence," Minshew II said. "I have confidence in him. If I see him one-on-one, I'll throw it to him." 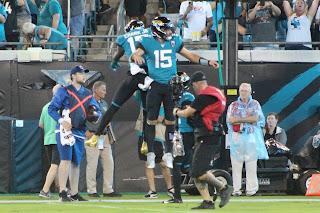 With tonight's win on Thursday, the Jaguars improved to 3-0 versus the Titans at TIAA Bank Field. Jacksonville has now won four of it's last six games on Thursday Night and four straight at home.

The Jaguars improved their record to 63-46 in games which they wore teal jerseys.

The nicest part of winning on Thursday Night is the team can decompress and get ready for it's next opponent. It won't hear about the negativity around the building.

Whether Ramsey is on the field on September 29 when the Jaguars (1-2) face the Denver Broncos in Colorado remains to be seen.

But you can rest assure that this drama doesn't figure to continue much longer and Jacksonville will get a lofty return to part ways with their defensive playmaker, who was the fifth overall pick in the 2016 NFL Draft out of Florida State just 2.5 hours down the road in Tallahassee off I-10 West.

If this is his last game with the franchise it will at least end with a win.

But it won't compare to the high roads of Montana and Elway.

Scott Morganroth can be reached at www.scottsports33.com.
- September 19, 2019