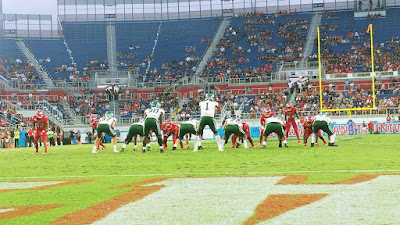 When Candy and I left our house for FAU Stadium to cover the Wagner Seahawks vs FAU Owls, we were definitely not worried about a traffic jam.

The Seahawks (0-3), who are based in Staten Island, NY, are an FCS School (one division beneath FBS) with an enrollment of 2000. The school was founded in 1883 and has played football since 1927.

They were Division III National Champions in 1987 and became an FCS program in 1992.

I was intrigued by the fact that the school has 13 Floridians on its roster. Six were from Palm Beach, Broward and Dade Counties.

Thus, it was no surprise FAU entered the Wagner game as 39.5 point favorites.

Would the point spread be justified?

FAU won the coin toss and drove the length of the field and scored at 12:01 mark in the first quarter. The drive was nine plays for 53 yards with 2:59 elapsed.

FAU took a 7-0 lead as QB Chris Robison threw a five-yard TD pass to John Raine and Vladimir Rivas made the PAT.

It didn't take long for the Owls to match their point total in 2012 against Wagner.

With 42 seconds left in the first quarter, Robison connected with Deangelo Antoine for a 37-yard touchdown and Rivas made the PAT to give FAU a 14-0 lead.

Robison went 9-13-119 yards and two touchdowns in the first quarter.

This combination connected again for 17-yards with 11:40 remaining in the second quarter to give FAU a 21-0 lead.

The Owls took a 28-7 lead at halftime. Robison and Antoine had three touchdowns to this point.

From this point on, as expected, the game turned into a scrimmage for FAU which has been on the wrong end of these outcomes plenty of times.

The dynamic duo of Robison and Antoine connected for their fourth score, this one was for 57-yards as FAU increased its lead 35-7 with 50 seconds left in the third quarter.

The back-up QB #6 Nick Tronti got into the act by scoring at 11:33 of the fourth quarter with a three- yard run. FAU's lead increased to 42-7 as it got closer to eclipsing the point spread.

Wagner was driving late in the game, but FAU's defense held at the 4:11 mark giving the offense one more opportunity to score. FAU took a timeout on third down and two with 2:54 left in the fourth quarter to call a play for Tronti. 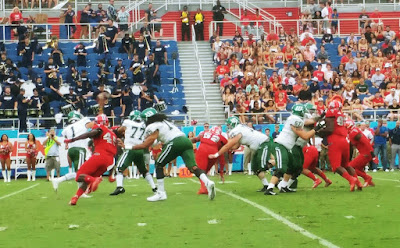 FAU would not convert on this set of downs, the game ended 42-7 and the Owls improved to 2-2.

When the contest was over, here were some interesting statistics.

FAU had more penalties as it committed 12-95 while their visitors from New York had eight for 67 yards.

Robison had a record night going 25-36 for five touchdowns. Antoine had a monster night with 11 catches for 173 yards and four touchdowns.

Coach Lane Kiffin was pleased with his squad's performance.

"Chris has been very accurate and didn't force too many balls. We've done a good job the past two weeks scoring in the red-zone. Our goal today was to have a shutout with no turnovers and we did that today."

FAU's next game is against the University of North Carolina Charlotte on the road on Saturday, September 28 at Jerry Richardson Stadium.

The Owls have a bye week after that before returning to FAU Stadium on Saturday, October 12, 2019 for a 4 pm contest versus Middle Tennessee State.

Scott Morganroth can be reached at www.scottsports33.com.
- September 21, 2019