Breaking In My Prize Pupil

There was a different feel to this football game than I normally experience.

Tonight, I won't have to write a normal game story filled with statistics and quotes.

This time, I'm writing a sidebar. 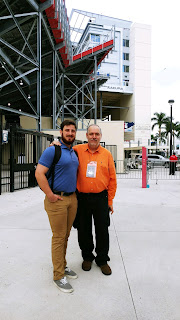 As I continue to build the South Florida Tribune both on the business, editorial and broadcasting sides, I've turned over the reigns to my young Sports Writer Louis Addeo-Weiss.

When I hired Addeo-Weiss a few months ago, he's written primarily baseball and music stories.

As the company has grown, so has he.

My prize pupil knows that he must get familiar with all sports to be well rounded.

As the Sports Exchange transitions to a new home on the South Florida Tribune Broadcasting Network, through his consistent production, Addeo-Weiss has now joined Myself as a Co-Host.

He knows that to continue to be on the air, he must continue to write regularly and at a high level. 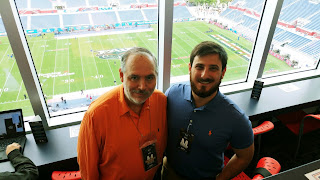 I told Addeo-Weiss that when I made the decision to mentor and develop  him, that I expected him to eventually hire and build his own staff.

This is the only way we can grow the company and secure his role and future.

If there is ever a time to break in a new writer at a live event, this was it. 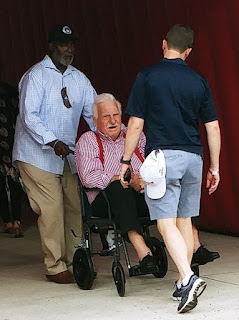 The first FAU Game I ever covered was on September 1, 2007 when the Owls faced Middle Tennessee State at Lockhart Stadium.

Schnellenberger was in attendance for this game.

Smith was 12-26-195 yards with two touchdowns and zero interceptions in the triumph.

Blue Raiders Head Coach Rick Stockstill also coached in 2007 and he remains at the helm for the university located in Murfreesboro, TN.

Going into this game, Stockstill has an 89-81 record.

At home, the Blue Raiders lead the series 7-2 and on the road, lead 5-2 in South Florida.

Twelve years later, Addeo-Weiss was making his debut and once again, the Owls are facing FAU but in an on campus stadium which is facing the Atlantic Ocean.

This is the only venue in the country that faces this body of water just 1.8 miles east. 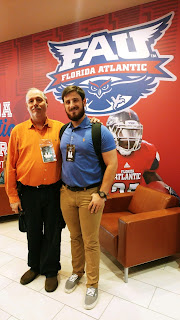 There was no view at the now demolished Lockhart Stadium, but there is a gorgeous one on the sixth floor of the Press Box.

Lane Kiffin is running the show for FAU and sophomore QB Chris Robison is under center.

How would things turn out in Addeo-Weiss debut covering his alma-mater?

Like Myself, Addeo-Weiss' first game was a victory as mine against the Blue Raiders.

Ironically, the same amount of total points were scored in both contests with 41.

Both FAU wins were in double figures.

Robison was 15-30 for 145 yards, one touchdown pass and zero interceptions. His passing yards were close to Smiths' in 2007. Robison added 11 yards rushing.

Next up for Addeo-Weiss, he's going to cover two more football games for us in November. He'll get a taste of basketball during the winter and spring.

Then I'll turn him loose and he can cover his specialty baseball on a regular basis while we continue to develop the business and broadcasting parts of the South Florida Tribune.