The Weekend In Review

During the weekend, our football teams were 2-1. 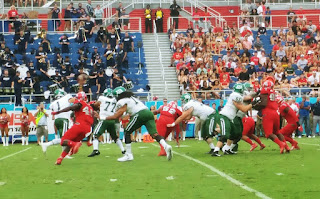 The Florida Atlantic Owls improved their record to 3-2 with a 45-27 road win against the University of North Carolina-Charlotte.

FAU Coach Glenn Spencer coached at UNCC a year ago and when the game was over got a cold shower.

FAU QB Chris Robison picked up where he left off against Wagner the previous week.

In this Nationally televised game on The NFL Network, he was 20-27 with 312 yards and two touchdowns.

Florida Atlantic showed some balance on offense by amassing four rushing touchdowns, two of which came from running back Malcolm Davidson, who had 13 carries for 83 yards.

Two touchdowns occurred in the air.

The Owls have a bye this weekend.

They return to action on Saturday, October 12, 2019 at 4 PM as they face Middle Tennessee State at FAU Stadium.

The struggles continued for the Miami Dolphins against the Los Angeles Chargers.

The last time the Chargers won a game in South Florida was an overtime playoff thriller on January 2, 1982, in The Orange Bowl in what was regarded as one of the greatest games in NFL History. 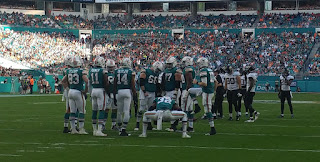 Chargers running back Melvin Gordon was active after reporting this week ending his holdout, but he didn't have a carry.

Dolphins QB Josh Rosen threw for 180 yards and a touchdown, but had an interception and was sacked four times.

Up next for Miami, they have a bye this weekend, then play host to the Washington Redskins on October 13.

The Redskins are 0-4 and are 0-5 at Miami, with the most recent game in 2011. There are rumors that Coach Jay Gruden is on the hot seat.

This game could be the best opportunity for the Dolphins to avoid the 0-16 club which has two members, the Detroit Lions and Cleveland Browns.

Finally, the Jacksonville Jaguars earned a thrilling 26-24 win over the Denver Broncos in Colorado to improve to 2-2. 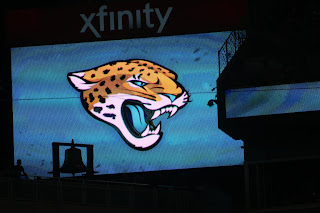 The Jaguars won despite Jalen Ramsey being inactive for the first time in his career and ending his streak of 131 straight games missing the first game in his four-year career. He missed practice all week, first with an illness, then a back injury and finally for paternity leave.

Despite the drama, Minshew Mania went to the Rocky Mountains and the rookie didn't disappoint his followers.

Despite being sacked five times, Minshew II was 19-33 for 213 yards and two touchdowns. He didn't throw an interception.

Fournette's career day topped his previous high of 181 yards on October 8, 2017 at Pittsburgh.

Kicker Josh Lambo booted all four of his field goals including the game winning 33-yarder as time expired to send the Jaguars home happy.

The Broncos visit the Los Angeles Chargers on Sunday.