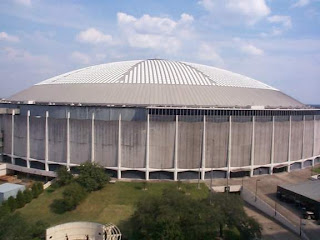 The Tennessee Titans travel to Houston to take on the Texans at Reliant Stadium. The Titans used to be the Oilers, who played in the Astrodome across the parking lot.

My only visit to the Astrodome was when the Detroit Lions faced the Oilers and Hall of Fame Running Back Barry Sanders eclipsed the 10,000 yard rushing mark. The intriguing part of this game is the Texans debated about taking University of Texas standout QB Vince Young, but passed on him and he was drafted by the Titans.

The New Cleveland Browns visit the defending Super Bowl Champions Baltimore Ravens in Maryland. Once upon a time the Ravens were the Cleveland Browns. But when former late Owner Art Modell saw all of Cleveland's Sports Teams get new stadiums and his was left out, in addition to the fact that the Rock And Roll Hall of Fame was built, he bolted Lake Erie for the Baltimore Inner Harbor. The Ravens have won two Super Bowls since departing Ohio and the Browns have a new stadium, but have struggled to field consistently contending teams.

When the Dallas Cowboys face the Kansas City Chiefs on Sunday, how many people remember that these two franchises once played in the same city?

From 1960-1962, Chiefs late Owner Lamar Hunt had an American Football League team in Dallas that played at the historic Cotton Bowl. They were called the Dallas Texans. They had a Hall of Fame QB named Len Dawson and legendary Coach Hank Stram that were with the Texans and won an AFL Championship in 1962.

Stram and Dawson played a huge part in the Kansas City Chiefs lone Super Bowl Title. In 1969, the Chiefs pounded the Minnesota Vikings 23-7,  in Super Bowl IV. The announcers in this game were the late Jack Buck, late Pat Summerall  and Frank Gifford. The cost of a 30-second commercial was $78,000 and the audience had an estimated viewership of 44.3 million viewers on CBS. The Vikings entered the game as 12 point favorites. The contest was played in front of 80,562 fans at the now demolished Tulane Stadium, in New Orleans, LA.

The Miami Dolphins go to Indiana and face the Indianapolis Colts. Former Dolphins Coach Don Shula lost his first Super Bowl appearance as a head coach for the Baltimore Colts. In Super Bowl III, the New York Jets defeated the Colts 16-7 on January 12, 1969. This is the game that Jets Hall of Fame QB "Broadway" Joe Namath delivered on his Guarantee to deliver a championship to the Big Apple. Shula would eventually win a pair of Super Bowls with the Dolphins and piloted the only perfect season at 17-0 in NFL History.

Finally, the Green Bay Packers and Washington Redskins have never played in the Super Bowl, but have a common link to the game when they play in Wisconsin on Sunday.

Hall of Fame Coach Vince Lombardi has the Super Bowl Trophy named after him and has coached both historic franchises. He won Super Bowls I and II defeating the Kansas City Chiefs and Oakland Raiders in consecutive years.

From 1959-1967, Lombardi guided the Packers to an 89-29-4 mark. He coached one season with the Redskins and led Washington to a 7-5-2 mark. Prior to Lombardi's arrival, the Redskins had 14-straight losing seasons.

When you watch the game at Lambeau Field, while Aaron Rodgers and Robert Griffin III are the present and future stars, Lombardi's connection with both franchises is indeed something to remember.