I've seen a lot of great football games featuring the Miami Dolphins and Miami Hurricanes, but in all of my years of covering baseball, this is the first no-hitter I've ever seen in person.

Of all places, it happened on the site of the Historic Orange Bowl Location. 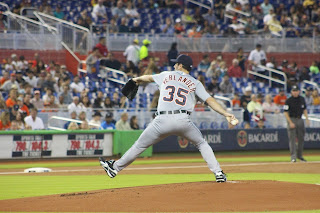 This was a tune-up for the Tigers as Detroit prepared for the playoffs.

The fans got more than they bargained for as the story in this game was Marlins right-handed pitcher Alvarez Henderson. He threw a 1-0 no-hitter against the Tigers and it was the fifth in Marlins history. 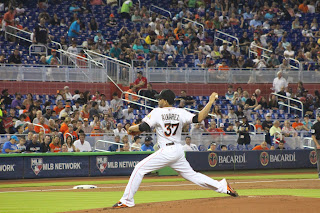 The winning run came on a bases loaded wild pitch by Putkonen that allowed Giancarlo Stanton to score from third base. Stanton originally reached base with a single.

Henderson had one walk, four strikeouts, hit Prince Fielder with a pitch then cruised to improve his record to 5-6. He threw 99 pitches and 66 were strikes.

It was a very unusual game in the sense that Alvarez was facing a pitcher that has two no-hitters himself speaking of Verlander.

The Tigers were resting most of their star players, but by no means am I taking anything away from the kid's accomplishment.

I didn't pay much attention to the pace of the game as I was working on a story and was dealing with technical issues getting online.

My photographer Candice Ebling sent me a text message that she was debating switching positions about the potential no-hitter, but opted to stay put by the Tigers Dugout.

That's when I started taking notice to what could be history.

Indeed that became the case.

Alvarez became the 282nd pitcher in MLB History to throw a no-hitter and he's likely to have some mementos sent to the Baseball Hall Of Fame in Cooperstown, NY.

Alvarez, who was born on April 18, 1990, became the first pitcher to throw a no-hitter in the final game of the season since Mike Witt in 1984 when he did it for the California Angels.

When no-hitters are thrown, in many instances it's by a pitcher that we've never heard of.

He was acquired by the Marlins along with six other players from the Toronto Blue Jays in a 12-player trade where five players went North of the Border. Three of the key players sent to Canada include Jose Reyes, Josh Johnson and Mark Buehrle.

Since the Alvarez no-hitter, these words have become more common for the Detroit Tigers. In Game 5 of the American League Division Series against the Oakland A's, Verlander went into the eighth inning with one. 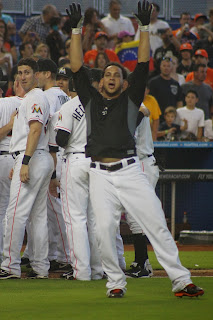 In Game 1 of the American League Championship Series in Boston versus the Red Sox, Anibal Sanchez took to the Tigers into the sixth and the bullpen carried a no-hit bid into the ninth inning. The Tigers were two outs away from making history. Detroit won the game 1-0.

In Game 2 of the ALCS, Max Scherzer took a no-hitter in the sixth inning before it was broken up against the Red Sox. The Tigers bullpen imploded in a 6-5 loss to Boston.

Nonetheless, these masterpieces don't happen often and they do indeed sneak up.

What made Alvarez situation so unusual was that he was sitting in the on deck circle when the freak play occurred and the celebration was as different as it could be.

But only in baseball just when you think you've seen everything, something else dazzles in amazement.

Who knows what this kid will accomplish in his career, but on this one autumn afternoon in South Florida, he dominated the headlines all over the country before the playoffs.

During this series, Miami couldn't have asked for a better result at the gate with the Tigers.

But for those that saw this finale, this is a day that they'll be talking about for years knowing they saw a youngster make a name for himself.

It will be interesting to see what future final games of the year will be like for the Marlins.

Now the question remains, how long will Alvarez remain with the team?

If you're a Marlins fan, the way they have fire sales with star players which has outraged the fan base, I'd find it hard pressed to see them get excited.

But they cheer them when they come back. Just ask Miguel Cabrera.