Now that the shock of the retirement of former Tigers Manager Jim Leyland has sunk in, the question remains, who will be given the keys to Detroit's Rolls Royce Starting Pitching Staff that President and General Manager Dave Dombrowski has assembled?

What manager gets to make up a line-up card with Miguel Cabrera, Prince Fielder and Victor Martinez?

While it's too early to predict who will be sitting in the Tigers Dugout, there is one thing that I hope the next skipper does differently to the now departed Leyland.

Fox Analyst Tim McCarver, who is retiring after the World Series hit a bulls eye when he said "that today's managers are prisoners of pitch counts."

This is so true and it's coming from a man that is a Hall of Famer, who caught two players that also have plaques in Cooperstown, NY.

McCarver was Carlton's personal catcher. He was behind the plate when Gibson defeated the Boston Red Sox in the 1967 World Series then back again as runner-ups when the Tigers defeated the Cardinals in the 1968 Fall Classic.

McCarver has also been awesome broadcaster. I've learned a lot by watching and listening to him. He was inducted into the Baseball Hall of Fame winning the Ford C Frick Award in 2012 which is in the Broadcasters Wing.

I totally understand a manager's desire to protect his pitchers. But a pitch count, please.

Also, we're in the day of the five man starting rotation therefore there is an extra day's rest between starts, thus I would think that complete games should still be common. The only time a four man rotation exists is in the playoffs.

These athletes spend more time in the weight room, have modern day medicine and trainers that work with them. By no means am I talking about steroids. I'm talking about technology and more resources to keep them healthy.

I hope the new manager realizes that by having more complete games that it reduces the dependency of the bullpen.

Once upon a time there were two and three inning saves. Nobody can tell me that these can't be a part of baseball again as they once were.

Going through five relief pitchers in two innings makes me sick especially when the starter is having success. For that matter using that many pitchers in a short period still makes me ill and while I understand managers using strategy, there is the fine line of over managing.

Baseball is easy to second guess and I'm not here to do that. I'm just trying to put things in perspective and any manager that has any kind of success in baseball to me is alright in my book.

I've said it before that one of the greatest athletes in pro sports Michael Jordan played it briefly, got smart by trading his cleats for sneakers and won more championships on the hard wood.

If I'm an old school traditionalist, then I'm guilty as charged.

If I'm a purist then I'm guilty as charged.

There is a reason that my beard and hair is gray.

I've seen a lot and figure to see plenty more before I'm done breathing both in life and in sports.

In the meantime, I'm not asking for much.

Even former Texas Rangers CEO and Hall of Fame Pitcher Nolan Ryan tried to have his team more conditioned to go deep into games.

During the Tigers 4-2 loss to the Boston Red Sox, there were a couple games that starters could have completed.

One that comes to mind is Game 2 when Detroit had a 5-1 lead and Max Scherzer was pitching a gem. 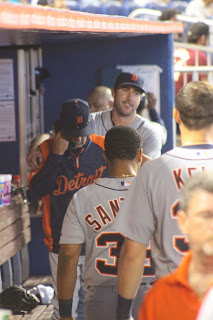 Max told Leyland he was finished, got pulled and the bullpen which is been a problem for Detroit all-season imploded thus the Tigers lost 6-5 in what turned out to be one of two key turning points in the series.

We've seen complete games from Justin Verlander. There is no reason to think we can't see a few more. I'm not saying a lot more but a few more from Verlander photographed in the dugout and others.

There is no crime in having a fresh bullpen.

I realize that today's owners have a lot of money invested into these young players.

But please tell me if Joba Chamberlain of the New York Yankees or Stephen Strasburg of the Washington Nationals have had the stellar careers they were expected to have.

Last year, the Nationals cost themselves a chance to advance deep into the playoffs because they had an innings count on the young hurler.

Manager Davey Johnson retired and it will be interesting to see what happens how a new pilot sails with Strasburg.

Chamberlain was considered a projected starter but has never been able to fill that role. He is a free agent and I have a feeling that while the Yankees let very few of them get away, Chamberlain could be pitching elsewhere in 2014.

Just as it will be when the Tigers hire their new manager.

I have a feeling that one of Dombrowski's key questions during the interview process is how he handles a pitching staff.

One piece of advice I have for the Tigers is to keep Pitching Coach Jeff Jones since he has the respect of the pitching staff and has won with it.

Other than that, Dombrowski doesn't need any advice from us since he's had a great track record for many years.

The only thing he has left to accomplish is win a World Series for an owner that's is 84 before time runs out on Mike Ilitch health wise.

I'm pulling hard to get this championship as are so many others.

I'm sure that in a perfect world that when Commissioner Bud Selig retires after next season, he'd love to hand the World Series Trophy to Ilitch. I doubt that anyone will debate this or the fact it will take some time for Dombrowski to get this hire right.