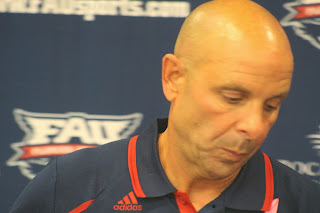 On October 30, 2013., he resigned and was escorted off campus by police just a few days before the Owls Homecoming Game against the Tulane Green Wave. He took Defensive Coordinator Pete Rekstis with him.

If there was ever a coach that made a first and lasting impression for all of the wrong reasons, Pelini is that individual.

Both coaches were forced to resign because they were caught using drugs.

Pelini attended a recent social event at which Marijuana was used.

FAU officials released sworn affidavits from two people---including a member of Pelini's staff---alleging that the football coach was using Marijuana and Cocaine.

FAU Assistant Matt Edwards told officials that he witnessed Pelini smoking Marijuana during the Owls bye week on October 19, 2013 in Key West, Fla. This was also backed up by Allison Stewart.

Pelini's contract specified that if he used "Any Narcotics, Drugs or Other Controlled Substances, he could be subject to firing." Since he wasn't fired, FAU may be able to recover $500,000 because the coach terminated the contract himself. 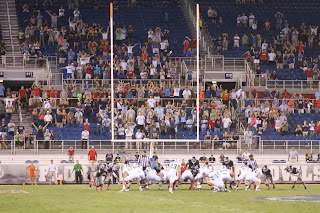 Before FAU's 24-23 loss to Marshall on October 12, I was riding up the elevator with FAU Athletic Director Patrick Chun and was tempted to ask him how much time Pelini had to turn this program around. But I opted to save this question until after the season so Chun could make a complete evaluation.

Pelini made that decision easy as his tenure as Owls Coach ends with a 5-15 record. Judging by Pelini's salary, FAU paid a lot of money for a handful of wins. This drug exit could likely get him black balled from a future head coaching job.

FAU hired a man that's the worst ambassador to the program with bad accessibility and alienated the media which is a reason why there are a lot of empty seats in the press box. In the future, I'm sure winning will fill some of those seats, however, Pelini never gave himself a honeymoon period because he got things started on a bad note.

This may not be a good year for the Pelini family because it appears brother Bo is on the hot seat at Nebraska because he continues to have trouble controlling his temper.

These two remind me of a "Pothead and a Hothead." Carl served on Bo's staff at Nebraska before he accepted the head coaching position at FAU. 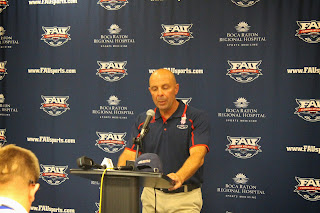 As I look at this coaching situation, Pelini did Chun a favor in the sense because the athletic director inherited this "Mysterious Moron" and can now look for his own coach.

This is the third homecoming game at FAU Stadium and there have been three different head coaches.

It began with Howard Schnellenberger, then Pelini and now Offensive Coordinator Brian Wright is roaming the sidelines for the final four games.

Wright is on House Money because he has a chance to show the Owls administration what he can do by trying to rally the program under difficult circumstances. Giving him a chance was the right move instead of asking Schnellenberger to come out of retirement and work with a staff he hasn't worked with before.

During halftime of the Owls contest against Tulane, Chun added, "Wright is definitely a candidate for the job with four games and five weeks left in the season." Chun wouldn't comment on the search beyond Wright.

But I have a feeling that in the background, Schnellenberger will have some input in the coaching search as he attempts to get this program back on track.

Schnellenberger built this program from scratch and I wonder what he's thinking now.

FAU is a good job because of the strong South Florida recruiting base, a nice stadium that can be expanded and the potential is unlimited. The Owls are seeing more of their players reach and play in the NFL.

FAU upgraded to Conference USA and I wouldn't be surprised if there is another conference change down the road. But first things first.

For what FAU paid Pelini, there is no reason to think that a big name wouldn't want to take this job. The potential is unlimited.

The Owls rallied around the Pelini controversy as the players took their last names off the back of their jerseys and put FAU instead as a sign of unity.

That unity carried over with the Owls performance on the field as FAU took advantage of four interceptions as they drilled Tulane 34-17 in the first ever meeting between the two schools. The Owls improved their records to 3-6, 2-4 while Tulane dropped to 6-3, 4-1.

Wright is now 1-0 as a head coach and his team celebrated with a Gatorade Drenching after the contest.

Watching Wright in his first post-game press conference was even more impressive. His answers were candid, his energy and enthusiasm was high.

He certainly seemed like a guy who plans to coach this program longer than four games and gave Chun and the rest of the FAU Administration plenty to think about.

Offensively, his team out gained Tulane 331-167 and the defensive pressure forced four interceptions.

He even used a trick play on offense that saw Detroit Wide Receiver Daniel McKinney throw a 30-yard touchdown pass to William Dukes.

Wright utilized the skills of QB Jaquez Johnson well as he gained 142 yards rushing and scored two touchdowns, one was a 49-yard scamper.

The Owls have a bye week to try to put this coaching controversy behind them as Wright has a chance to adjust to his interim that he hopes will be his permanent role.

The FAU situation reminds me about what happened to the 1989 Michigan Wolverines Basketball Team. Head Coach Bill Frieder  accepted a job to coach at Arizona State. Michigan Athletic Director sent Frieder to Tempe and promoted assistant Steve Fisher to the Wolverines the NCAA Tournament. The Wolverines won the tournament and Fisher was hired as the permanent coach. 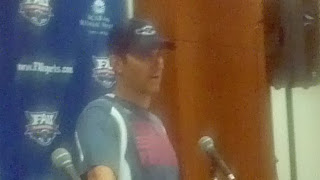 Now Wright has the task of trying to guide FAU to a bowl game.

The final three games are against Southern Mississippi 0-8, New Mexico State 1-8 and FIU 1-7.

There is no way that Wright will allow this team to let down, but if the Owls play as well against these opponents as they did against a strong football team like Tulane, I like their chances of getting to a bowl game. I have a feeling their coaching search won't be as long as it appears at this present time.

Nonetheless, it will be interesting to see how this plays out. But I will say this, Wright did get a loud applause from the media after the game, something that was unimaginable during the Infamous Pelini Era.

Wright can only learn from Pelini when dealing with the press, "Learn What Not To Do" and if he figures it out quickly. If he makes himself very accessible to the public and media then he'll have a bright head coaching future.

When I first heard the news and spoke to Owls Assistant Media Relations Director Justin Johnson, I told him that when this controversy clears, the departure of Pelini will be the best thing that ever happened to this program.

The early returns are good and it will be interesting to see how this teams rallies around their new coach.

Good Riddance Carl Pelini. I knew you were a bad hire in the first place and I'm glad that your mysterious behavior and drug abuse led you to a one way ticket out of town.

You blew your only head coaching opportunity that you'll ever get. Might be time to call brother Bo so we can see the "Hothead get re-united with the Pothead."

We'll see if he smokes a joint if his former team wins a bowl game as another coach reaps the benefits of his recruiting.

The guy can't pull his hair out because he doesn't have any.

Scott Morganroth can be reached at scottsports33@aol.com.
- November 02, 2013