There aren't too many things the USC Trojans and FAU Owls have in common, but there is one major similarity between both universities.

Each school made mid-season coaching changes and the early returns have been excellent.

USC fired Head Coach Lane Kiffin after a 62-41 loss on the road to the Arizona State Sun Devils which dropped the Trojans to 3-2 on Sept 29.

Kiffin was replaced by Ed Orgeron, who has made the most of his opportunity and the interim coach is 6-1 including a 20-17 upset victory over No. 4 Stanford.

If Orgeron continues to win, I wouldn't be surprised to see him buy a home overlooking the Pacific Ocean.

Here in Boca Raton by the Atlantic Ocean, Brian Wright is making the most of his opportunity as well.

After taking over for Carl Pelini, who resigned because of drug use, Wright rallied the Owls to an impressive 34-17 Homecoming win over the Tulane Green Wave (6-4) on November 2 at FAU Stadium.

The Owls took advantage of the bye week and then returned to action to blast Southern Mississippi (0-10) on the road 41-7 and improved to 4-6 overall and 2-0 under Wright.

The inspired football continued Saturday, as FAU faced the Independent New Mexico State Aggies (1-10) and pounded them 55-10. This was the first meeting between these schools and New Mexico State will be playing in FAU's old conference in 2014 joining the Sun Belt.

Should the Owls defeat FIU (1-10) Friday and improve to 6-6, they'll become bowl eligible.

A win would give Wright a 4-0 mark and Owls Athletic Director Patrick Chun will have a tough decision if he decides to look for another coach or retain and keep the continuity with Wright.

Against New Mexico State, FAU cruised to a 21-0 lead by the beginning of the second quarter and took a 28-7 lead at halftime. Owls QB Jaquez Johnson threw for 200 yards and two touchdowns. One of Johnson's touchdown passes was a 64-yard strike to Lucky Whitehead.

Johnson ended the game with 321 yards, three touchdowns and had a career high in rushing yards with 60. This is the fourth consecutive week Johnson has led all rushing for FAU. 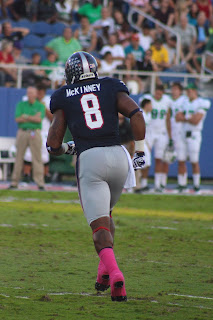 Detroit native Senior Wide Receiver Daniel McKinney led FAU with three receptions for 83 yards with a long of 48 yards in the opening half.

McKinney, 6-0, 205, finished the contest with five receptions for 138 yards. This was his game high for the season.

When the game was over, the FAU win was the largest margin of victory against a Football Bowl Subdivision opponent in the program's history.

It's FAU's third straight win in double figures and after the game, Wright refused to take any credit and deflected all of the praise to his players.

"I told my players that we had to go 1-0 each week and that's our goal this week is to go 1-0, " Wright said. "We're on a mission. The players are enjoying playing football, they have fun preparing during the week, and they are having fun showing up on Saturday and playing, and it's fun to watch them. And I just feel a sense of togetherness out there as a unit. It feels like a football team out there and that's fun to watch.

"You find out the character of men when they rally around adversity. These players and seniors deserve the best effort and this team is resilient. We don't care if we run or pass, we just want to win football games."

These late season runs used to occur when Howard Schnellenberger was coaching and leading the team to a pair of bowl wins.

The last time FAU finished 6-6, the Owls defeated FIU which led to a Motor City Bowl bid and a win over Central Michigan in Detroit.

Time will tell if this happens again.

But one thing is certain, Pelini must be going crazy that a young interim coach is reaping the benefits of the players he recruited and is winning with them.

This interim coach will either be the next permanent coach or certainly one of the hottest prospects out there for another program.

It will be interesting to see how this plays out in the coming weeks.

Scott Morganroth can be reached at scottsports33@aol.com.
- November 23, 2013