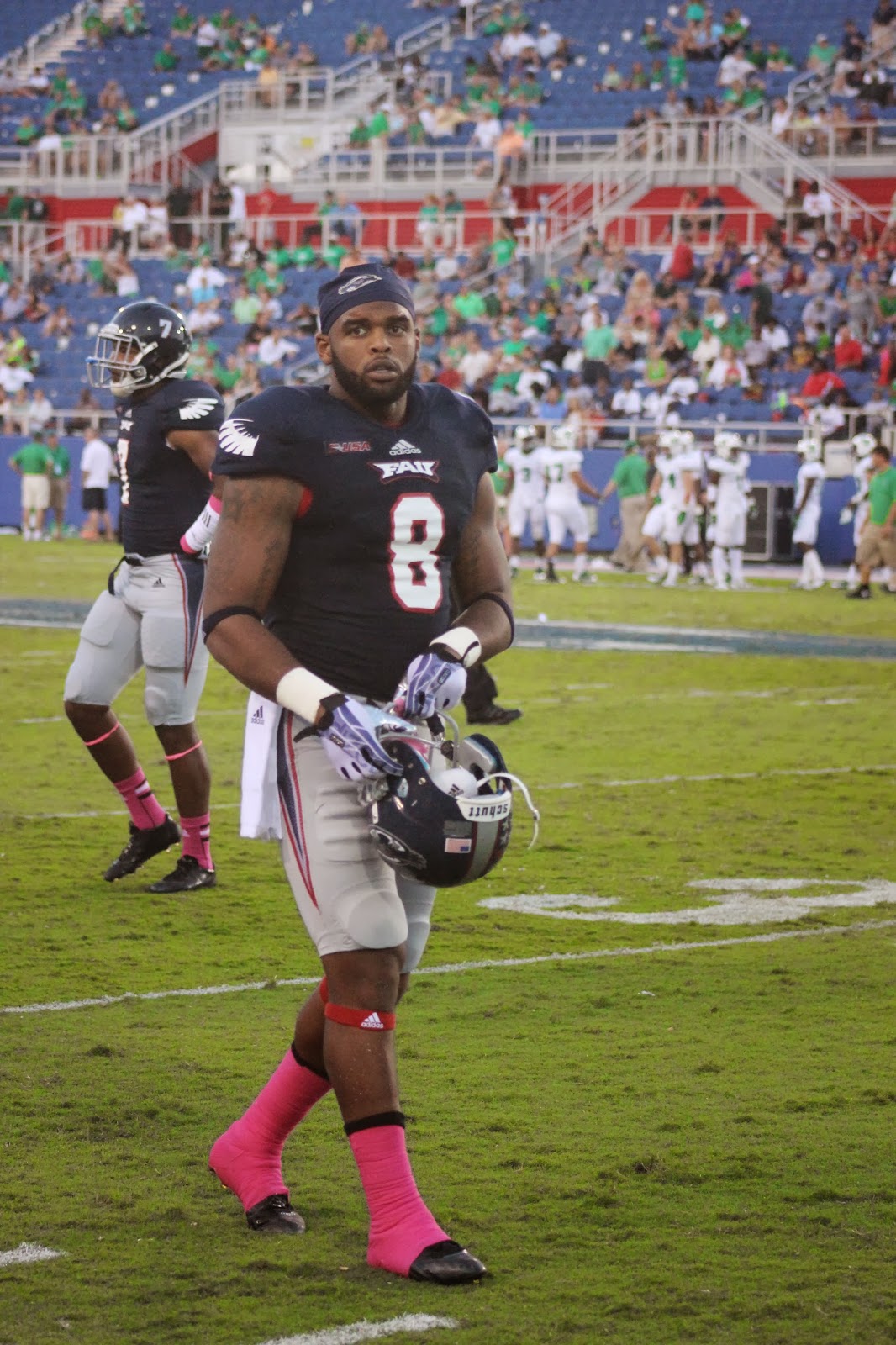 He may not get the recognition as Washington Redskins Running Back Alfred Morris, Arizona Cardinals Tight-End Rob Housler, Houston Texans Wide Receiver Lester Jean or Tennessee Titans Quarterback Rusty Smith, but Daniel McKinney could be a player to watch in the 2014 NFL Draft.

McKinney was a linebacker at Melvindale High School and as a senior, he recorded 115 tackles, 16 sacks, three forced fumbles and four interceptions.

From Melvindale, McKinney attended City College of San Francisco, a Junior College in California, where he would help lead the Rams to a State Championship, which caught the eye of the West Virginia Mountaineers.

Due to a mix up, he wasn't able to attend West Virginia.

McKinney was recruited by FAU's Associate Head Coach and Recruiter Jeff Sims, who needed a slot receiver for the Owls new Spread Offense.

Unless FAU (6-6) qualifies for a bowl game, in what appears to be his last college contest, McKinney caught four passes for 75 yards in FAU's 21-6 win over FIU Friday in the Shula Bowl.

His progress has drawn tremendous praise from Interim Head Coach Brian Wright, who has guided the Owls to a 4-0 record after the departure of Carl Pelini.

"Dan is a durable guy and I mean he keeps playing. The thing I'm most proud about Daniel is some of these football games there were a lot of plays scripted for him within the game plan and really the last two weeks, he has not touched the ball as much as we would like him too offensively," Wright said. "And he has not said a word; all he asked is what else can he do and what he can do on special teams to help?

McKinney took the time in this Question and Answer Interview to describe his Unique Road to the FAU Owls from Detroit.

Q: How are things working out for you here in Boca Raton?

A:Thing are working out real fine. I met with the coaching staff, I really liked it and they welcomed me as one of theirs and treated me like family.

Q: There were a lot of Michigan schools that you could have attended, how did you make it to Florida Atlantic University?

A: The only time I knew about FAU was when they played in the Motor City Bowl in Detroit in 2008 at Ford Field. That was the last time I heard of them until I was getting recruited by Coach Sims. I didn't have the grades coming out of high school, so I made the best of the situation to go to Junior College. This helped me grow up, deal with certain things and gets me ready for the next level of football. I was actually doing stock and merchandising for shirts for the Motor City Bowl and watched the game.

Q: Lets talk about the 2013 season, starting with the mid-season coaching change. What has it been like?

A: There has been no difference between the two coaches. Same staff. We've instilled more of the "Us Factor" and we run the practices the same, a couple tweaks here and there. It's about Us and not about the Coaches we have.

Q: What type of progression have you made from the beginning of the season until now?

A: Our quarterbacks have learned to take what the defense gives them, and if we can run the ball for 500 yards we'll run it. If we can pass for 700 yards we'll pass it. If we can utilize a balanced attack, then we'll just use a balanced attack. I just get in where I fit in and make plays when I need to. I also need to be a leader. When I don't get the ball, I have to be mature and handle the situation.

Q: What's your overall experience been like at FAU?

A: It's been great. We've had to go through a couple things, but we're trying to turn the program around and laying the foundation for the new players coming in. This program is going to be on the rise. This should be one of the top programs since there are a lot of great athletes in South Florida. Who wouldn't want to come to Florida and play football?

Q: What does the future hold for Daniel McKinney?

A: I will be pursuing a professional career after this and plan to take full advantage of the School's Pro Day Next Spring.

We'll know whether the Owls move to Conference USA pays dividends now that FAU could play in a bowl. where there is a small payday.

For McKinney, 6-0, 205, there is one more last impression to make for scouts to see if he gets invited to an All-Star Game or the NFL Combine in Indianapolis.

Scott Morganroth can be reached at scottsports33@aol.com.
- December 03, 2013