There were a lot of interesting story lines during the Penn State Nittany Lions recent visit to Camp Randall Stadium on November 30, 2013, which is the fifth oldest stadium in the country.

There were two members from the Orange Bowl Committee scouting the Wisconsin Badgers because it appeared to be quite possible that there would be three Big Ten teams heading to BCS Bowls.

Normally, the Atlantic Coast Conference Champions would get an automatic Orange Bowl bid. As it turned out, two Big Ten teams made it to BCS Bowl games.

Ohio State was defeated by a hot Michigan State squad 34-24 (12-1, 8-1) in the Big Ten Title Game Saturday and the Buckeyes are heading to South Florida.

The Big Ten is always a Big Draw in Florida.

Ohio State, Wisconsin, Iowa (Outback Bowl) and Nebraska (Gator Bowl) are playing in the post-season in The Sunshine State.

The Badgers took a seven-game winning streak into their contest against Penn State.

That was until the Nittany Lions figured this game was their bowl game and stunned the Badgers 31-24 in front of 78,064 fans. Any chance of a BCS Bowl ended with an inspired Penn State effort which allowed the Nittany Lions to improve to 7-5 and 4-4 in the Big Ten.

Wisconsin lost at Camp Randall Stadium for just the third time in the last four years and is now 61-7 at home since the start of the 2004 season. UW entered the game with the third-best home record in the nation since 2004. 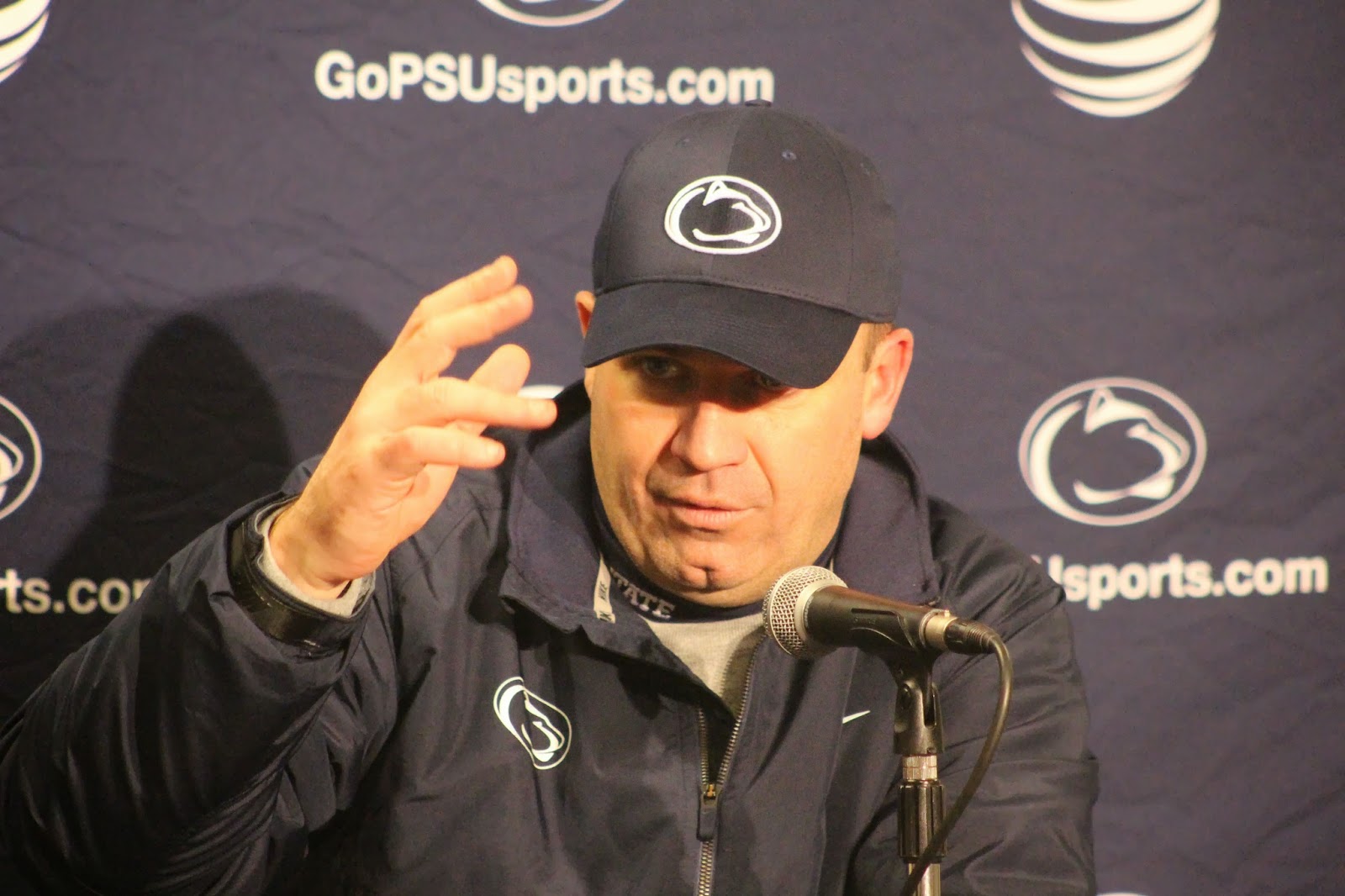 "So I think that those kids took it personally. You know, you take those things personally. It's just the way it is, that's football. I really feel good about the seniors that they were able to go out on a winning note."

Because of the Jerry Sandusky Child Abuse Sex Scandal, Penn State is ineligible for the post-season. 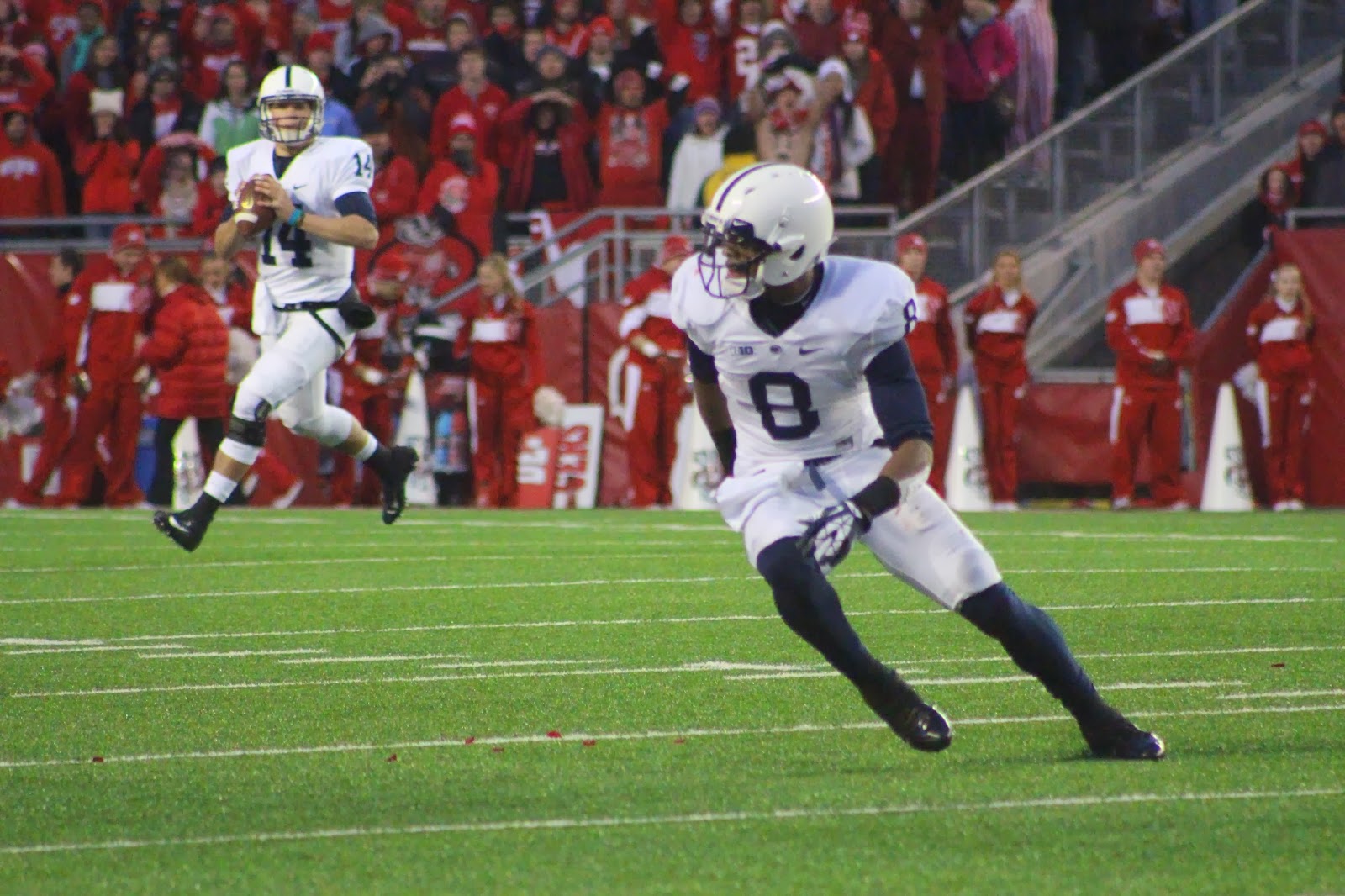 Penn State ended the season on a winning note thanks to the play of freshman quarterback Christian Hackenberg, who went 21-30, for 339 yards, four touchdown passes and zero interceptions.

Wisconsin needed just 34 rushing yards to break the school record of 3,309 set last season in 14 games. The Badgers added 120 and set a new school record with 3,396 yards in 12 games. These numbers will increase in Wisconsin's upcoming bowl game. The previous 12-game mark was 3,305 set in 1999.

There are two Metro Detroit Players that are performing well for Penn State. 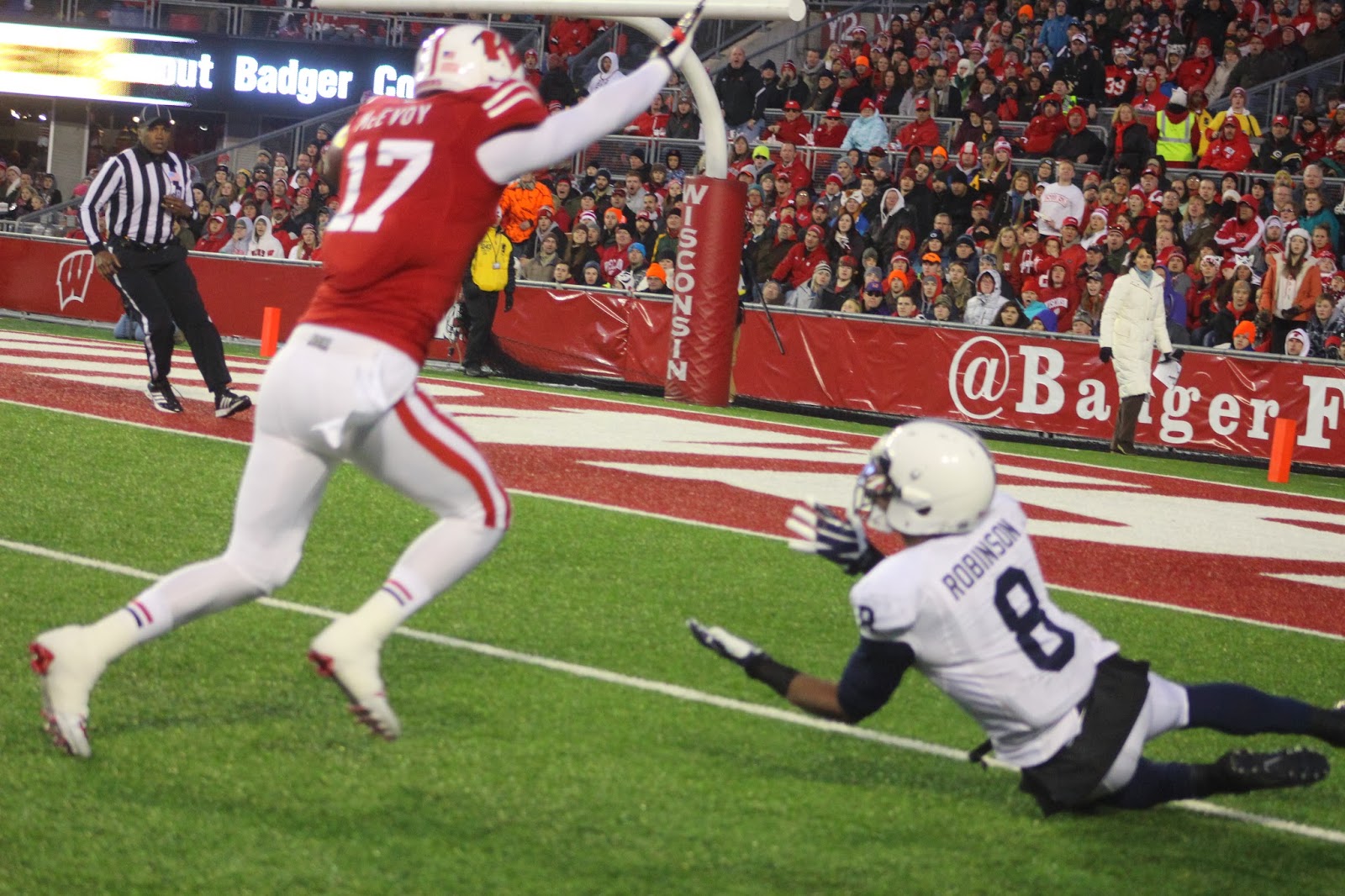 Entering the final week of the regular season, Robinson is third in the NCAA with 1,310 receiving yards and fifth in the nation with 119.1 yards a game. His 89 catches are seventh in the NCAA and his 8.1 yards are eighth nationally. He's also has six touchdowns.

Against the Badgers, Robinson had eight catches, for 122 yards. He finished the season with 1,432 yards which is a school record, and also added another school record for receptions in a single season compiling 97 receptions.

Despite one year left of eligibility, it is likely that he'll declare for the 2014 NFL Draft.

O'Brien wasn't thinking about whether Robinson would be back and said, "He made a lot of plays again tonight. I think even the plays that he didn't make it helped because there was the threat of him making a play and I think that always helps in the running game, which it was very hard to run the football tonight.

Red-shirt Junior C.J. Olaniyan has started 12 career games including every game in 2013 at defensive end. He ranks second in the conference with three forced fumbles, is tied for 10th in tackles for a loss (11) and is tied for ninth in the Big Ten in sacks (5.0).

Olaniyan, who is from Warren, MI and played for Warren Mott High School, Earned Big Ten Defensive Player of the Week honors with eight total tackles, four assisted and four unassisted, had 2.5 sacks and forced his first career fumble in the second quarter of Penn State's 43-40 (4OT) home win over No.18 Michigan on October 12.

Going into the Badgers game, Olaniyan had 25 unassisted tackles. 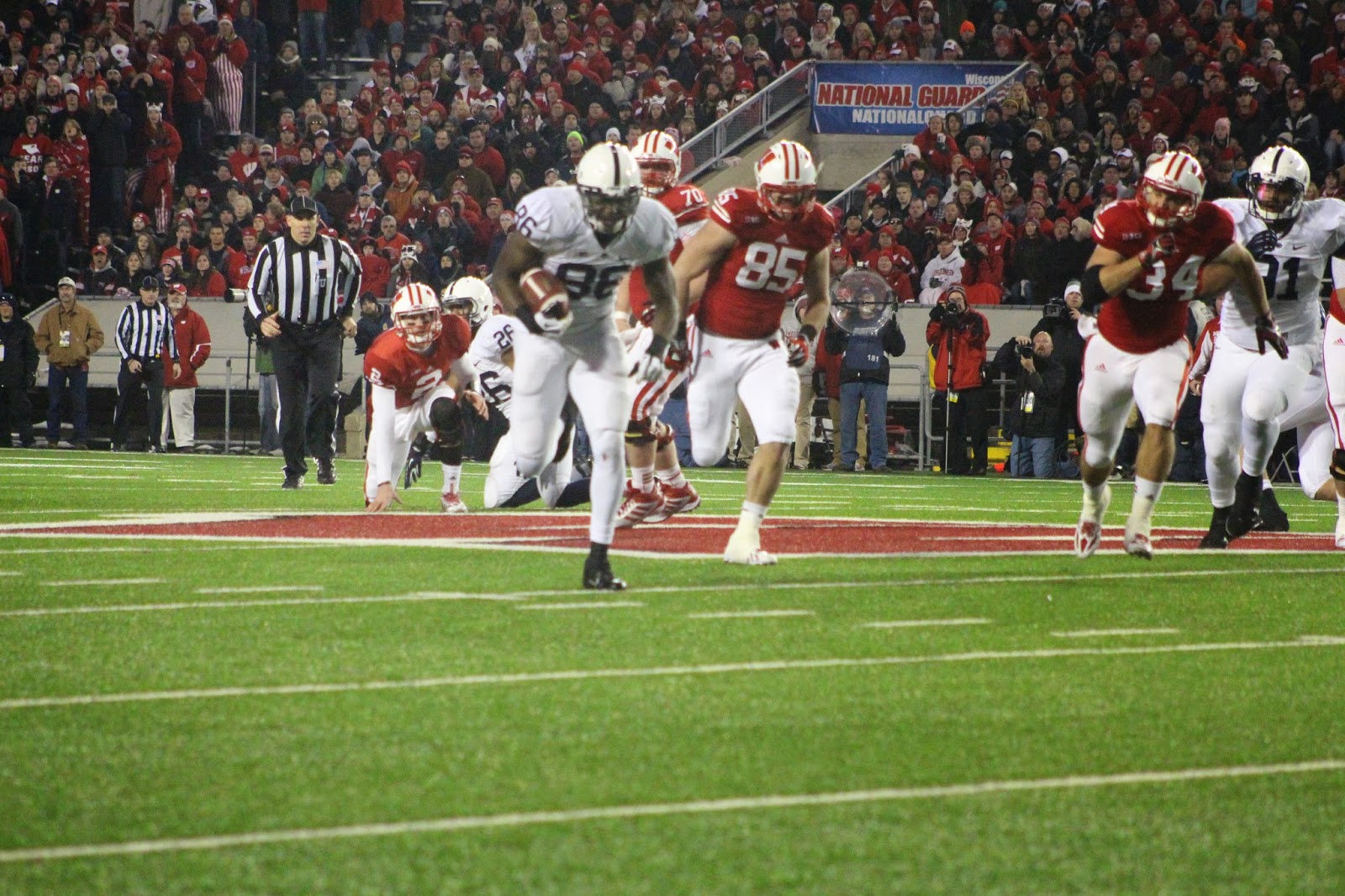 Against Wisconsin, Olaniyan had a 33-yard interception return that led to a Penn State 28-yard field goal which gave the Nittany Lions a 24-14 lead. He also had three QB Hurries.

"He's had a good year for us," O'Brien said. "He's made a lot of plays, is an instinctive player, has played much better this year than last year. C.J. has another year for us and we're excited about that. He's made key plays for us all year in the games we've won."

Olaniyan knew that there were plenty of Michigan Schools he could have attended and said Penn State was simply a better fit. 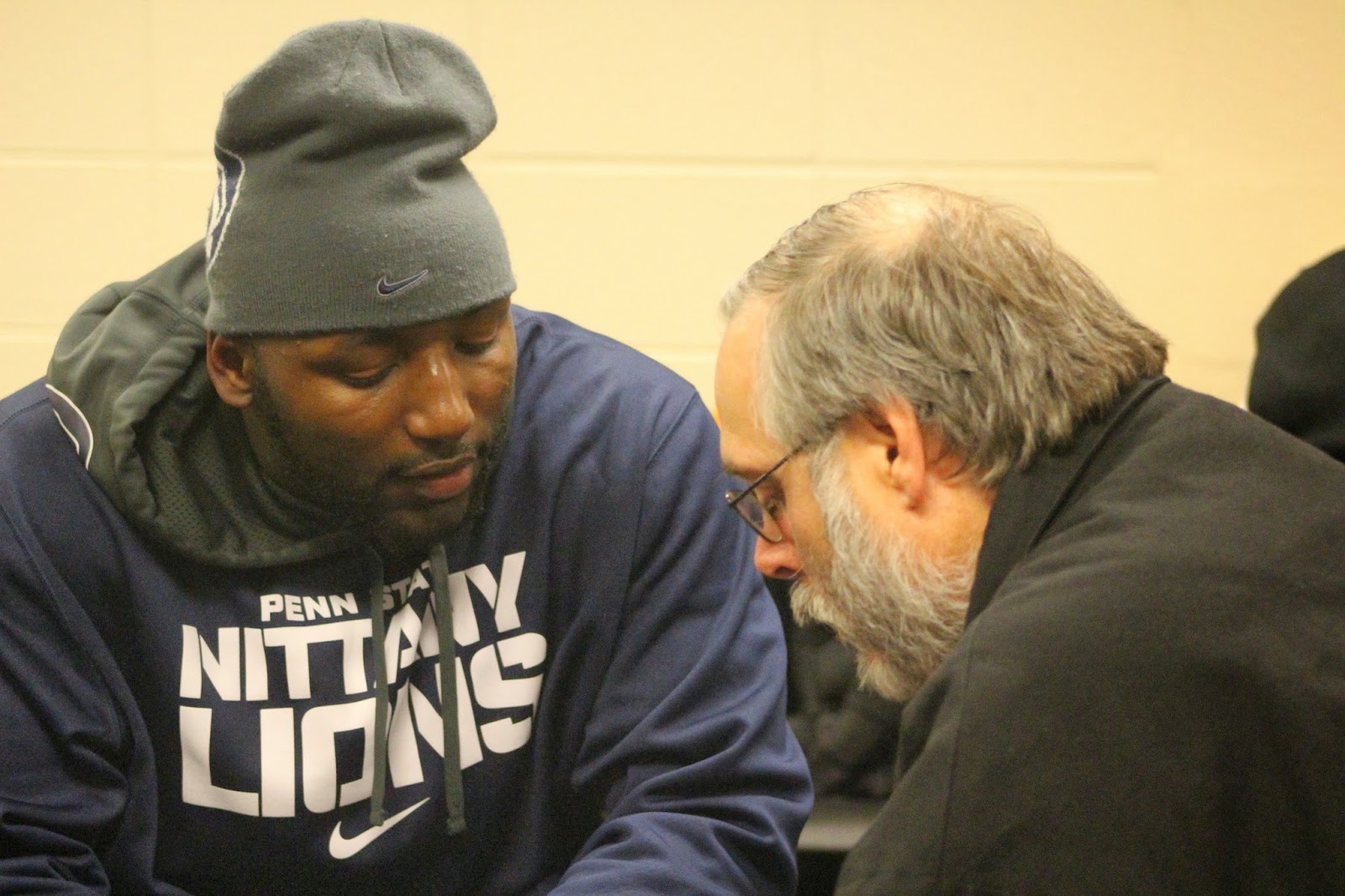 "It was all about the visit and I walked around the facilities and they were fine," Olaniyan said. "When I talked to coach J (late-Joe Paterno), I knew this was the place I wanted to be. When I came to Penn State, it had to do with the people and the fans. By them (NCAA) taking away the bowl games, it didn't effect me much because I had the opportunity to play in front of our great fans. That's all that mattered to me."

When the NCAA hammered Penn State with major sanctions in the Jerry Sandusky Child Abuse Sex Scandal, this would have been a perfect opportunity for Olaniyan to leave. 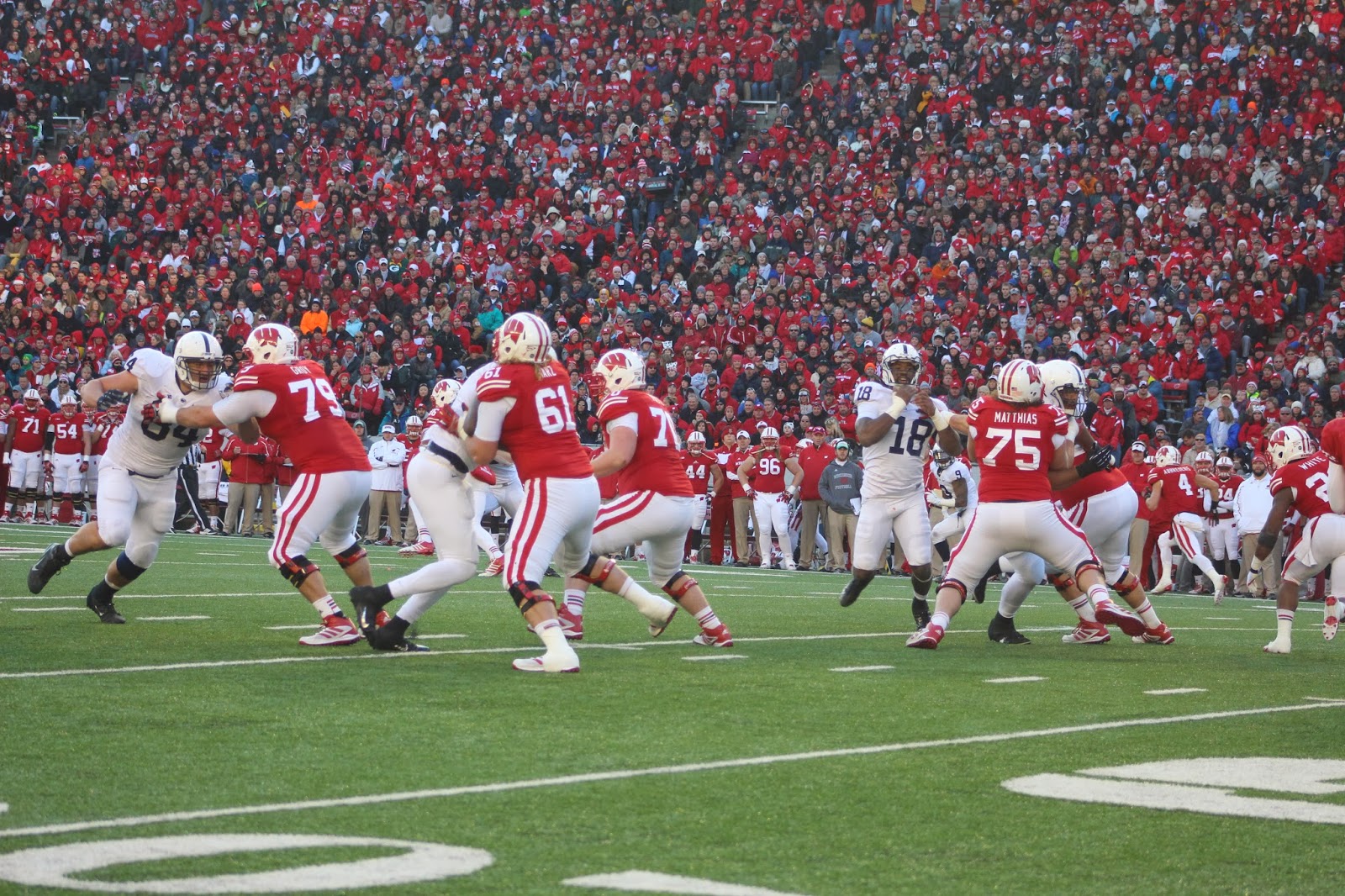 But he knew that the hiring of former New England Patriots Offensive Coordinator O'Brien's NFL connections would be helpful in his pursuit of a professional career.

"He's going to tell you straight up what you need to do to improve," Olaniyan said. "He won't tell you want you want to hear, but what you have to hear. He will tell it like it is. He won't lie to you. He's been in the business a long time."

There are two players on Wisconsin's roster that are from Michigan.

Senior Tight-End Jacob Pedersen is from Menominee and Senior Offensive Lineman Zac Matthias (No. 75 in photo above) is from Hemlock. Matthias is 6-5, 318 pounds. 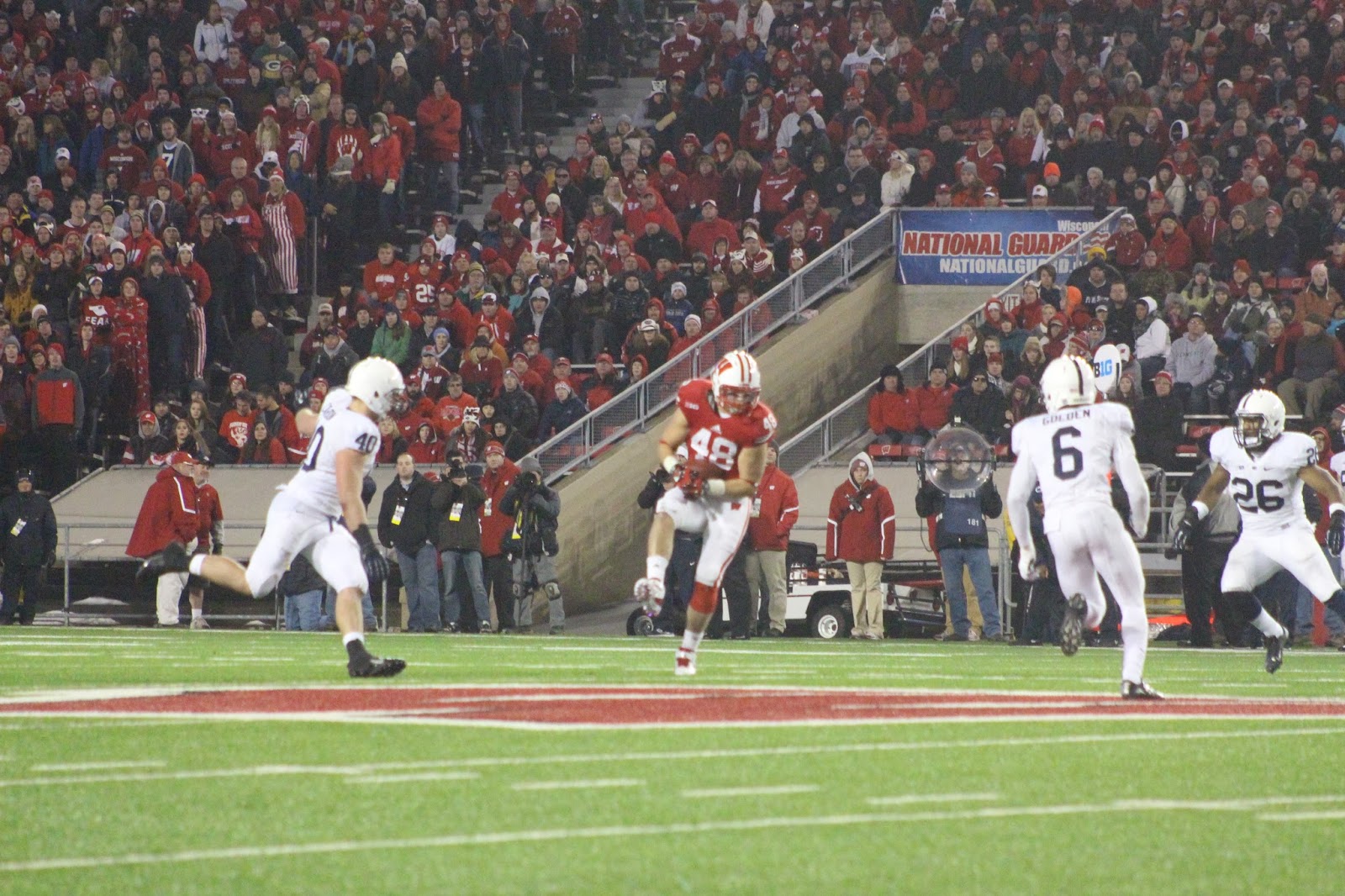 Pedersen had four receptions for 64 yards against Penn State. He finished with 501 yards this season. In his four years with Wisconsin, he amassed 1,344 yards and 17 touchdowns. Pedersen was a captain for his final home game in red.

Interesting Note: Thanksgiving Weekend wasn't a good one for Wisconsin based teams facing Lions nicknames. Wisconsin lost to the Nittany Lions while the Green Bay Packers went to Detroit and were thrashed by the Lions 40-10 at Ford Field.