The last time we saw the Wisconsin Badgers play on November 30, 2013 in Madison at Camp Randall Stadium, there were some interesting story lines against the Penn State Nittany Lions.

The game temperature was 42 degrees and the winds were blowing Southwest at 10 mph.

The Badgers were vying for a position in a BCS Bowl game, but Penn State's 31-24 win sent Wisconsin (9-3) to the Capital One Bowl in Orlando instead of a possible spot in the Orange Bowl In Miami. 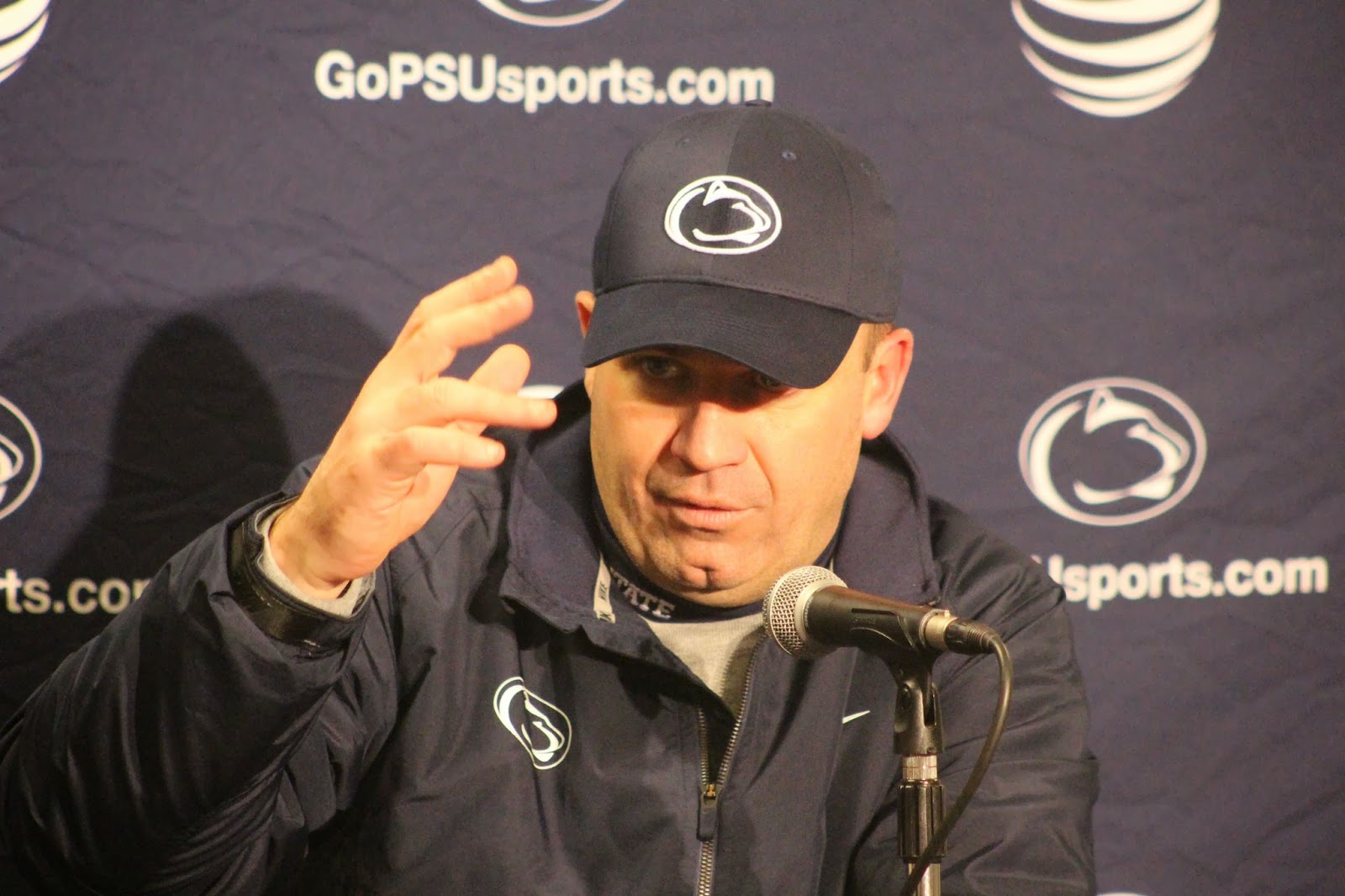 As it turns out, Penn State's win was the last for Coach Bill O'Brien, who became the head coach of the Houston Texans.

The walk from the Press Parking Garage in Madison to the stadium was about 35 minutes compared to the five minutes at the Florida Citrus Bowl in Lot A.

Weather Conditions for the Capital One Bowl were 64 degrees with winds seven mph along with a misty light rain that had ponchos available for the photographers to stay dry.

December 30, 2013 was Black Monday in the NFL. The first coaching casualty hit the Washington Redskins as Mike Shanahan was fired.

South Carolina Gamecocks Coach Steve Spurrier piloted the Redskins from 2002-2003 and he was 12-20 in two seasons before re-resigning on December 30, 2003 with three years and $15 million left on his contract.

He took 2004 off then landed with the Gamecocks in 2005 where he's taken this program to higher levels compiling a 76-39 record going into the Capital One Bowl Game against the Badgers.

Spurrier has guided South Carolina to a 10-2 mark in 2013. This is Spurrier's third straight 10-2 record going into a bowl game.

So what would give on January 1, 2014 against Wisconsin? Would the Badgers get their ninth 10-win season in school history and fourth in five years?

The Badgers entered the game as the eighth best rushing team in the nation with 3,396 yards with a 283 average. Wisconsin featured multiple running backs that averaged at least 100 yards a game in sophomore Melvin Gordon (122.2) and senior James White (111.4). 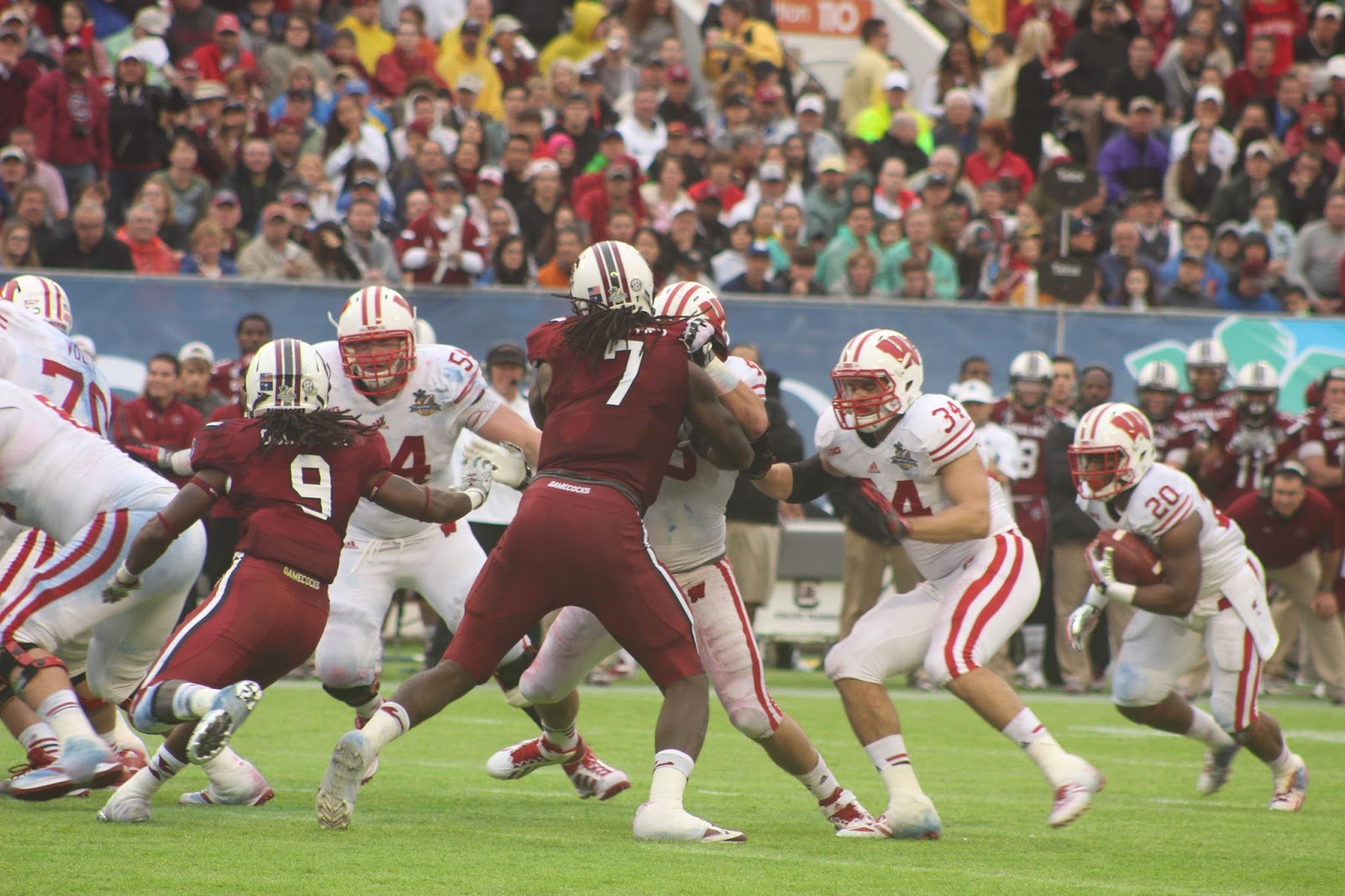 White wears No. 20 and Detroit Lions fans remember that a Hall of Fame Player named Barry Sanders wore this number.

Wisconsin is currently 2-0 in the Capital One Bowl with their last trip here in 2006.

UW was victorious in its last game in Orlando scoring a 20-14 win over Miami in the 2009 Champs Sports Bowl, and is 3-1 all-time at the Florida Citrus Bowl Stadium.

As it turned out, there were no crunching hits by the 6-6, 274 pound, Clowney, (Photographed wearing No.7) who hails from Rock Hill, South Carolina. 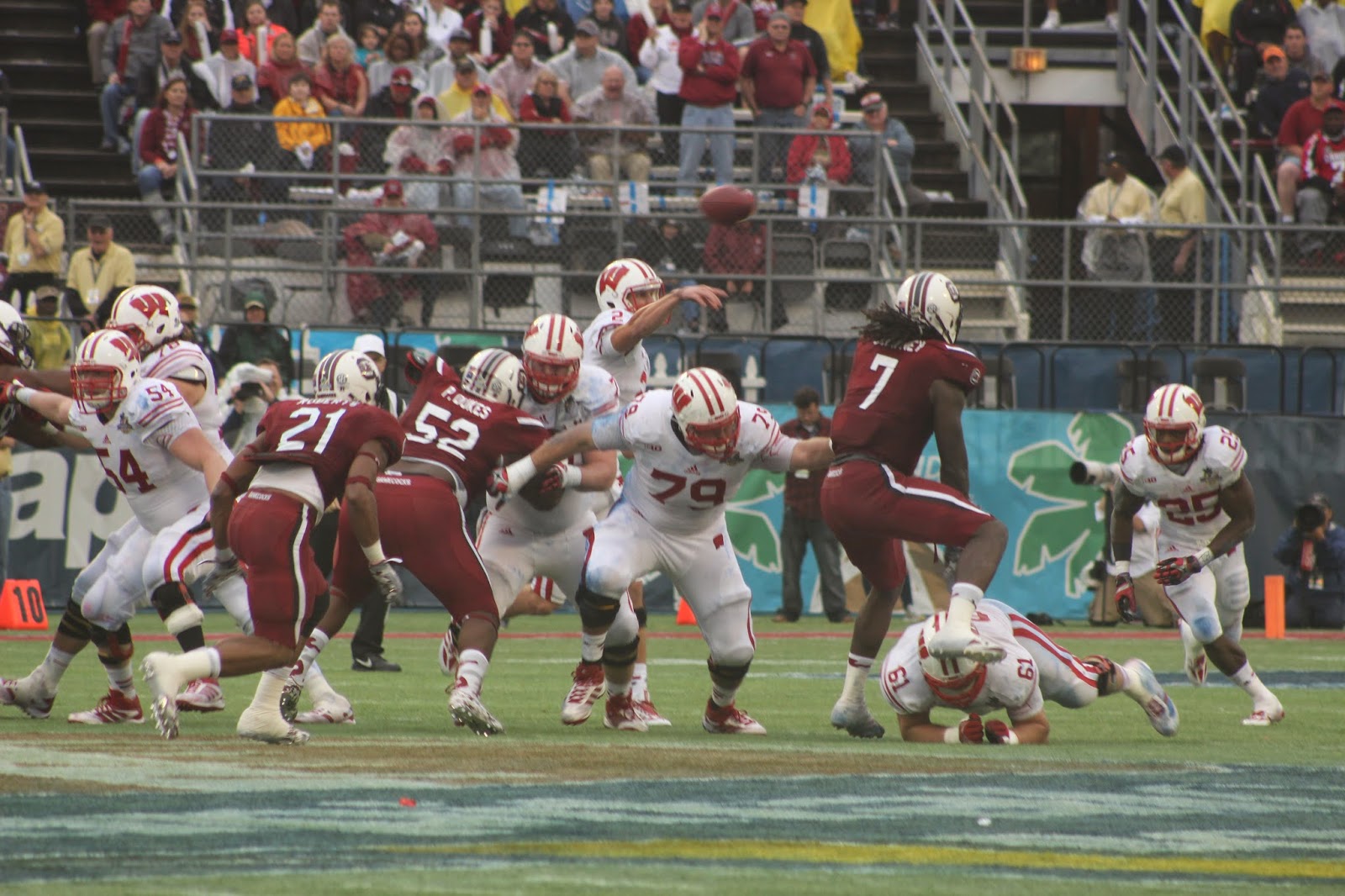 Instead, it was the Connor Shaw Show as the senior QB lit up the Badgers secondary by throwing for 312 yards and three touchdowns to defeat the Badgers 34-24 in front of 56,629 fans at The Citrus Bowl.

Shaw was named the Capital One Bowl MVP. It was his first 300-yard passing game of the season. He finished his South Carolina career with 27 wins as a starting quarterback as the victory extended a school record he extended earlier this season.

Shaw (Photographed wearing No.14) became the fourth player in school history to surpass the 6,000 career mark with 6,074. 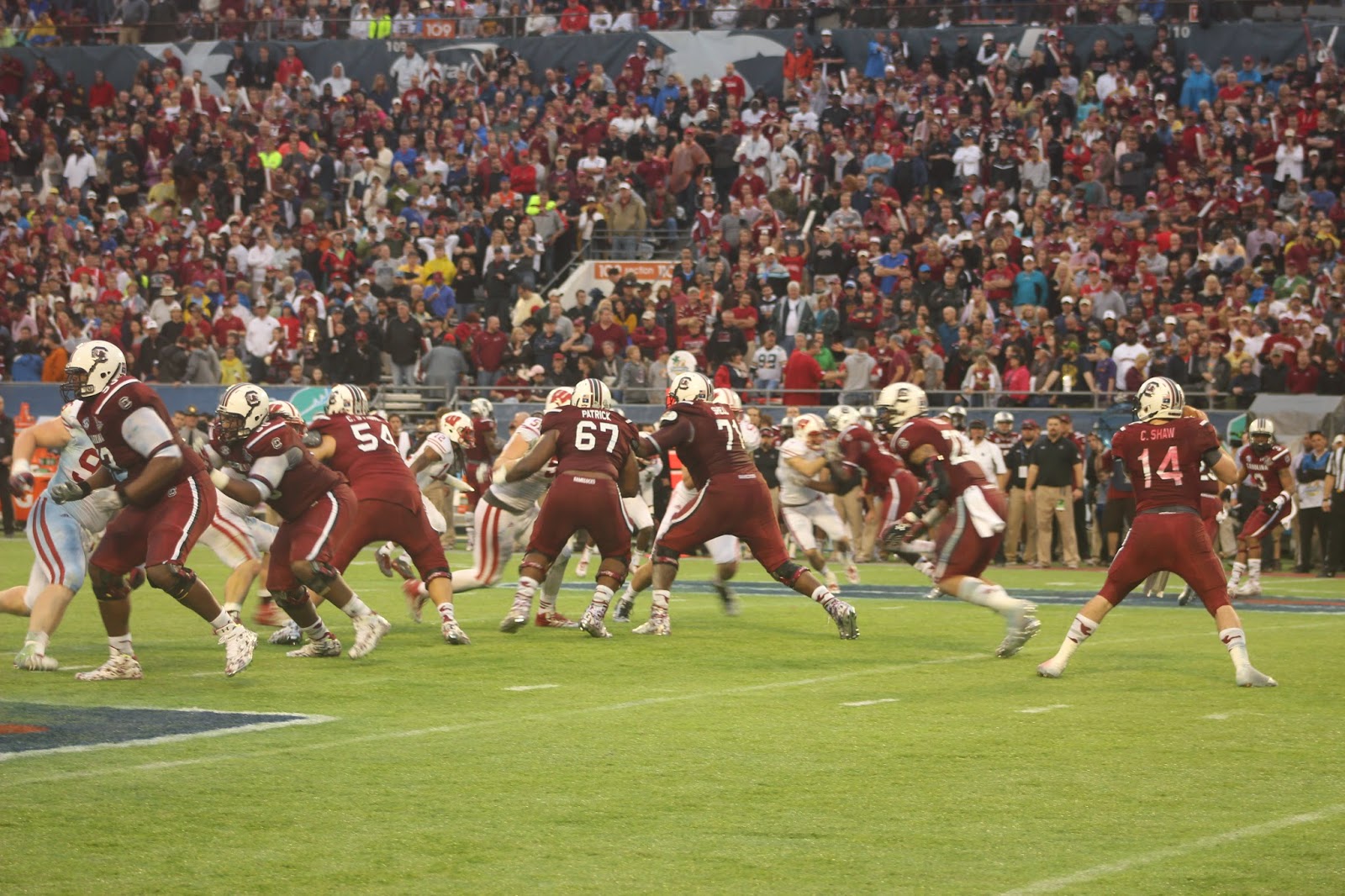 The Flowery Branch, Georgia native, was 22-25 and had only three incomplete passes and sacked just once. He also rushed for another 47 yards and a touchdown. Clearly, a poised hybrid signal caller.

The Wisconsin loss dropped the Badgers to 9-4, 2-1 all-time in the Capital One Bowl and 3-2 in the Florida Citrus Bowl Stadium.

There were no hits that would earn an ESPY Award on ESPN.

Clowney had five tackles, four solo and one assist. He also had two break-ups and one quarterback hurry. Clowney's next football activities figure to be his Pro Day, and the NFL Scouting Combine.

After the game, Clowney wasted no time by announcing his intentions that he was making himself eligible for the NFL Draft.

According to many draft experts, Clowney is projected as a top five selection.

Ball will be playing in the Super Bowl on February 2 in New York/New Jersey at MetLife Stadium.

For White, it was his 18th career 100-yard game, tying him with John Clay for sixth place on Wisconsin's all-time list.

The Dynamic Duo of Gordon and White made history with their combined 250 yards rushing. They became the single-season all-time leading rushing tandem. Gordon finished with 1,609 yards while White had 1,444. Their combined total 3,053 yards are better than the FBS record of 3,004 set by Nevada's Cody Fajardo and Stefphon Jefferson in 2012. 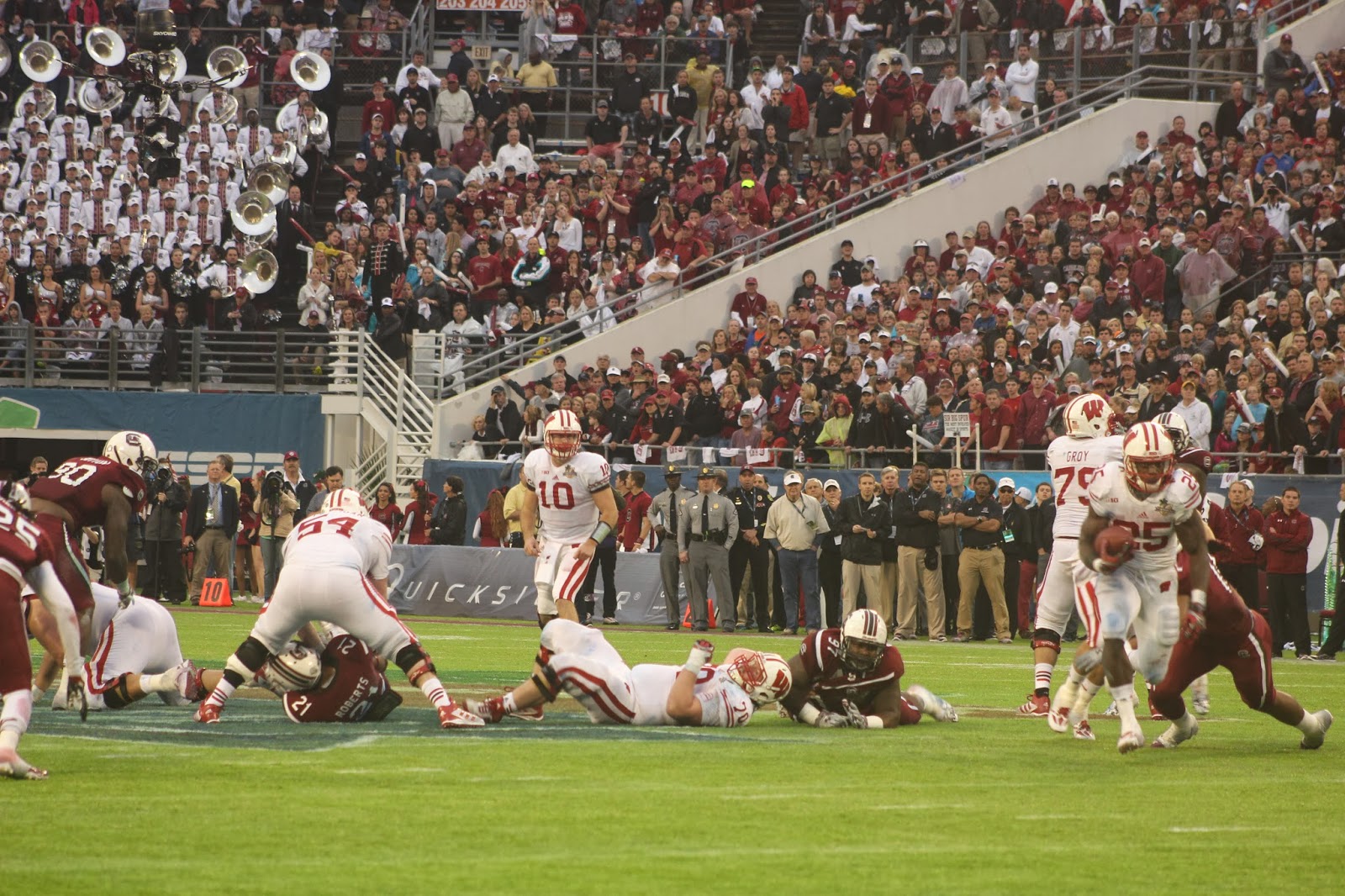 Gordon (photographed, wearing No.25) and White are the first teammates in FBS History to rush for at least 1,400 in the same season.

It will be interesting to see how many pros emerge when South Carolina and Wisconsin hold their Pro Days during the spring. I'll be curious to see how many players get invited to the NFL Scouting Combine as well as the upcoming College All-Star Games including this weekends Senior Bowl.

But Spurrier's 300th game turned out to be a winner as he's won three straight bowl games against Major Big Ten Teams. He's now 77-39 at South Carolina and 219-79-2, plus three straight 11 win seasons.

South Carolina finished No.4 in both The AP Top 25 and USA Today Polls.

When the contest was over, Spurrier was relieved that Wisconsin's two-headed running back monster tandem didn't lead the Badgers to a victory. 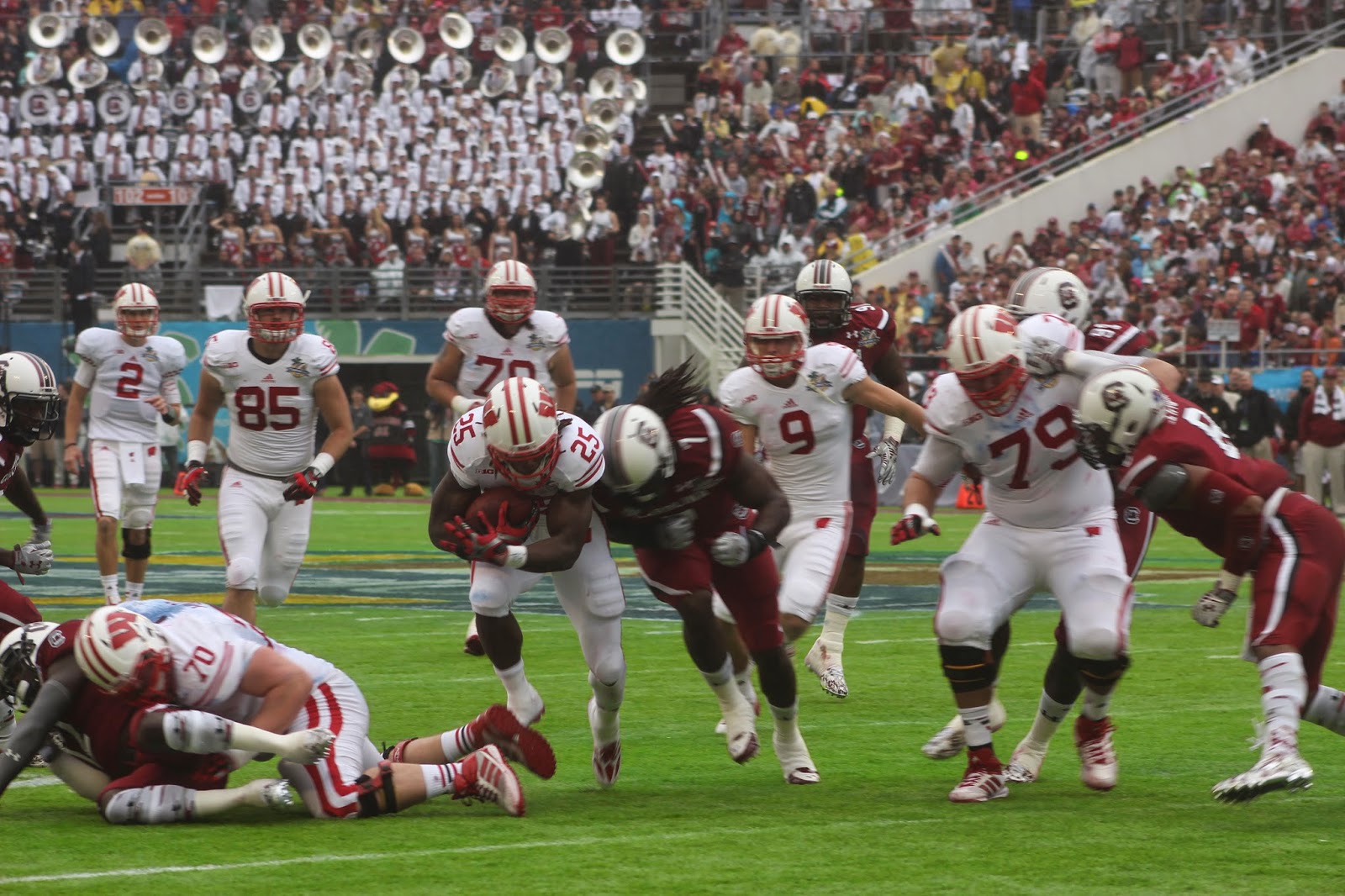 "I'm glad that the team that rushed the most yards didn't win today," Spurrier said. "I didn't realize that they had that many, but I knew they had a lot of big runs. Even though we gave up a lot of rushing yards in the middle of the field, our guys were pretty tough down there, and they made some key third downs which enabled those drives in the first half to keep going.

"Scoring is the big defensive stat, as we all know. We held them to 17 points, kickoff return on one. A good day for our defense, even though Wisconsin is a good running team as we know."

Spurrier added that he was proud of what Shaw's accomplished in his career.

"Connor will play a lot more football. I'm sure the NFL guys were watching today," Spurrier said. "They're looking for quarterbacks that can avoid the rush, move around a little bit and throw. And Connor can do all of that. So I think he's got an excellent chance."

Spurrier said that Shaw without question is one of the best signal callers that he's ever coached. 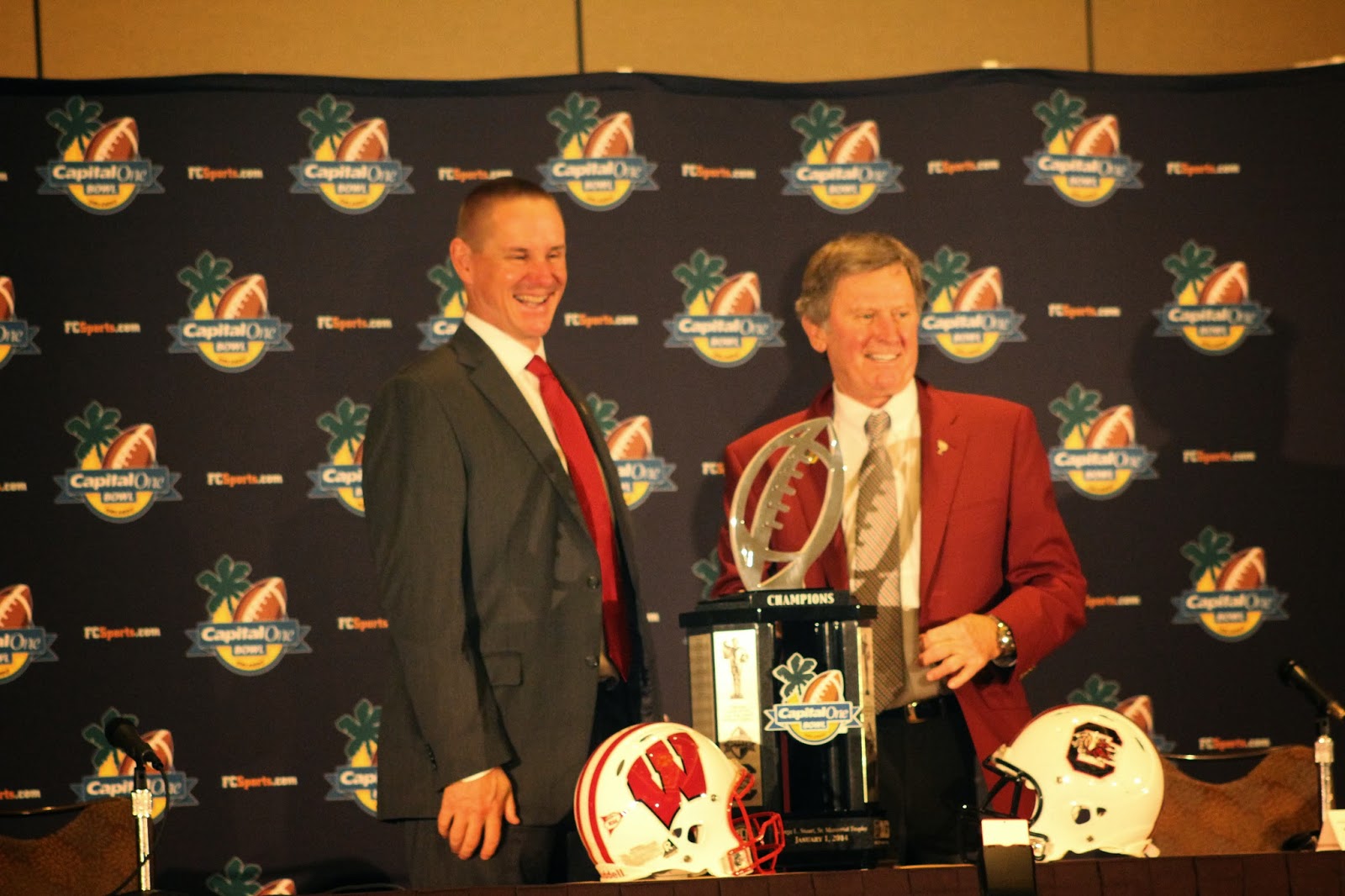 "I've had a lot of good ones," he said. 'Connor can take care of the ball and make plays when the game is on the line. And the game was on the line a whole bunch of plays today."

Badgers Coach Gary Andersen said this was a tremendous bowl game and something that everybody will remember the rest of their lives. It had great memories but unfortunate that the Badgers didn't get a win.

He said there is one player that made a major difference in this contest and that was the Gamecocks quarterback.

"We knew coming in that he's the engine and he does a great job extending plays," Andersen said. "He doesn't necessarily look to scramble, but to make a throw and he hurt us on that and a couple times later in the game. He played well. We were kind of disappointed without being able to contain him better. I give him a lot of credit. He's a great player." 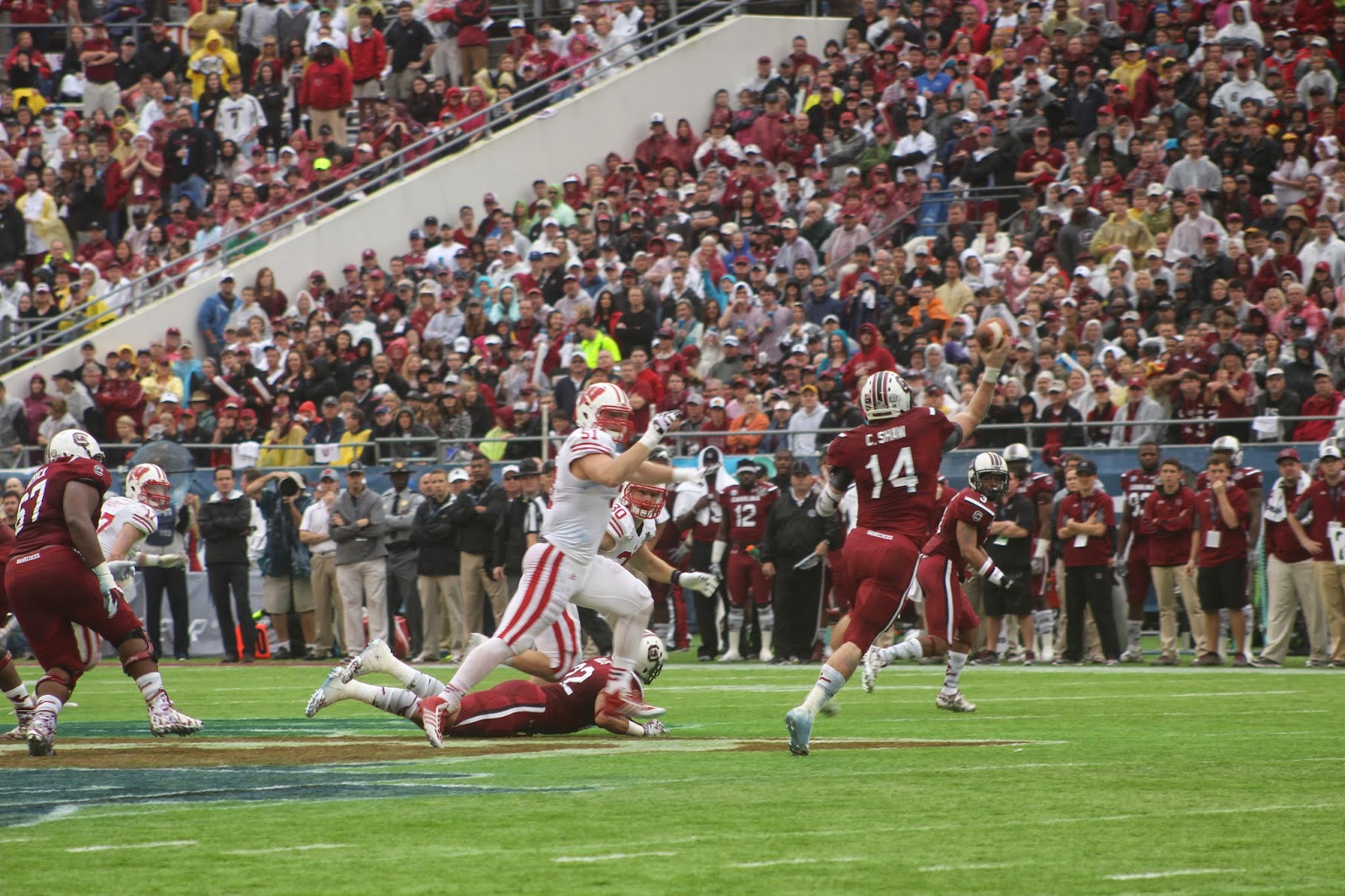 Shaw is listed at 6-1, 209 pounds. Whether he is a first round draft choice is anybody's guess.

But three non first rounders that come to mind that have played in Super Bowls in recent years include Tom Brady a sixth round pick by New England, Colin Kaepernick second, by San Francisco, and former Badger Russell Wilson, who has guided the Seattle Seahawks this year.

Going into the Capital One Bowl it looked like Clowney would be the main attraction to the scouts and Shaw would be on the undercard.

It will be interesting to see what draft order they'll go and which one will be a better pro.

But watch out for James White. It will be interesting to see what type of NFL career he has playing for a university known for producing running backs.

Although these three players stand out at the moment, there are the Hidden Gems in the middle, end of the draft as well as undrafted free agents that can make NFL scouts and player personnel staff  look like geniuses.

One player that we saw during the playoffs was LeGarrette Blount, who led the Patriots to the AFC Championship Game, but fell short to the Denver Broncos.

Blount started his career with the Tennessee Titans, moved on to the Tampa Bay Bucs, both of whom missed this years playoffs, before making New England his third stop.

If there is one reason I enjoy covering, college football, watching bowl games, it's looking for future NFL Players.

When you have a Big Ten vs Southeastern Conference match-up, on New Years Day, you're bound to find good players.