1. I was totally touched by the gesture that Jack Meredith, a 32-year old Buffalo Bills fan made when he had a tattoo placed on his right-arm of late Owner Ralph Wilson Jr.

Wilson, who died at the age of 95 in March, was an unbelievable person. I had the pleasure of meeting him during Super Bowl XLIII Week in Tampa when he was selected before the Pittsburgh Steelers defeated the Arizona Cardinals at Raymond James Stadium on February 1, 2009. 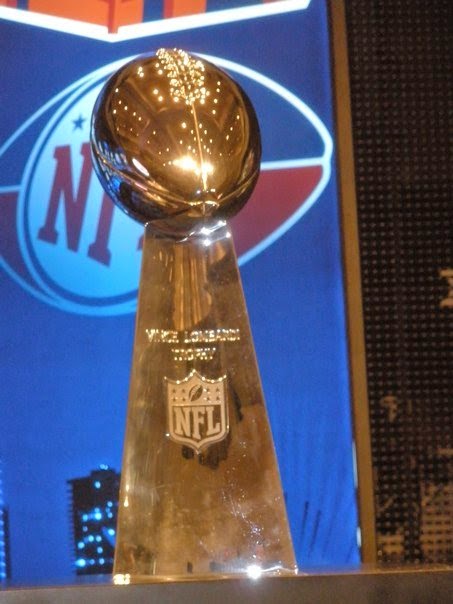 When I met Wilson, the only way that I could talk to him was by addressing him as Mr.Wilson. Rest In Peace, Mr. Wilson.

While I have no tattoos nor do I ever have plan to get one, I respect a person that pays tribute to great people with this form of symbolism especially to a pair of local icons.

2. More on the Bills. As much as I know that Donald Trump's involvement led to the downfall of the USFL in the mid 1980's thinking the league could compete against the NFL in the fall, I have to admit that when the team gets sold by the Wilson family, I hope he succeeds in his quest to buy it.

Trump has deep pockets and will turn the Buffalo Bills from a Small to a Big Market team in a New York second. This billionaire will add credibility to this organization and we know that he'll spend good money to get the best players. How many coaches he fires is another story, but he'll be able to land big names.

The only player he won't get will be Herschel Walker as his running back as he did with the New Jersey Generals. But you never know, he could hire him to work in the front office.

3. The best thing that ever happened to former Texas A&M QB Johnny Manziel was that he slid to No. 22 overall to the Cleveland Browns. I heard he even sent a text message to the Browns to take him and they traded up to the No.26 spot in the first round to do this.

Have to admit after hearing his recent sound bites, Manziel was humbled that he was passed up 21 times. He said he expects to earn his job and nothing will be handed to him.

This is called Humble Pie, but I have to admit that I'm actually rooting for him to do well. The City of Cleveland isn't a place that most athletes want to go. Even home town NBA legend LeBron James bolted for Miami.

But after Manziel's selection, the Browns sold 1,500 season tickets and will sell plenty more. Manziel dropped because of his off the field baggage as teams wondered if he would be dedicated to football instead of endorsements.

If he performs well in Cleveland, The Rock N' Roll Hall Of Fame will make him an Honorary Member.

Time will tell if Manziel ever turns out to be a late first round steal like Dan Marino (Miami Dolphins) or Aaron Rogers (Green Bay Packers). But if he performs to his abilities, works at his craft, then there will be 31 teams regretting that they passed on him.

Because of the hype, defensive players will be gunning for him and he'll have a Bulls Eye on his chest.

If the Browns win the Super Bowl, I predict that there will be two Manziel Statues, one on Lake Erie and the other in front of the stadium.

If he becomes a bust, there won't be a bust at the Pro Football Hall of Fame in nearby Canton, Ohio and the Browns management will be eating "Crow."

4. Not a good time to be an aging NFL Owner.

Aside from one trip to the NFC Championship Game, the closest Ford ever got to a Super Bowl was when Metro Detroit hosted games at the Pontiac Silverdome and Ford Field.

Say what you want about his lack of on field success, but I will say that in an era that if Owners didn't get stadiums built, they'd move their teams out of state, Ford never utilized this hostage tactic with the Lions.

Sixteen days after Ford's death, the Buffalo Bills lost their Owner Ralph Wilson on March 25, 2014. While Wilson didn't win a Super Bowl, under the direction of QB Kelly, they appeared in four straight championship games.

There is a saying that deaths can happen in threes and that indeed is the case with the passing of Tampa Bay Bucs Owner Malcolm Glazer on May 28, 2014 at the age of 85.

Prior to his ownership, Tampa Bay had won only 87 games in 19 seasons with three playoff appearances under the late Hugh Culverhouse.

5. I'm still waiting to see what team will move to Los Angeles. Will it be the Oakland Raiders, San Diego Chargers or the St. Louis Rams? All of these stadium issues have expiring leases and the teams seem to be getting very little cooperation from their respective communities. I wouldn't even begin to make a prediction, but how does the LA Rams sound? That could happen again and makes a lot of sense since their owner his Southern California ties.

6. While it will be weird not seeing an AFC team on Thanksgiving, the NFL did get it right as CBS took advantage of it's cross-flex option. The South Florida Market, Miami Dolphins, or the return of former Lions Coach Jim Schwartz of the Buffalo Bills weren't good enough story lines.

The Detroit Lions face the Chicago Bears for the first time on the holiday since 1989 at 12:30 p.m..

It will seem like old times with these rivals on CBS when the network used to own the NFC Broadcast Rights.

This brings back memories of the late Pat Summerall and John Madden tandem.

No Brent Musberger, Irv Cross, Phyllis George or Jimmy "The Greek" Snyder on the NFL Today.

The other match-ups aren't bad with the Dallas Cowboys hosting the Chip Kelly led high octane offense of the Philadelphia Eagles on Fox at 4:30 p.m.

NBC gets to show the San Francisco 49'ers new home as they face the Super Bowl Champions Seattle Seahawks at 8:30 p.m.

While all three games should be entertaining, CBS makes out like a bandit getting an old traditional NFC North Rival. They can only hope the Lions under new Coach Jim Caldwell gives them a good offensive show along with additional improvement by QB Matthew Stafford.