No Repeat Of History at Marlins Park

The last time we came to the Orange Bowl Location, history was made.

Henderson Alverez threw the 282nd No-Hitter in MLB History and the fifth since the Marlins were formed in 1993. 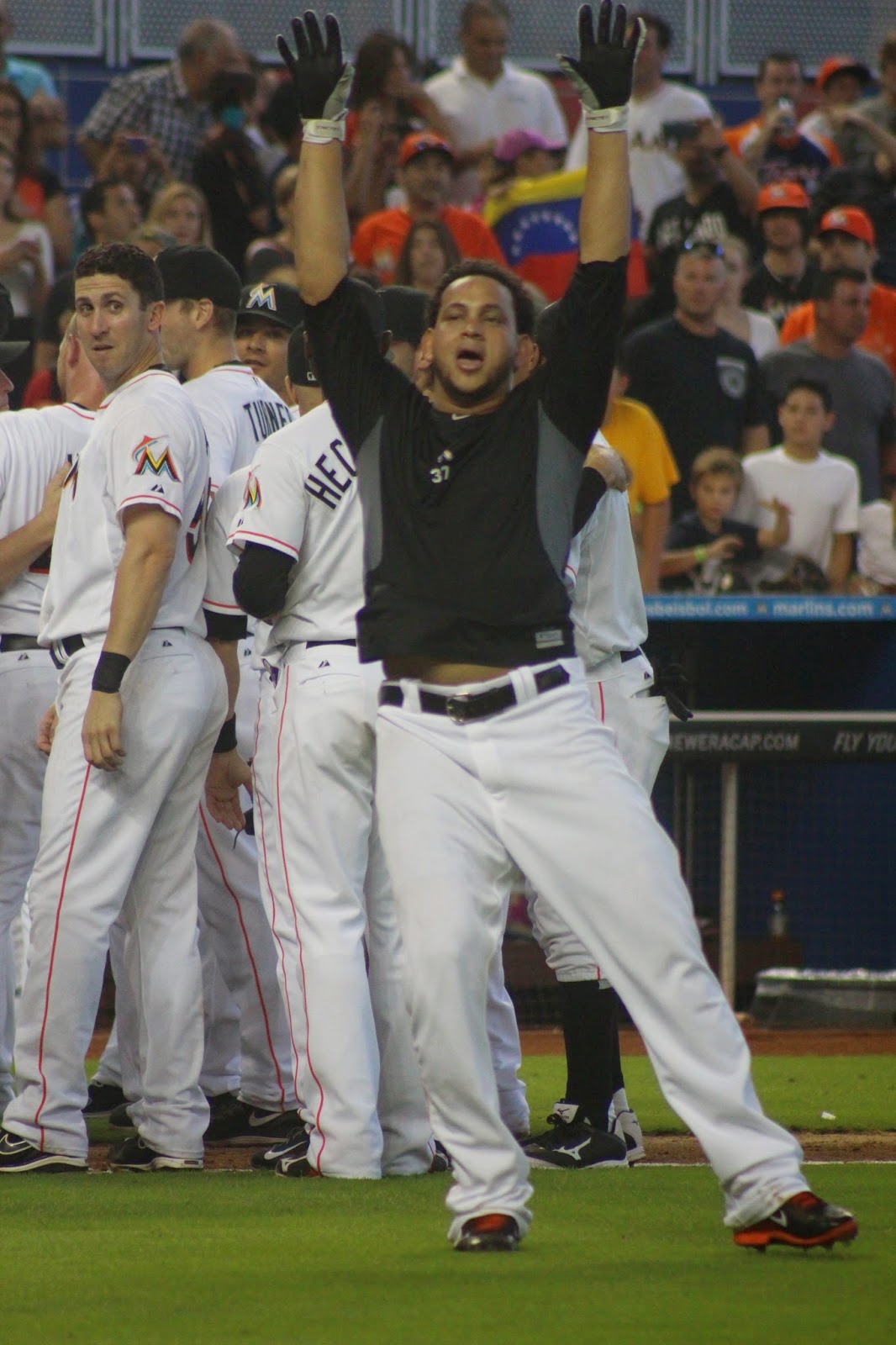 This was the first no-hitter that I've ever seen in person.

Miami swept the Detroit Tigers in this three-game series from Sept 27-29 culminating with the season ending finale by Henderson Alverez, photographed celebrating.

Miami would finish the season with a 62-100 record and were 34 games behind first place Atlanta (96-66) in the National League East.

Miami's payroll for this dismal season was $36 Million which was 29th in MLB. This averaged to $1.1 Million per-player.

As I researched this statistic, it was interesting to note that the Detroit Tigers have connections to three of these no-hitters.

To win on the road in windy San Francisco should count as two no-hitters.

Leyland was once again a part of a no-hitter, but on the wrong end of it as Alverez defeated Detroit 1-0 on September 29, 2014 at Marlins Park in his last regular season game as Tigers skipper.

Here on May 24, 2014, another former Tiger was on the hill for Miami against the Milwaukee Brewers. 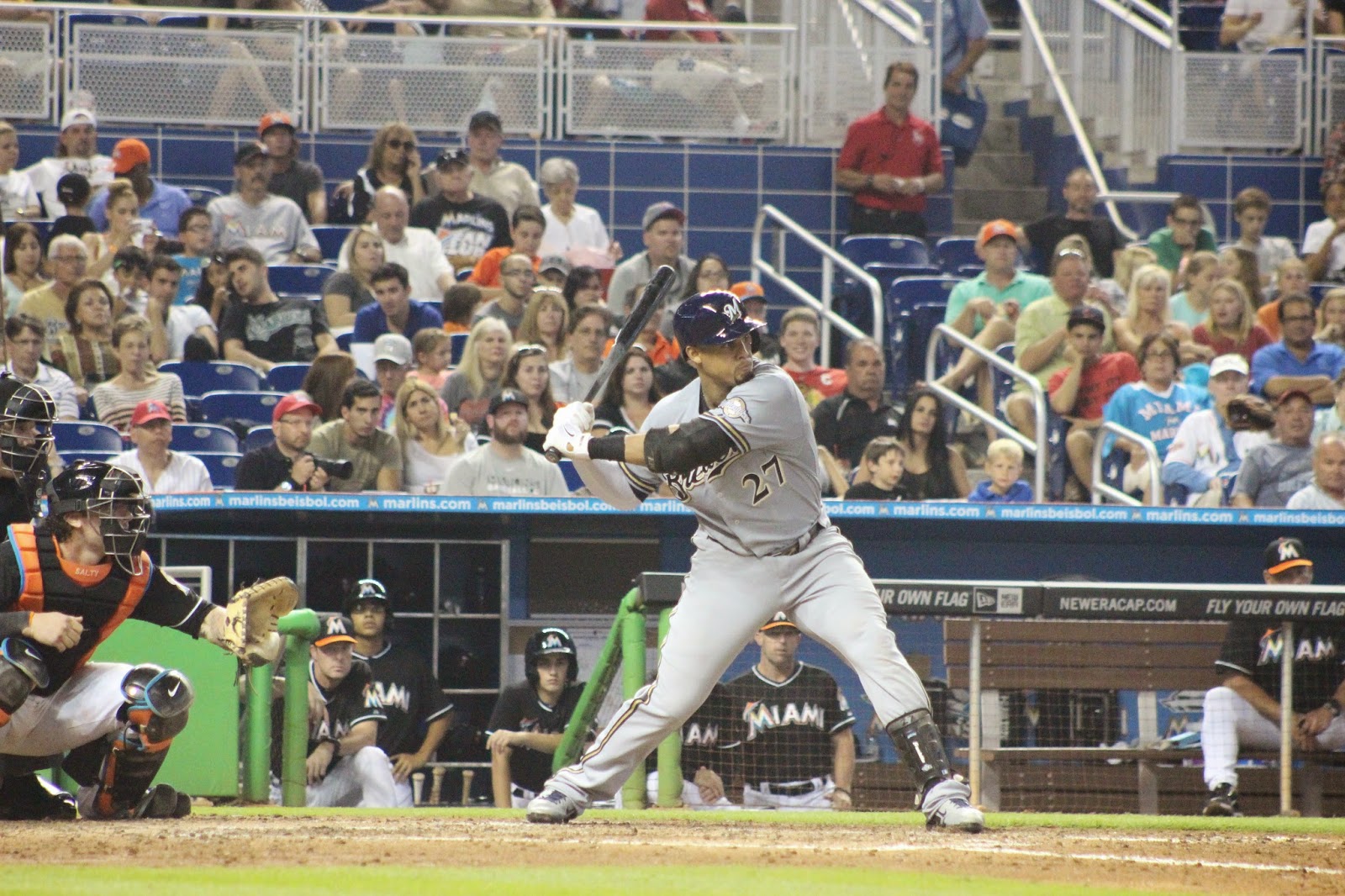 His no hitter ended in the top of the second inning as Carlos Gomez, photographed twice, doubled to deep right field.

Turner pitched 6.1 innings, gave up eight hits, walked one and struck out two. 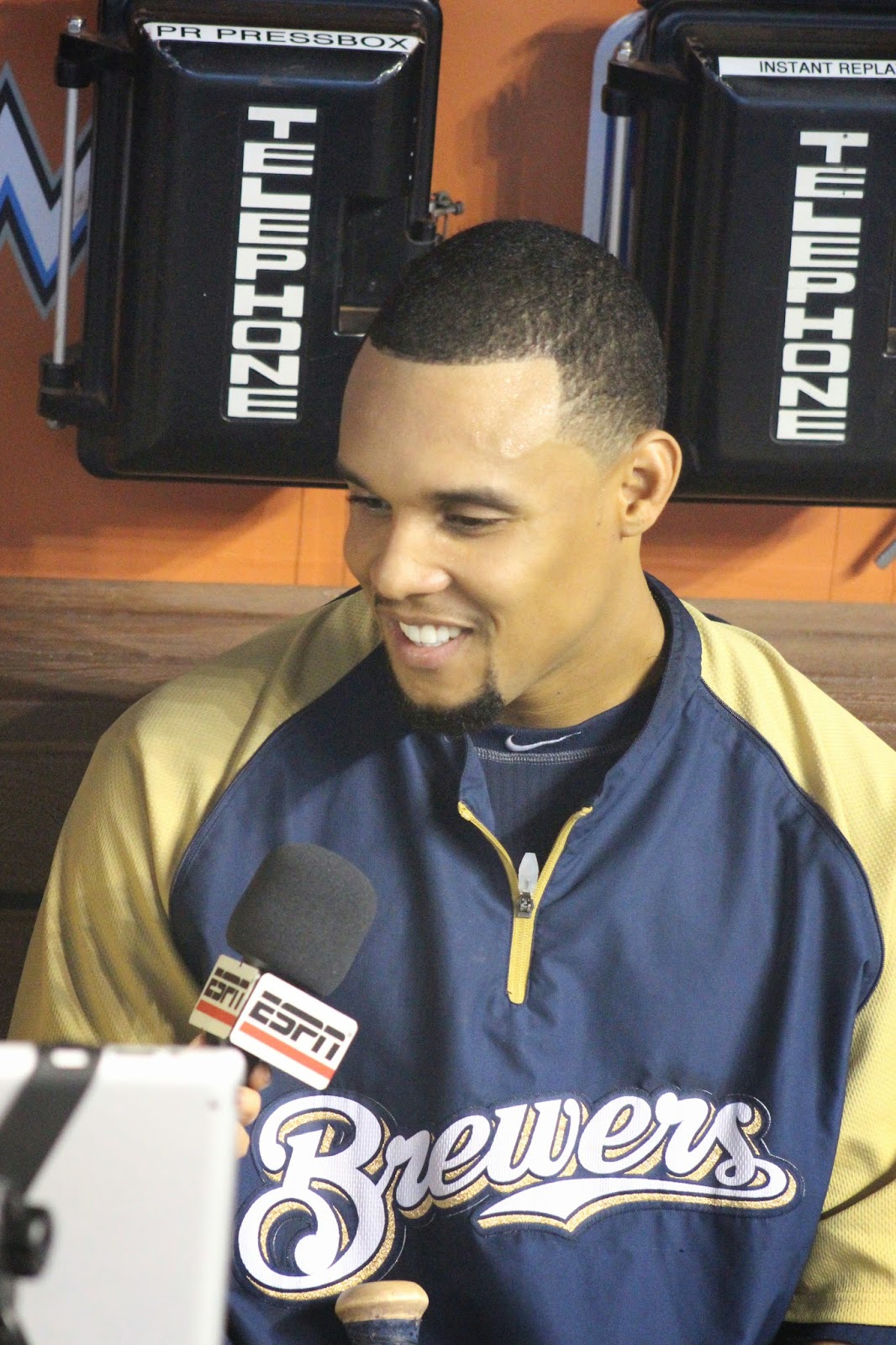 Turner would go on and get the win and improved his record to 1-2.

On Friday Night, the Marlins began their Memorial Day Weekend three-game series and with Miami deciding to leave the retractable roof open.

Giancarlo Stanton and Garrett Jones put on a power display by each hitting two homers, all were solo shots but that wasn't enough as Milwaukee pounded Miami 9-5. The paid attendance was 18,989.

Going into Saturday's game, Milwaukee battered the Marlins 20-6 in their last 26 meetings and had a five-game winning streak.

In 2013, Milwaukee was 5-1 against Miami and shutout the Marlins three straight games from July 19-21 in Wisconsin.

The Marlins game on Saturday would be a 4:10 p.m. start by no means a conflict with the Miami Heat vs Indiana Pacers just a handful of miles downtown that would begin at 8:30 p.m. at the American Airlines Arena.

There would definitely be no parking issues for this inner city double-header.

There would be No Repeat of what would happen in September. With the temperature 87 degrees on the outside, the only air was the air conditioning.

The Marlins (26-24) defeated the Milwaukee Brewers 2-1. The paid attendance was 25,819. The Brewers dropped to 29-21. Miami snapped it's five-game losing streak to Milwaukee.

Milwaukee still leads the all-time series with the Marlins 60-57, but is 29-34 in South Florida.

On Sunday, Milwaukee ripped Miami 7-1 to improve the all-time series against the Marlins 61-57, and 30-34 in South Florida.

Ryan Braun led the way in this contest by amassing four hits, scoring two runs with one RBI, in front of a paid attendance of 21,897.

The three game series drew a total paid attendance of 66,705 which Milwaukee took two of three.

The only difference between the last time these teams met in South Florida was both were struggling squads.

In 2013, Milwaukee finished 74-88 and dealt with the 65-game suspension of star player Ryan Braun which originated in Miami 7.13 miles and 15 minutes away at the Biogenesis Clinic of America. 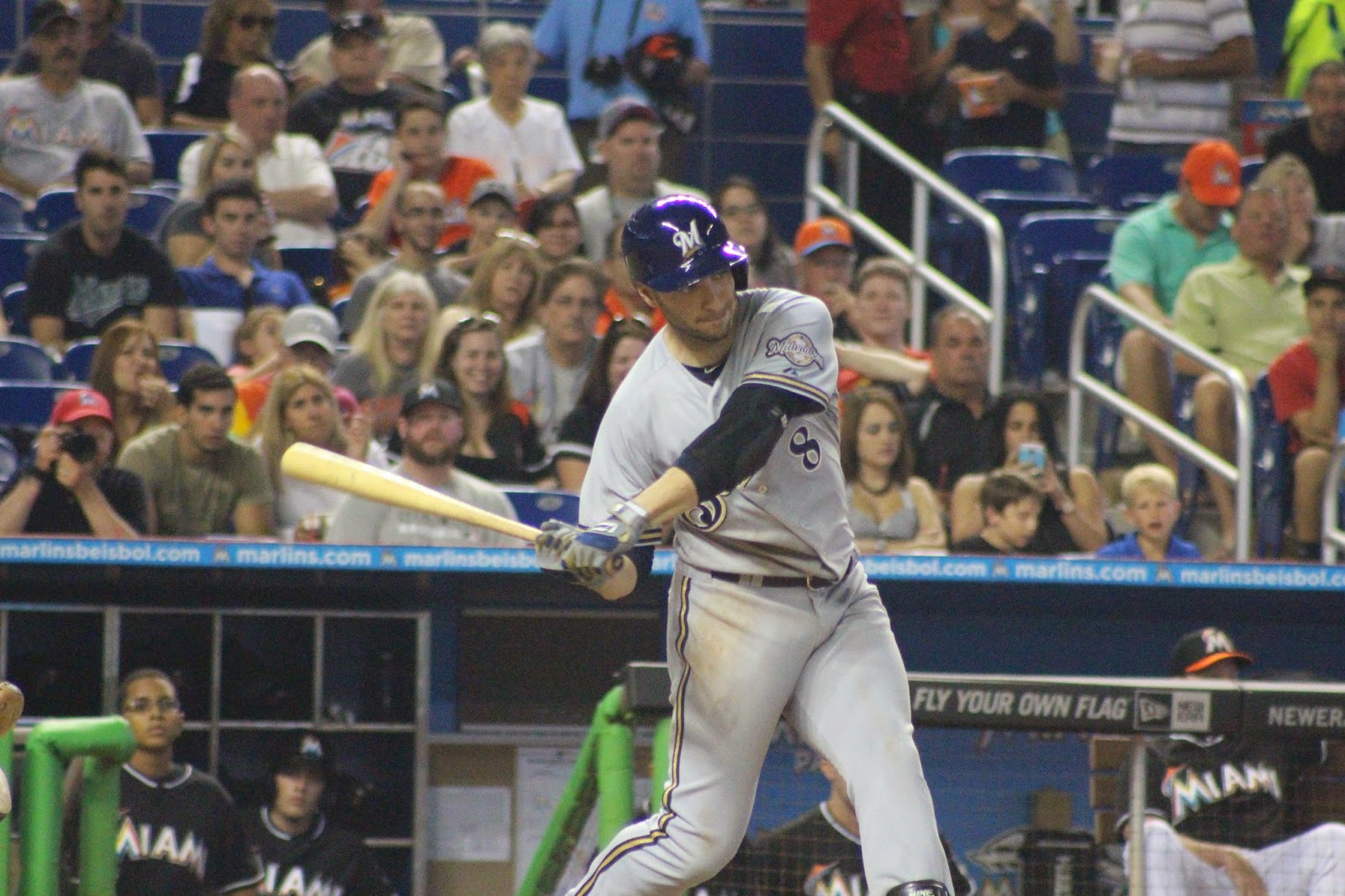 He missed a total 86 games, 21 due to a right thumb contusion.

In 2014, Braun, photographed, has quietly put some respectable numbers on the board with a .315 average, seven homers and 23 RBI in 36 games.

In 2014, Milwaukee is currently in first place in the National League Central with a 32-22 record while Miami is close to halfway towards it's win total of 2013 with 28.

The Marlins are 28-25 and they've slightly raised their payroll to 47.5 Million which is still 29th in MLB.

Before the game, I had a chance to speak with Hall of Famer Tony Perez, photographed with me to the left, while former Tigers Pitching Coach Chuck Hernandez holds the same title for Miami.

The former Cincinnati Red legend, Perez looks fantastic at the age of 72 and is a part of the Marlins front office. 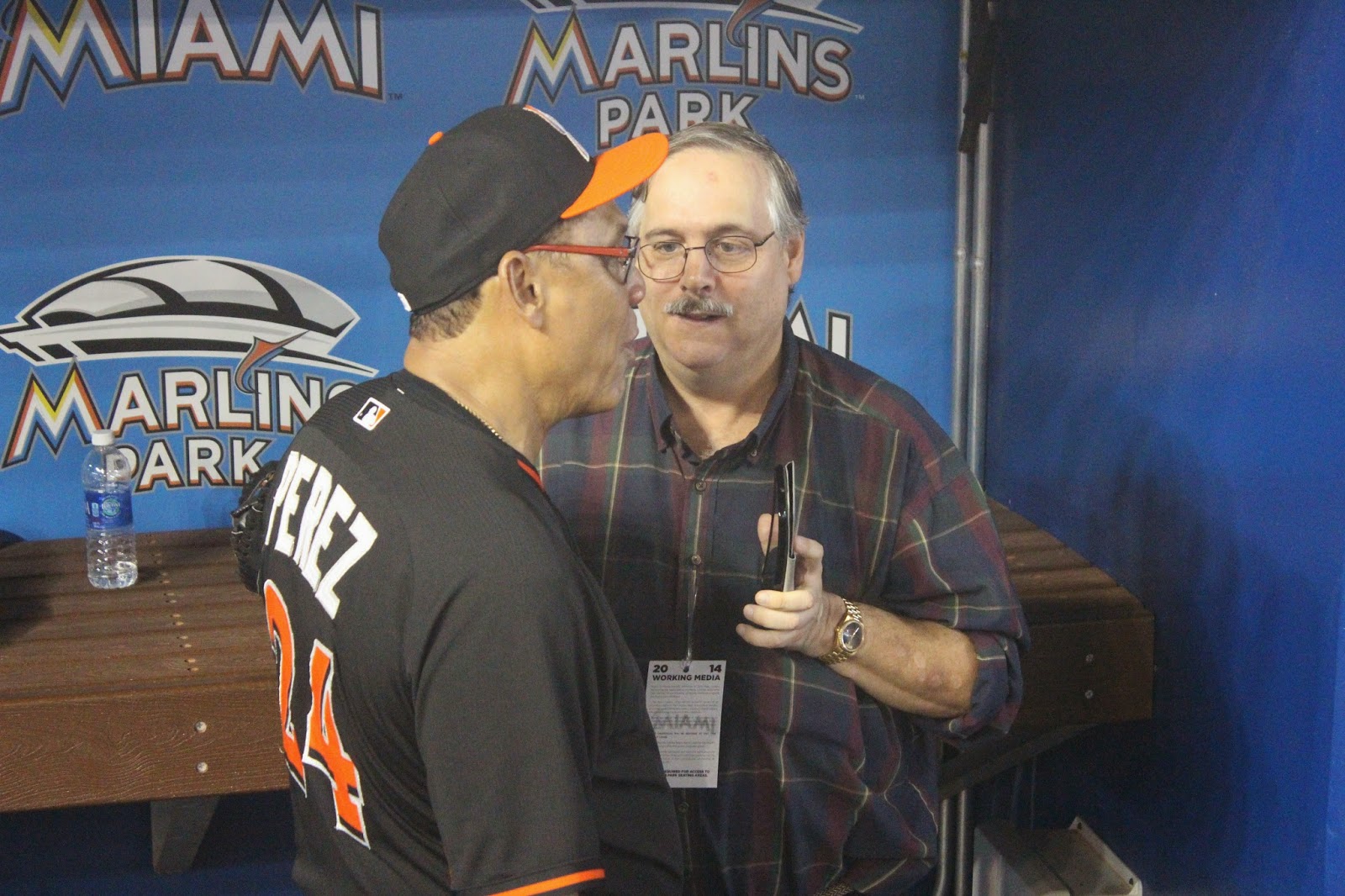 This is a young staff that has an ERA of 3.78 and is in contention in the National League East .5 games behind division leading Atlanta 29-25 at the time of this post.

It will be interesting how this young squad progresses and whether the fans fill Marlins Park.

There is still a lot of backlash aimed at Miami Owner Jeffrey Loria who has a new expensive stadium, but has yet to field a competitive team.