Back To The Future

The first time I saw the movie "Back To The Future" was back in the 1980's when my long-time colleague George Eichorn and I watched it in a cinema in Southfield, MI.

When I made the decision to cover the Detroit Lions vs Jacksonville Jaguars on Friday August 28th, I was curious about who was playing the following night in Florida State League (FSL) action, Advanced Class A Professional Baseball in Daytona Beach.

As it turned out, the Daytona Tortugas were hosting the Tampa Yankees at Jackie Robinson Ballpark. 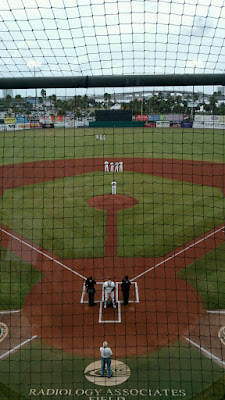 This game brought back some fond memories from my past.

The Tortugas are the Advanced Class A Affiliate of the Cincinnati Reds.

Meanwhile, the Tampa Yankees are the Advanced Class A Affiliate of the New York Yankees.

What made this real special for me is I was a beat writer for both organizations from 1982-86. There were a lot of great memories at Fort Lauderdale Stadium and Al Lopez Field. I worked with the Yankees from 1982-84, then with the Reds from 1985-1986.

It was a pleasure working with future major league players, coaches, managers and trainers.

My best memory of Merrill, though it didn't feel that way at the time, was when my tape recorder stopped working during a 40 minute interview.

Thanks to My Photographer Ken Rotberg, who used his tape recorder to track players, I used his recorder, and Merrill was nice enough to do the interview all over again.

He said to me, "I'm here to develop young players. I'm glad that I can help a young reporter." He patted me on the back and said, "Hang in there Scott, you're doing fine and I appreciate you promoting the team. I enjoy working with you and please keep it up."

I got to know the Fort Lauderdale Yankees really well and the most notable prank they played on me was letting me wear one of their hats, only for it to be filled with shaving cream. I was stunned to say the least. 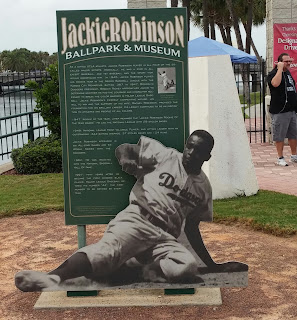 During the season, I had an unforgettable interview with late Yankees Owner George Steinbrenner. He was very cooperative, but if you asked a certain question about his managerial revolving door, he'd abruptly end the interview. Early in the conversation, we talked about some interesting topics, then I saved the managers question for last, which saw the interview come to an end.

I don't feel bad about this because weeks later, Ted Koppel of ABC News Nightline, did the same thing and Steinbrenner ended the interview quickly on National TV.

All in all, I learned a lot from the Steinbrenner experience.

Rijo, ironically played for both the New York Yankees and Cincinnati Reds. He won a World Series in 1990 for the Reds and was a key contributor on that squad.

During the 1982 season, Hudler went on to rip Steinbrenner in the Fort Lauderdale News/Sun Sentinel about his ways of handling the Yankees farm system while The Boss was in town. Hudler went on to have a solid carer in the major leagues. There were many players in this group that made it to the majors.

I'll never forget Pete Dalena, who played for the 1983 team.

My Hallandale Digest Editor Dan Bluesten didn't think Dalena could make the majors by being a DH. I asked Merrill about this and he said that Dalena would go as far as his bat would take him.

Two days after I wrote the Dalena article, he was promoted to Class AA Nashville, then eventually played for the Cleveland Indians in 1989.

There were many instances Bluesten questioned my gut feelings on story ideas and he was proven wrong several times.

It didn't hurt that My Mentor Tony DeMarco always taught me to trust my instincts. Whether DeMarco ever gets into the writers wing of the Baseball Hall of Fame remains to be seen, but he's in My Hall of Fame as a Mentor and a Friend.

Merrill would eventually manage the Yankees in the Major Leagues and Steinbrenner always found a role for him in the organization.

Players such as Brian Butterfield and Chuck Hernandez have been coaches in the major leagues. Hernandez, a former Yankees left-hander had one of the best moves to first base that I've ever seen.

Hernandez, who was a pitching coach under former Tigers Manager Jim Leyland, told me during an interview in Lakeland, FL., that he had to have a good move because he had troubles getting hitters out, and had no difficulty joking about it.

Merrill went on to win two titles with the Fort Lauderdale Yankees in three years while I was covering the team. One of these titles was against the Tampa Reds.

It was an incredible three-year run covering the New York Yankees in Spring Training as well as the FSL Yankees.

Two of the nicest people I worked with in the Press Box were Doug and his wife Dee Pett. Doug was the PA Announcer and Official Scorekeeper while Dee assisted him. They are both former Metro Detroiters.

When the Miami Marlins came up I-95 to Fort Lauderale, two incredible people that became friends were executives and media personalities, Larry Bluestein and the late Sonny Hirsch.

The Manager of the Tarpons was Marc Bombard. He's worked with the Reds when I was in Tampa and has moved to other organizations.

During my tenure with the Tarpons, his two teams were real competitive.

In 1986, he guided the Tarpons to the FSL Playoffs. I joked with Bombard that we were rivals and now we're teammates.

He laughed when I told him you need to win a championship while I'm here. He said, "We'll try Scotty," smiling.

We had a good two-year run and the two players who stood out were left-hander Chris Hammond and Catcher Joe Oliver. 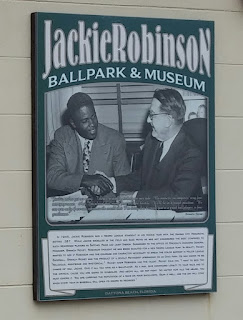 The thing that Hammond will best be remembered for was when I wanted to interview him, he turned me down. He said that he doesn't talk to the media. I told him "OK and I hope you're as good as Phillies legend Steve Carlton. You're Just a Minor Leaguer that is Just a Prospect with no guarantees to make it to the Major Leagues, who could use the publicity to promote yourself."

Hammond was a member of the 1990 Cincinnati Reds Championship team, but wasn't on the post-season roster because Manager Lou Piniella lacked confidence in him.

His ride to the majors was attributed to the fact that he was a left-handed pitcher. Left-handers are always in demand and Ray Fontenot took the Southpaw route to get to the majors.

As for Hammond, he was a mediocre pitcher, who had a 66-62 record with a 4.14 ERA. He was a journeyman pitcher that played for seven teams.

One of the nicest players I ever worked with was Tarpons 1985 Catcher Joe Oliver. He had a .269 average in 112 games, with seven home runs and 62 RBI.

Oliver would play for the Reds from 1989-1994 and was also a member of the 1990 World Series Championship Team. He would play two stints with the Reds.

In case you were wondering, I never fell for any shaving cream pranks with the Tarpons. I got just a little smarter to let it happen again.

To this day, Joe and I remain good friends. He lives in Orlando, FL.

My employer the Tampa Tribune gave me lots of flexibility with the Tarpons.

My Executive Sports Editor Joe DiSalvo was great to work with. Joe allowed me to also free-lance write for RedsVue Magazine in Cincinnati. He allowed me to use their computer system to send stories, plus allow his Editor Rick Nelson to proof read them before I sent them.

One of my fondest memories of Nelson is when I covered the FSL All-Star Game in Osceola, FL in 1986. This was a new stadium for the Houston Astros.

The Tribune allowed me to use a company computer. I typed my story into it but the phone lines wouldn't allow me to send it after four attempts.

Nelson would get me a 25 minute extension, and I dictated two stories to Rick and made it with two minutes to spare. Rick did an excellent job typing the story which was approximately 25-30 inches under extreme pressure. We would joke around about this the following week, but it wasn't fun at the time.

The stories look real good when I saw them in the paper. This pressure situation was good for me.

RedsVue Editor Mark Schmetzer was also a great guy to work with. In addition to the Tarpons, he utilized me during Spring Training as well as Fantasy Camps.

Schmetzer got me credentialed for a three-game series at Riverfront Stadium against the LA Dodgers.

Former Tarpons Official Scorekeeper Bill Campbell and his wife Cathy were tremendous folks to work with.

So now "We're Back To The Future" in 2015 at a very Historical Ballpark. 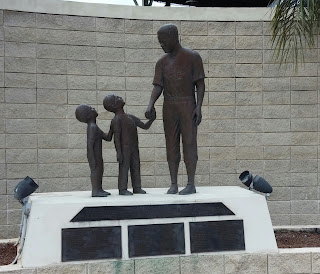 I saw one familiar face for Daytona Beach. He was a USF Alumnus and also worked for a year as a pitching coach for FAU when I worked with the Owls. His name is Tony Fassas. I will be writing on him at a later date.

But Jackie Robinson Ballpark is a must see if you're a baseball junkie. It has a Museum throughout the park with a lot of commemorative photos, plaques and a Statue Outside.

This is a real neat place.

I was impressed by the way the Daytona Beach Community has embraced this team.

The fans were also great to us. It was just as fun before the game as it was during the contest just taking pictures with Jackie Robinson's historical breakthroughs which changed MLB forever. 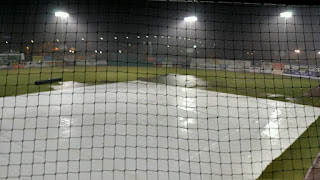 As for the game, it was 0-0 and Rained Out after four innings.

But that didn't matter to me. The score meant absolutely nothing!

Seeing the history about Jackie Robinson was fantastic.

More importantly, the two organizations that were facing each other meant everything.

I met so many great people during my five years covering both that I can proudly say I was covering these people at the beginning of their careers.

The Hallandale Digest and Tampa Tribune were my employers throughout college.

Not only did I enjoy working in baseball, but I was getting paid to do it.

It doesn't get any better than that.

This night was a collection of a memorable past that brought me "Back To The Future" even though I'm not Michael J Fox.

Scott Morganroth can be reached at www.scottsports33.com and is a member of the Detroit Sports Broadcasters Association.
- September 03, 2015