The One That Got Away "DJ LeMahieu" Colorado Rockies

Everybody knows that The Motor City is known for producing automobiles.

But every now and then Southeastern Michigan produces some good ballplayers. 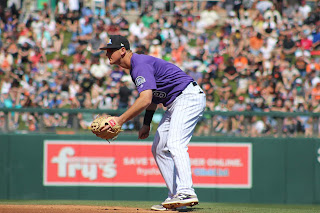 Former Milwaukee Brewers Catcher Ted Simmons led his team to a World Series appearance in 1982, only to come up short against the St. Louis Cardinals.

During his MLB career, Gibson slammed two memorable post-season home runs leading the Detroit Tigers and Los Angeles Dodgers to respective World Series Titles in 1984 and 1988. These were the last championships for both teams.

Since this is the non-waiver trade deadline day, there is no way that I can forget about Warren, MI., native John Smoltz, who was drafted by the Detroit Tigers in the 22nd round of the 1985 draft, 574th selection overall.

In 1987, the 20-year old prospect was traded to the Atlanta Braves for 36-year old veteran Doyle Alexander. The Tigers won the AL East with Alexander on the hill, but by 1989, the hurler was out of baseball.

Meanwhile, Smoltz would go on to have a Hall of Fame career as he was 213-155 as a starter, then converted to a reliever and amassed 154 saves. He won a World Series for the Atlanta Braves in 1995 and was an eight-time All-Star.

When we covered Spring Training in Arizona in March, the first game on the agenda featured the Colorado Rockies against the Milwaukee Brewers at Phoenix's Maryvale Stadium on March 10.

I walked over to the Rockies Public Relations area to get a media guide and Cory Little politely handed me one. Little asked for my affiliation then mentioned to me that there would be two players who were worth writing about.

One was second baseman LeMahieu and the other is pitcher Chris Rusin. 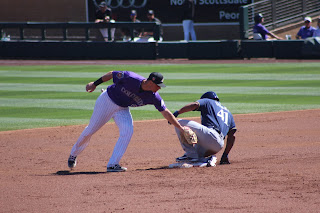 entialed us for the San Francisco Giants game on March 18 and March 20 against the Milwaukee Brewers, enabling me to interview both players.

Rusin's story will be written after this one, but both players are a big part of the Rockies post-season drive.

LeMahieu was a shortstop and pitcher at Birmingham Brother Rice High School.

After his senior year at Brother Rice, he was selected by the Detroit Tigers in the 2007 MLB Draft in the 41st round.

He didn't sign with the Tigers so that he could attend college and play for the LSU Tigers.

During his time with LSU, he participated in the 2008 and 2009 College World Series.

In 2009, he led LSU to the NCAA Championship and was named to the 2009 College World Series All-Tournament Team.

During his sophomore season with LSU, LeMahieu started 72 of 73 games. He led the team in batting average .350 and hits with 96.

LeMahieu was selected by the Chicago Cubs in the second round of the 2009, First-Year Player Draft.

The 6-4, 220 pound 29-year-old native of Visalia, CA changed organizations again as Colorado acquired him from the Cubs with outfielder Tyler Colvin in exchange for infielder Ian Stewart and right-hander Casey Weathers, December 8, 2011.

He became the eighth player in Rockies history (10th time) to win the NL batting title. 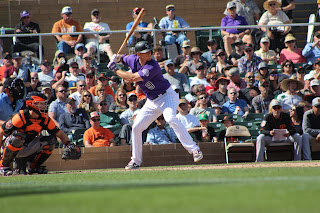 You talk about a stud, the former two-time winner of the Michigan Gatorade Player of the Year and Bloomfield Hills resident is one.

As things stand now, LeMahieu will be a free agent at the end of the season.

Meanwhile, the Rockies own a 57-48 record and are one game back in the NL West behind the LA Dodgers. Colorado is just a half game out in the Wild Card race as well.

To say that he's one Metro Detroit prospect that got away is mildly understating the obvious.

Nevertheless, LeMahieu  and I had an excellent conversation about his career.

Q: What have things been like in your journey in MLB thus far?

A: I'm very blessed to be where I'm at. I've put in a lot of hard work. I've been through a lot of adversity. There continues to be adversity and I'm just trying to get better everyday.

Q: What was it like playing for the LSU Tigers?

A: It was really cool and won a National Championship and got to Omaha (Nebraska) twice. It was an amazing atmosphere playing in front of 10,000 every night. The SEC is great and I couldn't have had a better experience down there.

Q: As I was looking at your biography at Brother Rice High School, I found it astonishing looking at your statistics as a lead-off hitter. How could you be that successful in that spot in the batting order?

A: I had great coaches at Brother Rice. From a freshman on, they wanted their best hitters at the top of the order. It wasn't lets get a couple speed guys at the top. We really had a good line-up so I was just trying to get on base, have at bats and let the rest of our line-up do their thing.

In high school too, they don't care as much about numbers as much as they do now. I was just trying to prove that I was one of the better players in the state, worth the hype, and the best player I could be. Then, you look back and the numbers were pretty good. 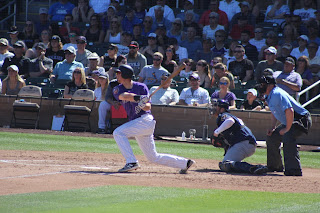 Q: I don't want to go back on something that wasn't cool, but don't you think the Detroit Tigers probably disrespected you a little bit based on the way things turned out particularly since they're in a rebuilding process? Plus, they've also had issues at the top of the batting order.

A: I don't look at it that way. They're a great franchise and have been great a lot of years. I saw them when they were one of the worst teams in the league to being one of the best in the league. It was a lot of fun to watch that growth.

Now they're going on some rebuilding but I got no doubt that they'll be back on top. When the Tigers are good, it's a fun town to be in that's for sure.

Q: Did you ever have a dream to play for the Detroit Tigers?

Q: Let's talk about your career with the Colorado Rockies. You play in the Rocky Mountains, the altitude is high, what's it like to be playing in that part of the country?

A: It's a great city, great town, they love the Rockies, great attendance and even when we weren't that good three or four years ago, people showed up at the park everyday. Now that we have some legitimate talent, and a really good team, it's really a fun team to be a part of.

Q: What's it like to play in that high altitude on a regular basis? I know that balls pop out of there a lot and it's a hitters ballpark. Is that an ideally suited situation for you?

A: There is no doubt that it's a really good place to hit, a good place to play and it is what it is. If it were a pitchers park, hopefully, I would like it as much. I don't look at the park as an advantage. I look at it as just something we deal with.

Q: I don't see many pitchers duels in that ballpark. Do you since you have a lot of high scoring games out there?

A: It's a hitters ballpark, there is no doubt, but both teams have to play in it and whatever the numbers are, we need to win games there.

Q: Describe to me what the strength of your game? 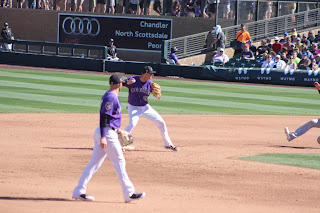 A: I play good defense, have good at bats, tough outs and try to get better everyday. I hit to contact, I don't like striking out at all, I just grind and try to put the ball in play.

What impressed me the most about DJ was his even-keeled attitude and his Blue Collar work ethic.

With the Detroit Tigers out of the playoff hunt, there is no way that anybody cannot root for a local kid and "The One That Got Away."

Scott Morganroth is a member of Detroit Sports Media and you can reach me on this website.
- July 31, 2018