During my 36 years of covering professional football, I've witnessed a lot of different things. 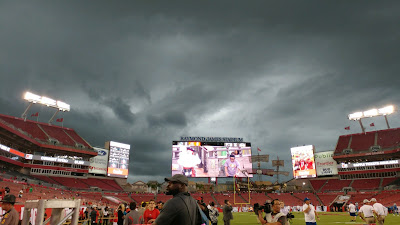 I've seen blistering cold weather, nice weather along with extremely hot and humid conditions, in addition to fields that felt like ice.

Unfortunately, I've watched careers end on old artificial turf which was a player hitting the concrete.

But on Friday, August 24, 2018, a Nationally Televised contest on CBS between the Detroit Lions at Tampa Bay Buccaneers in Raymond James Stadium was delayed until 9 pm due to rain and lightning.

I joked around with the Lions PR Staff that the area's reputation for being the Lightning Capital of  North America, is the reason why the NHL has a team called the Tampa Bay Lightning.

Of the pre-season games, it's no secret that the third game is the most important, as it's the dress rehearsal for the regulars to get as many reps as possible. 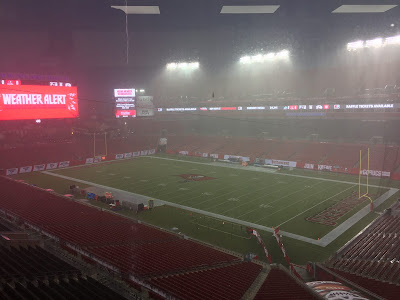 Despite these conditions, there is no way this game was going to be cancelled or postponed.

I couldn't see the Lions spending more money on travel expenses, the Bucs weren't giving back refunds and the NFL wasn't going to give CBS any rebates due to lost revenues.

Besides, with this being on a Friday Night, fewer people would miss work and there was no school for the kids.

Moreover, lets not lose sight of the fact that these teams needed the work so the only questions were how bad the field conditions would factor into the regulars playing time, in addition to the injury risks.

The last time I saw Lions running back LeGarrette Blount play in person was in 2010 when he played against Detroit on December 19, 2010.

Blount looked good in this game by amassing 15 carries for 110 yards with a 7.3 average and one touchdown. He would gain 1007 yards and six touchdowns during the campaign.

The Lions entered this game 0-2 under new coach Matt Patricia, who definitely needs to search for answers to get his squad ready for the season opener vs the New York Jets on Monday, September 10, 2018 at Ford Field.

How would the Lions fare on this wet night on CBS which used to televise these squads regularly as they were NFC Central Division rivals when the network used to carry the NFC Package? 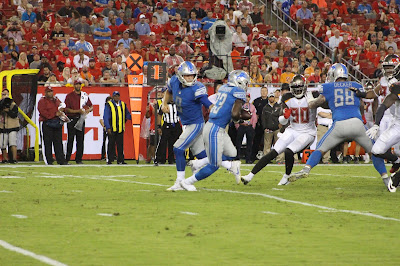 Lions QB Matt Stafford came away from the game without sustaining an injury. He completed nine of 18 passes for 113 yards, with zero touchdowns and zero interceptions. He was sacked three times.

I asked Stafford what it was like dealing with the weather conditions and how it was playing on the moist turf.

"It wasn't too big of an issue. Luckily it kind of passed over us pretty quick," Stafford said. "We were worried for a little bit that it might be a super long one. We were trying to find out how quickly we could get out there, but once we got out there really the weather was not an issue. We were able to pretty much play the game as normally as we would.

"As far as the turf, it felt okay. I think that field drains really well, I'm assuming that they've got a great drainage system considering they play in Florida."
.
Blount also left the game without any injuries. Against his old team, he rushed for 45 yards on 11 carries. 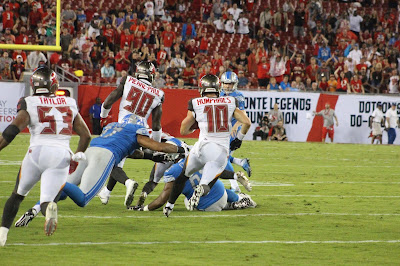 One play that stood out in the contest was kicker Matt Prater missed a 62-yard field goal. It was nine yards deep in the end zone which was a kick-six by Adam Humphries for what turned out to be a 109 yards which actually seemed longer considering the route crossing around the field.

This special teams play gave Tampa Bay a 27-6 lead. That's as high as this lead would get for Tampa Bay.

After the game, Patricia wasn't that bothered by this play.

"Obviously, it's going to be a situational game-by-game, depending on where we are and things like that, but it's a great learning point," Patricia said. It's a great situational point. It wasn't a very good play; it was pretty horrific, to be honest with you. 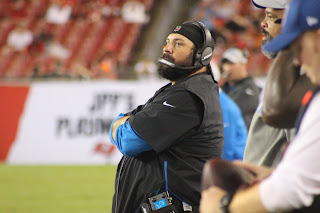 "There's a time and point where the play might have to come up and execute it properly, whether it's the kick or the cover or any part of it. To get an opportunity to get to do that during the pre-season, you take those chances and try to teach off of it. It's about teaching and improving."

On a positive note for the Lions, they didn't quit and realized the game was 60 minutes because they needed every bit of this time to make an improbable run which gave Detroit a 33-30 win.

In this game, Detroit amassed 122 rushing yards and totaled 337 yards of total offense.

Detroit scored 20 points in the fourth quarter and recorded a 21-point comeback.

While lightning began the night from a weather standpoint, there was more lightning that struck the Buccaneers.

The last time the Lions employed a player with the initials B.P., this player was one of the most dependable wide receivers during the 1990's named Brett Perriman.

Perriman stood 5-9, 180 pounds and played collegiately for the Miami Hurricanes.

Back in 1991, Perriman was on the last Lions squad to win a playoff game which also featured Barry Sanders, and Herman Moore. 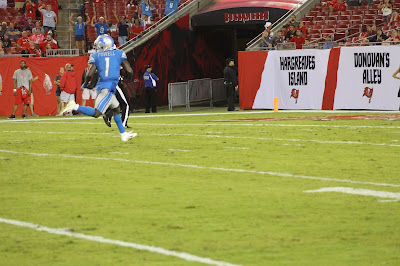 During the off-season, the Lions appear to have found a hidden gem as an undrafted free agent from the State of Florida.

But this kid played for the Florida Gators and is from my neck of the woods, playing high school football at Deerfield Beach High School.

But his performance on special teams stood out as he had three punt returns for 101 yards, including an 80-yard TD with 4:53 remaining in the game which cut Tampa Bay's lead to 30-26 and gave Detroit a chance for a win.

The Lions would win the contest as QB Jake Rudock hit Marcus Lucas for a five-yard touchdown that gave Detroit a 33-30 lead with 30 seconds left.

But the story was Powell, who came back to his home state looking to solidify his spot on the 53-man roster on Saturday. 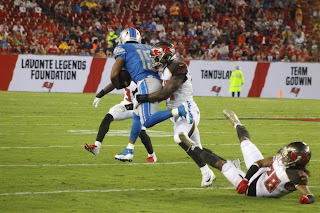 He was asked what occurred on the touchdown.

"Everybody on the punt return team-everybody was on their blocks, so I just had the easy part," Powell said. I just found the lane to run through. That's all I did. The other 10 guys were the ones that made it happen because they were the ones blocking for me."

Powell added, "Everyone just needed to go out there and do their jobs on that one play, that's all it was. The punt return team, everybody was out there trying to make the play. Everybody blocking, me trying to catch the ball and making something happen and we made a play."

Powell was also asked what it felt like when he knew he was going to score on the punt return?

As I left the Lions locker room, I bumped into Lions legend Lomas Brown, who is a Florida Gator alumnus and played for Detroit on those playoff teams in the 1990's.

He's the new voice on Detroit's radio broadcast team with FOX's Dan Miller. He was gleaming that fellow alumnus had a big night and told me he's cheering quite hard for Powell to make the final roster, as he gave me the Gator Chomp with a smile as wide as Florida to Hawaii. 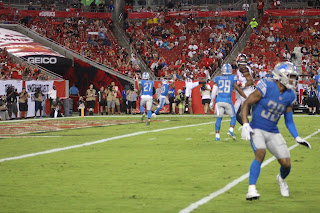 Meanwhile, the Lions did get Patricia his first win as Detroit improved to 1-2 during the pre-season in a game that lasted 2:57. The contest lasted close to 12 Midnight.

Like every coach in the pre-season which is experiencing what plays will work and searching for players that will contribute, it will be interesting to see what the ESPN National Audience will see on Monday Night Football when they face the New York Jets on September 10 at Ford Field with rookie QB Sam Darnold taking snaps for the opponent.

I'm also curious whether Patricia can surpass the 9-7 mark for a team that he inherited by former Coach Jim Caldwell.

But on this night, the Lions lightning theme worked out well as they overcame the elements and Powell jolted Tampa Bay.

Going into the pre-season home finale against the Cleveland Browns, Powell leads the NFL with 15 receptions.

Like in 2008, the Lions won an exciting game by three points and the only difference was each team scored 10 points more, in addition to the fact there would be no record long road losing steaks to deal with.

Scott Morganroth can be reached at scottbullm@aol.com and is a member of Detroit Sports Media.
- August 24, 2018