During our time covering Spring Training in the Cactus League, we had an extremely busy agenda and there were certain games along with people that were on the must do list. 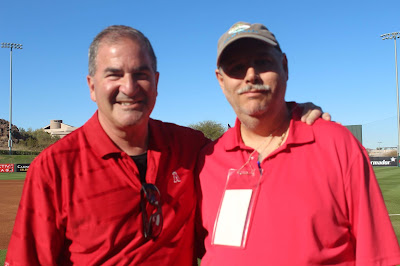 My top priority was seeing a very good friend that I've known for over 20 years.

His name is Tim Mead, the Vice President of Communications.

I'm thankful that throughout the years we've remained in touch through Linkedin and told him that when I returned to Arizona he should have a seat ready for me in the Press Box.

Tim kept his word and I had my seat in the Press Box.

When it comes to the Gold Standard of Public Relations individuals, Tim is one of the nicest and most genuine people on the planet!!

When I go to Arizona to cover Spring Training, this is a stop which is mandatory to make! 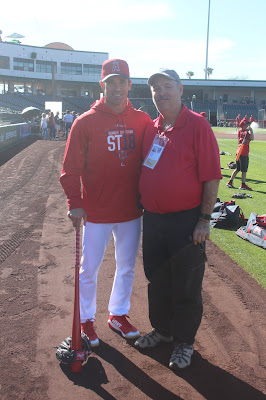 Also, Tempe Diablo Stadium has been the Angels home for 26 years and the mountainous scenery is breath taking.

What made this visit even more enjoyable was seeing another familiar face.

His name is Brad Ausmus and he's a Special Assistant to General Manager Billy Eppler.

Ausmus managed the Detroit Tigers from 2014-2017 and led the team to an A.L. Central Division Championship with a 90-72 record.

Overall, Ausmus compiled a 314-332 mark including a 64-98 record during his final campaign that saw Detroit's rebuilding process begin.

During Spring Training, Ausmus was real neat to work with. There were times that I didn't have clubhouse access because every team handles their operation differently.

With Ausmus, he used to hold his pre-game interviews in the dugout and was a pleasure to talk to.

That's what made this day even more enjoyable because it seemed like old times.

What is Ausmus missing right now with the Detroit Tigers?

A squad that currently has a 54-81 mark and the stress of trying to figure out the core of what this team is going to look like in the future.

He's also missing out on Victor Martinez' last season as well as Miguel Cabrera's absence in the line-up because of injuries.

But as we have in the past, we still had time to talk to each other but this time, we had an exclusive one-on-one conversation about the past and the present.

Q: Brad, I have to tell you, it looks a bit different to see you in these new red and white colors uniform than in the past. How is the adjustment for you?

A: It took a few days to get comfortable with after the last four years in Detroit. You get used to the Olde English "D", but like many people in the game of baseball, you wear many uniforms during the course of your career.

Q: I know you have a new challenge here with the LA Angels. What's it been like and tell me what your role is?

A: I'm here on the field in Spring Training quite a bit. I will be on the field some in the minor leagues during the course of the summer. Most of the time will be spent upstairs at "The Big A" during major league Angel games all summer long.

Q: Do you find that taking a year off from managing will give you the opportunity to regroup about what you're going to do? I know that you're relatively young (49) and I've talked to a lot of good friends in the business that are happy to take a breather and welcome the break.

A: I think it gives you a chance to decompress and have you do some things during the course of the summer where you can't do as a manager or as a player. It's a full-time gig, seven months from the middle of February until you hope until the end of October. You don't get to do things like summer vacations when you're involved in baseball. This job allows me to stay involved in the game closely and allows me to do some things at home.

Q: Let's talk about your tenure in Detroit. Can you reflect on that? 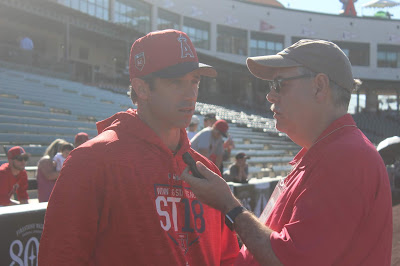 A: Overall, I enjoyed my time in Detroit tremendously. I loved the area, the heartbeat of the city, the fans are great fans and they love the Tigers in Detroit and all of Michigan. I wish we could have won a World Series without question. I felt bad that Mr. I (Illitch) didn't get to win a World Series.  That's possibly the biggest regret.

Last year was a tough year especially once we traded off pieces and the Tigers entered rebuilding mode. But quite frankly, I really loved the City of Detroit. As up and down as we had over the course of four seasons, the fans always showed up and they always wanted a winner, quite frankly.

Q: You had great players to work with especially Miguel Cabrera. How did you like managing him?

A: Miggy is easy to manage. He was the smartest player on that team. His baseball IQ is extremely high. He understands not only what he's supposed to be doing on the field, but he knows what everyone else is suppose to be doing.  He's easy. Miggy is the type of guy you wind up and let him go because he's going to do the right thing the vast majority of the time. The back issues hampered him last year. When Miggy's numbers fall back, it's more likely an injury issue.  He has played with injuries and didn't tell you about them. Miggy is a Hall of Fame Player and that I think has some years left in him.

Q: What were your thoughts about Justin Verlander being traded to the Houston Astros?

A: I wasn't happy and I didn't want to lose Justin Verlander, but I understood why the move was being made. Having played in Houston for 10 years, I sat down and talked to Justin after the trade for about 15 minutes about the area and about places he might want to live.

Just the fact understanding that Astros fans and the City of Houston would embrace him. I was there in 1998 when the Astros traded for Randy Johnson, I saw how the city embraced him that I knew Justin would get a similar welcoming. 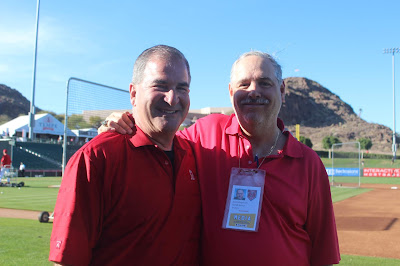 Q: You talked about the Tigers starting rebuilding last season. How tough of a challenge will it be for them?


A: I think Al (Avila) committed to the rebuilding process and Gardy (Ron Gardenhire) has done this before so he's an excellent man for the job.  It may take some time. There will be some growing pains, but I think it's a smart thing to do and in the long haul hopefully it puts Detroit in a position to win on a consistent basis.

Q: Finally, it's neat to see you every year in Spring Training and in Florida I liked watching you running around the field to get a workout.  How do you like being in the Cactus League compared to the Grapefruit League?

A: I can say this, the Cactus League travel is much easier.  Everything is within 45 minutes. So that's a bonus. I will say this though.  The Tigers have one of the nicest Spring Training Complex's and Stadiums in all of baseball. That's a big plus in Lakeland.

It's inevitable that there will be managerial openings at the end of the year.

Angels Manager Mike Sciosia is signed through the end of the 2018 season and Baltimore Orioles Pilot Buck Showalter could be at the end of his tenure in Maryland.

Ausmus is a bright baseball mind and you can rest assure that he will be quite selective about what type of challenge he'd undertake, and when he's ready to return to the pressure cooker.

Unlike former Arizona Diamondbacks Managers Bob Brenly, Kirk Gibson and former Tigers Skipper Alan Trammell who didn't get second opportunities to run a team, I don't see that happening to Ausmus.  It's not a matter of if he'll get another job, but a matter of when.

As for my return to seeing the Angels, I felt like I hit a grand slam home run spending time with Mead and Ausmus!

Scott Morganroth can be reached at scottbullm@aol.com and is a member of Detroit Sports Media.
- August 31, 2018