During our visit to the Cactus League in Arizona, there were no shortage of Southeastern Michigan storylines to talk about.

Last month we talked about "The One That Got Away" with Colorado Rockies second baseman DJ  LeMahieu.

The focus of this story also involves another player who plays in Colorado named Chris Rusin.

Rusin is a 31-year old left-handed pitcher who was born in Detroit and stands 6-2 and weighs 191 pounds.

As an amateur, he played for Divine Child High School in Dearborn and led the team to back-to-back state championships in his final two years there, while being named to the All-Star Dream Team in both seasons.

He would play his college ball at the University of Kentucky and graduated in 2009. He became Kentucky's first, first-team All SEC pitcher since Scott Downs earned the honor in 1997. 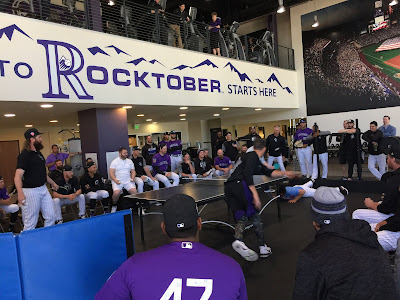 He began is career with the Chicago Cubs and was claimed off waivers from the Cubs on September 27, 2014.

While in the Cubs minor league system, Rusin threw a no-hitter for the teams AAA Iowa affiliate on May 7, 2014.

When I was at the Rockies Spring Training facility at Salt River Fields at Talking Stick in Scottsdale, AZ, I noticed he had a competitiveness that was displayed beyond the baseball diamond.

Before the Rockies took the field against the Milwaukee Brewers on March 20, 2018, we had a nice discussion on his road to the major leagues.

Q: Was it ever a dream of yours to play for the Detroit Tigers?

A: It's always a dream that you'd want to play for your hometown team. But it rarely ever works out that way. You always have it in the back of your mind hoping. I just want to play in the stadium (Comerica Park) as the away team. Hopefully, that day will come. I like it here and enjoy it here. But you know every kids dreams of playing in their hometown.

Once you actually get to the major leagues, it just kind of goes away. You just want to travel and play there on whatever team you're on, but it hasn't happened yet. Hopefully, it will come soon.

Q: As a Metro Detroiter, I'm sure you've probably heard of Mickey Lolich, who was instrumental in the Tigers winning 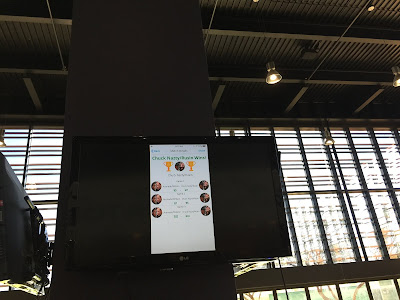 A: You know Scott, it's obviously an advantage to be left-handed. I'm not a power guy so that kind of helps with the deception. So I kind of use that to my advantage and it's been helping me get jobs when there are very few left-handers out there on the team. I'm trying to be as consistent as possible and work my craft more and more each year.

Q: It's funny how you say that because I've been covering the game for 39 years. I've seen marginal left-handers like Ray Fontenot and former Tigers Pitching Coach Chuck Hernandez that had outstanding moves to first base. Do you feel you have a pretty good move to first base?

A: Yes. I like to look at the runners body language that you don't want the other team to have an advantage. So, I take pride in controlling the running game, have done a good job over the years since I've been up here. I continue to work at it because you don't want the guy in scoring position especially if you come in late in the game. It's huge to keep them on first base and keep the double play in order. I take pride in that and still continue to try to work on it.

Q: Do you feel that over the years being left-handed is a huge advantage compared to a right-handed hurler? 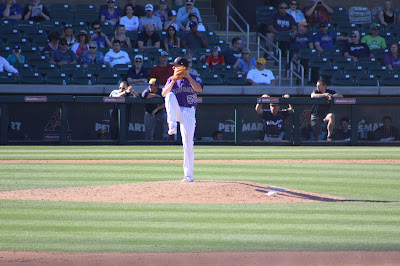 Q: You talk about pitches. Tell me about some of your better pitches in your artillery?

A: I rely on movement so left-handers with a two-seam gets on pretty quickly. The deception helps as well. A couple of off-speed that keeps them off the two-seam if they're trying to cheat in there. I have a good change-up and I like to use that quite a bit. That's pretty good for me.

Q: So do you view yourself as a power pitcher at all?

A: No, no. I'm definitely not a power pitcher. I probably top out at 92, 93 mph. I just rely on keeping hitters off balance.

Q: I know at one point you were a starting pitcher and you converted to a reliever. A couple of names that come to mind are Hall Of Fame Pitchers John Smoltz and Dennis Eckersley. Tell me what the transition has been like for you as I've looked at your numbers which drastically improved in that role.

A: Being a former starter in the role I'm in now, it's made it easier to switch because instead of covering six or seven innings, and trying to save your pitches, or go through everything in one inning, or the first two innings, I can throw everything in the first two innings that I'm in. The one, two or three outings I have, so I don't have to save anything. I can throw all different combinations out there then keep them off balance. It's worked well for me.

A: Yes, I like it. I just want to do what the team needs me to help. Wherever I can help out, whatever spot fits me the best, that's where I want to be.

Q: You had a chance to pitch at Comerica Park during High School winning championships. What was it like pitching in that venue?

A: It's a big park (laughing). You throw as many strikes as you can, let them hit it and see how far they can hit it. Chances are, it's not going out of that ballpark, especially in high school. I haven't pitched there in the big leagues so I'm not really sure. But it's obviously a lot bigger than Coors Field. The ball flies out at Coors. It's definitely a pitchers ballpark compared to Coors Field.

Q: How do you like pitching at Coors Field?

A: I like it. I think my pitches fit well there. I have short movements and it's tough for the hitters to pick up with how late it is. You have to worry about really keeping the ball down because obviously the ball flies.

A: I like it. It's an adjustment with the altitude and breathing with the recovery aspect of the game. I'm used to it and enjoy it.

Q: Let's talk about your incredible high school career. I was looking over your numbers and they were really good. You won championships at Dearborn Divine Child. Can you reflect back on that?

A: Yes, Scott. it was a crazy time. I enjoyed playing in big games. We had a great team and great coach. They just kept relaxed, loose, it was fun to be around the guys. It was always fun being in the championship run every year especially playing in Comerica Park.

Especially, that third time, my first two games were 1-0 wins and I'm wondering what's going to happen. I just went out there, blocked everything out, concentrated and I was able to throw a 1-0 victory. It's kind of a blur pretty much because it happened so quickly. I still have those tapes and look back at them occasionally to refresh my mind. It was a fun time. 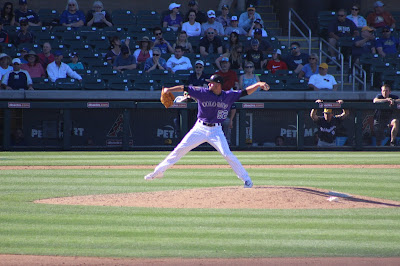 Q: Were those games when you were a starter?

A: Yes, a starter. I only had to pitch seven innings for a complete game. It was fun, it was a fun time.

Q: Can you visualize what it would have been like to play at Tiger Stadium?

A: I wish I could (laughing) but I've gone to a couple of games there. I love the stadium. It was a hitters ballpark if you kept it down the line. I would have loved to have played at Tiger Stadium.

Q: Unlike warm climates, how do you stay in baseball shape since you weren't able to play year round in Michigan?

A: They have indoor facilities and at our high school, we worked out in the gym and we played catch in the gymnasium. We had a work out place upstairs, so I pretty much did all the work indoors. When it wasn't cold or didn't snow, we did all our work outside.

Q: Finally, do you still keep tabs on the Detroit Tigers?

A: No, not as much as I did before I played in the minors or working my way up to the big leagues. I don't pay as much attention anymore. It's just another team. We're (Colorado Rockies) trying to beat all those other teams out.

As it stands at the moment, Colorado has a record of 72-60 and are 1.5 games out of the final wild card spot trailing the Milwaukee Brewers and St. Louis Cardinals.

The Rockies are only 1/2 game out in the NL West behind division leading the Arizona Diamondbacks.

There is no question he'll be needed during the September stretch run.

With his impending free agency, it will also be interesting to see where Rusin is employed in 2019. We'll find out in due time, but it was great talking to another hometown product that made his way to the big leagues.

Scott Morganroth can be reached at scottbullm@aol.com and is a member of Detroit Sports Media.