This Week In Football

The end of an era took place last weekend in My Hometown of Farmington Hills, MI.

Farmington Hills Harrison High School will close down after this year. The only coach in their 49-year history John Herrington won't be roaming the sidelines in 2019. 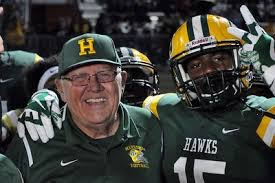 Herrington finishes with 443 career victories, most in MHSAA annals and 13 State Titles! You talk about the molding of kids into men, Herrington is a legend in every sense of the word!

Hope you have a great retirement coach because you deserve it! My only regret is I never had a chance to meet you.

But for all we know, who is to say that Herrington won't land at another school either on the sidelines or in another role. Stay tuned!

New Orleans Saints wide receiver Michael Thomas has been fined $30 K for using a cell phone while celebrating a TD against the LA Rams. The celebration was a tribute to Saints icon Joe Horn, who famously whipped out a cell phone after scoring a TD in 2003.

Horn was also fined $30 K. I'm surprised the fine wasn't more due to inflation attributing to bigger salaries. But there is no doubt that Thomas probably has a good accountant and will make good use of  the tax write off.

Pittsburgh Steelers Le'Veon Bell running back kept his word and has decided to sit out the entire 2018 regular season. Bell is seeking a contract in free agency of $17 Million per-season and $45 Million Guaranteed. Sacrificing the season means that Bell's body won't have any wear and tear on it. It wouldn't have been worth it to play a handful of games late in the season.

The Saints signed free agent wide receiver Dez Bryant and it took him just two practices to land on injured reserve as he tore his Achilles Tendon which will take eight months of rehabilitation. What worked against Bryant is he wasn't in football shape. But the silver lining in all of this is the Saints are willing to bring him back as long as he recovers, plus Dez wants to return to New Orleans.

Finally, the Miami Dolphins were fined $30 K and head coach Adam Gase was fined $15 K for the handling of QB Ryan Tannehill on the Week 6 injury report.

Tannehill was listed as a full participant on Thursday of Week 6 despite missing reps because of a shoulder injury. He should have been listed as a limited participant.

As it turned out, Tannehill was a game day scratch against the Chicago Bears. The 30-year old hasn't played since.

Scott Morganroth can be reached at www.scottsports33.com. He his a member of Detroit Sports Media and hosts The Sports Exchange on weinetwork.com on Tuesdays and Thursdays from 5-7 pm. He's also the CEO of The South Florida Tribune.
- November 18, 2018