Before I start this column, I want to wish everyone a Happy and Healthy New Year!

Tis the time of the year where you better cash in on your tax write offs.

And collect that last cash which will determine your yearly earnings.

We all expect coaching turnover the day after the NFL season ends.

This is called  "Black Monday."

In the past 24 hours, there have been some unexpected jobs that came open in collegiate sports. 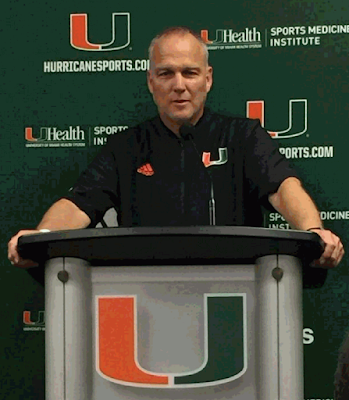 On Sunday, The Miami Hurricanes got a surprise they didn't expect.

After watching his football team get thrashed by the Wisconsin Badgers 35-3 in the Pinstripe Bowl on December 27, 2018, Head Coach Mark Richt abruptly announced his retirement.

I was hoping that when we got credentialed for the Hurricanes opening game against Savannah State University 77-0, that there would be an opportunity to write a story on Richt, who was coaching at his alma mater.

But thanks to some shoddy PR work by the Hurricanes Sports Information Staff, that never came to fruition.

Richt's story appeared to be a good one since it reminded me of Jim Harbaugh's return to Michigan.

Before I get to Richt's successor, let's go to the numbers.

Miami ranked as high as No.2 and it seemed like UM was on the road to national prominence.

In the end, the Hurricanes never seemed to develop a QB which was Richt's former position.

You have to have a signal caller and that seemed to be the downfall.

After the Hurricanes pounding of Savannah State on Saturday, September 8 2018, the most energetic person in the post-game press conference was Defensive Coordinator Manny Diaz.

A couple of weeks ago, Diaz was hired as the new head coach at Temple University. He decided to coach the Hurricanes in their bowl game in New York.

When Richt's announcement came, there would be names mentioned as his successors.

But to the Hurricanes credit with the cooperation of Temple University, Diaz didn't have to move up I-95 to Philadelphia to coach the Owls.

Instead, he was offered and accepted his dream job in his hometown of Miami working at a Power Five School, albeit with no head coaching experience.

Now he has the task of trying to resurrect a program that has failed to win an ACC Championship and attempt to fill a stadium which is tough to do when you're winning.

Diaz, who created the "Turnover Chain" will have a lot of links to connect to bring this program back to prominence which Howard Schnellenberger originally turned around.

I really thought Richt was the guy, but now he'll get to ride off into retirement world, though I do feel he quit on this program and had left unfinished business to take care of.

Although, he did donate $1 Million to finance a badly needed Indoor Practice Facility.

Nonetheless, I wish him well.

Another Coaching move that stunned me this morning was UCLA deciding to fire Head Coach Steve Alford.

Alford was hired by the Bruins in March of 2013.

During his first season in Los Angeles, he went 28-9.

Alford made appearances in the Sweet 16 three of four years at the helm, but were eliminated as part of the First Four in last years NCAA Tournament.

UCLA has started 7-6 and was on a four-game losing streak when Athletic Director Dan Guerrero decided to pull the plug on his employment.

During that losing streak, the Bruins lost at home to Liberty, and Ohio State while also falling to Cincinnati by 29 points.

Alford will have no problem landing another job down the line.

On a future Sports Exchange Show, I hope to land former UCLA Basketball Play-By-Play Announcer Chris Roberts to talk about what it's like to coach at Westwood in the shadows of iconic Coach John Wooden.

He's a member of Detroit Sports Media and is Co-host of The Sports Exchange on the weinetwork.com with Peter Wein that runs on Tuesdays and Thursdays from 5-7 pm.

He's also the Founder and CEO of The South Florida Tribune.