As the year winds down, it's time to reflect and plan ahead.

During a recent visit with former College Basketball Coach Mike Jarvis at Dunkin Donuts in Deerfield Beach, FL., we had the time to talk about old times when we worked together as I was covering the FAU Owls. 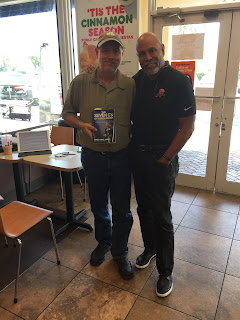 We also talked about plans for promoting his upcoming book, "The Seven C's of Leadership" which I'll get into details at a later date.

As I work towards completing my comeback in radio and building my online Publication "The South Florida Tribune" as well as other future endeavors, I looked to Jarvis for guidance as I've tended to do in the past.

We talked about what events I'd like to write and talk about in the future?

Whether I pull them off is another story, but I'm certainly going to try to work on some of these this year.

The QB that gets this process started is my longtime brother from another mother and esteemed colleague George Eichorn.

What will it take to get to some of these places and events?

For one, good health, and manipulate the finances to make these happen.

In order to keep peace with my spouse, I have a feeling that on occasion, I might have to ride solo so she doesn't get upset with me so we can make our annual trips to Michigan and Wisconsin.

So here we go.

1. I've always had a burning desire to cover the Rolex 24 Hour Race in Daytona Beach, FL. That race takes place from January 26-27. To cover an event for 24 hours especially with the adrenaline rush associated with Motor Sports would be neat. This is very attainable. A few hours up I-95 North gets the job done. 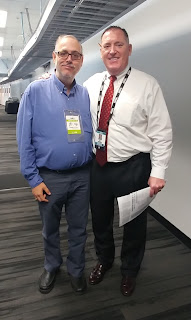 2. On the Sports Exchange, we had NHRA Driver and Owner Lex Joon on the program, and we discussed the possibility of me getting involved with The Gator Nationals. This year is the 50th Anniversary of the event and it takes place from March 14-17, at the Gainesville Raceway. Lex and I talked about me getting involved in one of the NHRA Hot Rods. Very attainable! A four hour drive up I-75 North does the trick.

3. I've been talking about this one for the past few years. I've always wanted to see The Jacksonville Jaguars play an NFL Game at Wembley Stadium in England. My Great Friend Dan Edwards (in the photo) has always told me if I can get there, he'll accommodate us. We had this conversation recently and I told him that we need goals and things to shoot for in life. He's just waiting for me to let him know.

Besides, my wife would like to tour Wimbledon and explore the history of this historic area. Since I've never been overseas, this would be a great place to start.

4. In 2018, we hit eight Spring Training Venues in Arizona. There are two remaining. The Cubs have a new facility in Mesa while the San Francisco Giants play in Scottsdale. We need to finish this plus see the Milwaukee Brewers renovations in Phoenix and what would a trip to that area be like without seeing My Great Friend, Tim Mead with the Anaheim Angels in Tempe.

5. Why would I want to cover this next event, The CFL's Grey Cup? The major motivation is since I've covered four Super Bowls, a USFL Championship, this will give me an opportunity to cover North America with Pro Football Championships. We've had some CFL guests on the Sports Exchange, now it's time to meet a few.

6. Finally, there are a handful of Spring Training venues left in Florida. But since it's in state, a car trip or weekend is all it takes to get this done.

There are other events I'd like to hit as well.

I'd like to see a game at Fenway Park in Boston and attend the Kentucky Derby at Churchill Downs. There are lots of new stadiums in all sports around the country, in addition to motor sports race tracks I'd like to hit on the trail, but for now, this is a good starting point.

Tell me what you think.

Scott Morganroth can be reached at www.scottsports33.com. He's a member of Detroit Sports Media.

His radio show The Sports Exchange can be heard on the weinetwork.com with Peter Wein from 5-7 pm Tuesdays and Thursday. He's also the Founder and CEO of The South Florida Tribune.
- December 31, 2018