There is one thing the NFL doesn't like to do and that's realign divisions to create new rivalries unless it really has to.

If the league did, there would be one match-up that would occur more often than it does. 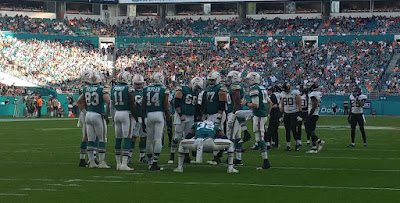 The Miami Dolphins would face the Jacksonville Jaguars.

Prior to their game December 23, 2018 game at Hard Rock Stadium, the teams had only met eight times since Jacksonville joined the league in 1995.

This game was only the third time these squads ever met in Miami.

The first time these two teams met in Miami was on December 3, 2006 when Jacksonville left South Florida with a 24-10 win.

Jacksonville finished the campaign 2-14 and Head Coach Mike Mularkey was terminated after one season.

I attended this game.

But for a series with very few moments, there have been some interesting results and connections.

First of all, prior to this game, these teams were 4-4 including the playoffs with Miami owning a 4-3 edge in the regular season.

But the Jags have owned this series when it mattered the most.

Jacksonville thrashed Miami in the Division Playoffs 62-7 on January 15, 2000 in what turned out to be the last game ever for Dolphins Coach Jimmy Johnson and QB Dan Marino.

This game was played in Jacksonville.

The QB who defeated the Dolphins was Jay Fiedler, who ironically has the same birthday as myself on December 29. He was born in 1971 while I started breathing in 1962.

After that win over Miami, he proceeded to sign with the Dolphins inking a three-year deal worth $3.8 Million.

During his time with Miami, he led the Dolphins to an AFC East Title along with two post-season appearances.

Fiedler is the last Dolphins QB to win a playoff game as Miami defeated the Indianapolis Colts 23-17 in overtime on December 30, 2000 at Joe Robbie Stadium.

Fiedler would later be inducted into The National Jewish Museum Sports Hall of Fame in 2002.

What would or wouldn't we see on this day?

We wouldn't see Dolphins future Hall of Fame running back Frank Gore, who was placed on injured reserve.

What we would see was a defensive game as both teams were tied 7-7 entering the third quarter until Jacksonville ultimately was led by QB Blake Bortles and it's highly touted defense to win 17-7.

The loss dropped the Dolphins to 7-8 and they were officially eliminated from the playoffs.

As it turned out, this was the last home game for Miami Coach Adam Gase, who was fired on December 30, 2018 following an embarrassing 42-17 road loss to the Buffalo Bills in Week 17. The Dolphins finished the regular season 7-9.

So here we have it, another game in Miami, and two coaches would be fired on that Black Monday named Mularkey and Gase in their respective years, 2012 and 2018.

It appears that both starting QB's will be looking for new homes in 2019.

There has been talk that the Jaguars are ready to move on from Blake Bortles while the Dolphins have seen enough of Ryan Tannehill.

I'll be curious to see when these teams meet again, but you can rest assure for a rivalry that has seen so little, it's seen a lot!

The Jaguars now own the All-Time Series 5-4.

Jacksonville is 2-0 in games when they punched the Dolphins in the gut.

Scott Morganroth can be reached at www.scottsports33.com.
He's a member of Detroit Sports Media.
He's the Founder and CEO of South Florida Tribune.
He's the Host of The Sports Exchange on the weinetwork.com which airs on Tuesdays and Thursdays from 5-7 pm with Peter Wein.