I'll never forget the time when my longtime colleague and close friend George Eichorn asked me to write a few paragraphs about all of the Detroit teams when they were struggling in the late 1970's for the Detroit Monitor.

This happened to be the first time that I was published.

I impressed My Lakeland High School English Teacher Mrs. Ann Nozewski, who wanted every student to make an attempt to do this.

Fortunately, my second time getting published was a short story on the US Not Boycotting The 1980 Olympics, which President Jimmy Carter wanted us to Boycott The Olympics.

That would later backfire as the Soviet Union Boycotted the Olympics in 1984 at Los Angeles which I attended.

Nevertheless, lets move the clock forward to 2019 and while Nozewski certainly provided the impetus for me to get published, 40 years later, I'm still going strong!

Back in the 1970's all of the Detroit Teams were struggling. 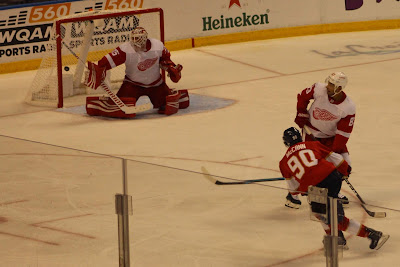 But at least during that time period there have been some championships along the way.

The Tigers 1984 Season produced a World Series Championship along with three Hall Of Famers. Those include Manager Sparky Anderson, Shortstop Alan Trammell and Pitcher Jack Morris.

The Pistons won three World Championships which has produced Hall of Famers and retired jerseys in the rafters. In the Bad Boys era of the late 1980's, those included Coach Chuck Daly, Guards Isiah Thomas, Joe Dumars and forward Dennis Rodman. Dumars was an executive when the Pistons won another title in 2004.

The Detroit Red Wings made it to the playoffs 25-straight years and won four Stanley Cup Titles.

The rafters are getting crowded with more retired numbers in addition to the championship banners. Two Hall of Famers and former Captains are Yzerman and Nicklas Lidstrom.

And the Lions....they've won one playoff game and Barry Sanders made it to the Pro Football Hall of Fame.

I enjoyed covering Barry from my Pontiac Silverdome Press Box vantage point watching him rise to being the third leading rusher in NFL History.

There was a period of time that I covered all 16 games at home and on the road.

To this day, I'm convinced that if Fontes was not fired and replaced by Bobby Ross, Sanders would be the all-time leading rusher as Barry viewed Wayne as a father figure.

Whether Calvin Johnson gets there remains to be seen.

The fans are waiting for QB Matthew Stafford to be surrounded by a good supporting cast that will at least get him a playoff win.

It's an eyesore when Sanders and Johnson retire in their prime because of the losing culture.

Unfortunately for Lions fans, they're one of two members in the 0-16 club and haven't won a championship since 1957.

Time will tell whether the Patriot Midwest Way anchored by Coach Matt Patricia and President/GM Bob Quinn can duplicate itself in a football starved town which is looking for any kind of success it can get.

1. The Detroit Red Wings--living in South Florida, the Panthers made a coaching hire I hoped the Red Wings would have made in the Motor City by landing veteran coach Joel Queeneville.

The former Windsor Spitfires coach is second all-time in regular season wins with 890 and 118 more in the playoffs, plus three Stanley Cup Championships with the Chicago Blackhawks.


The Red Wings future just became much brighter when they hired Steve Yzerman as Executive Vice President and General Manager on 4-19-2019, Good Friday.

The Columbus Blue Jackets made the obvious happen by sweeping Tampa Bay 4-0 in their opening round series.


Yzerman had successful stints as being an Executive Director for Team Canada and The Tampa Bay Lightning.

There is no reason to think he won't be able to get the Red Wings on the right track in time.

Yzerman will have former GM Ken Holland by his side as he was named Senior Vice President as a major resource.

Holland does has a proven track record guiding the club to Stanley Cup Championships.
I hope his patience is rewarded as he extended Coach Jeff Blashill by two additional seasons.

I think it's smart that Yzerman will honor the Blashill extension.

He worked well with another young coach in Tampa Bay. That being Jon Cooper who led the Lightning to the President's Trophy.

There is no reason to think Yzerman won't work well with Blashill.

But the key to any turnaround while Detroit is in a massive rebuild, the Red Wings must continue to hit on their draft choices.

I respect them for not tanking in an effort to get the No.1 pick in the NHL Draft as they ended up sixth.

I'll continue to invest in the Center Ice Package hoping the younger players ultimately start maturing. But let's face reality, the 2019-2020 season will be the most pivotal one in the direction of this proud Original Six Franchise which owns 11 Stanley Cup Championships.

2. The Detroit Tigers--also owned by the Illitch family are also in rebuild mode.

We get the MLB Package and while the Tigers are trying to develop from within, they're slowly freeing up money from undesirable contracts.

For a team that has made it to the World Series twice under retired Skipper Jim Leyland only to come up short, can another veteran Manager Ron Gardenhire see this project through and reap from the benefits in the next couple of years?

Time will tell as to what comes up from the farm. 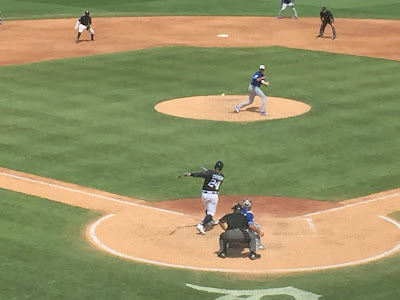 But like the Red Wings, patience is something Owner Chris Illitch doesn't seem to lack as he remains loyal to his key front office people.

The one thing about baseball is teams can turn their losing fortunes around in three years and go from worst to first quite quickly as we've found out from the success of the Houston Astros and Chicago Cubs that ultimately led them to World Series Championships.

Just build a good young core of players and lock them up to long term contracts. Then keep building their farm systems.

The Tampa Bay Rays seem to make a lot out of nothing because of strong player development then find solid veterans to blend in.

3. The Detroit Pistons--had the distinction as the first team to play a playoff game in Little Caesars Arena (LCA).

During the regular season, the Pistons were swept 4-0 to the Milwaukee Bucks.

As a result, Detroit now owns the longest playoff losing streak in NBA History with 14.

Despite Griffin playing in two games, it never mattered, and after the season was over he underwent arthroscopic surgery on his left knee.

Milwaukee is considered favorites to win their first NBA Title since 1974.

But getting rid of Stan Van Gundy was a positive step last season. He trades the team's top draft choice to the LA Clippers who had a 48-34 mark in the Western Conference. Like the Clippers, the Pistons are the eight seed but compile a 41-41 mark.

Had Blake Griffin been healthy towards the end of the regular season, they wouldn't have drawn the match-up they ended up with.

Nevertheless, I do believe that Dwane Casey was a coaching upgrade over Van Gundy.

But until the Pistons get financial flexibility and start hitting on their draft choices, it wouldn't matter if they are playing downtown at LCA or the Palace Of Auburn Hills, the fans won't fill the stadium until they're convinced they're a legitimate entertainment option.

4. The Detroit Lions--There isn't much to say about this franchise except that I hope they don't waste away the career of another star player. 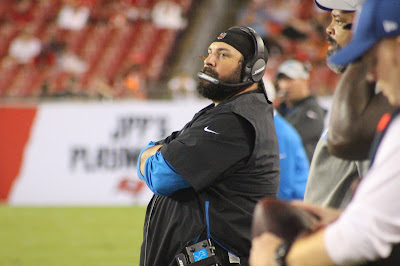 Contrary to what people say about Stafford, I do believe he's the best QB the Lions have had since Bobby Layne. He's the all-time leading passer in franchise history with 38,526 yards and 237 TD passes.

The team was relevant when Wayne Fontes was the head coach.

Does anybody remember the last QB to win a playoff game?

He eventually left to play for the Chicago Bears.

In 1987, Jerry Vainisi was the Vice President of Player Personnel and when he departed to create and head the football operations of the World League of American Football (NFL Europe), the Lions haven't been relevant since in the front office.

He was a key contributor in the Lions success which produced a 38-6 win over the Dallas Cowboys as Detroit reached it's lone NFC Championship Game only to get clobbered on the road to the Washington Redskins 41-10. 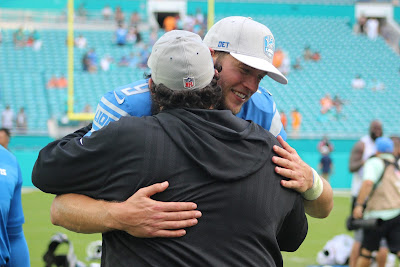 Unfortunately, I can't offer a guess as to who will break through and will create Metro Detroit's next championship wave of success.

If I was so smart, I would be working in the front offices of these teams.

So I'll hang out at the beach in sunny Florida and still cover these squads when they come here, when I'm in Metro Detroit, or if they play in a place I travel to get answers like the rest of us.

I do watch the Lions at Duffy's Sports Bar in South Florida.

In the meantime, I'll pull out my Rubik's Cube and try to conquer that puzzle.

But in the spirit of Mrs Anne Nozewski wherever you are, at least more people have heard about me because of my lengthy tenure in the media, my additional platforms, along with people trying to google my name.

Once upon a time at the beginning there was the Detroit Monitor. Now I've created an online publication, https://southfloridatribune.com/.

Now, I still have Eichorn around and there is Cyber Space which enables me to write on numerous platforms.

Scott Morganroth can be reached at southfloridatribune@gmail.com.