Faith Day At The Ballpark

Happy Palm Sunday Everybody from the Sunshine State filled with Palm Trees. 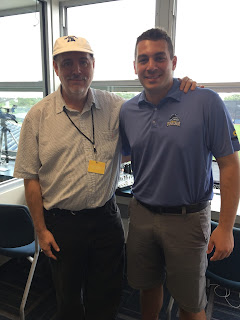 I've seen a lot of promotional days throughout the years covering baseball as well as other sports, but this one is different.

Today Candy Ebling and I took our act on the road to begin our first trip to see the Florida State League as we expect to see all 12 teams home games.

This road trip was 185 miles from our home in Deerfield Beach, FL which took close to three hours.

During the 2019 Season, we'll be providing material for the South Florida Tribune and interviews for the Sports Exchange which airs on Tuesday and Thursday from 5-7 ET  on the weinetwork.com.

Today's column is the first of those 12 stops and we'll also be covering the FSL All-Star Game from June 14-16.

There will be a future interview with retiring FSL President Ken Carson on a future edition of the Sports Exchange.

At the end of the season, we'll issue a Final Grade for each club that will be based on the environment as well as the Media Relations Department's ability to deliver human interest stories in an effort to see how well they promote their ballclub.

I'll be doing my best to notify FSL Media Relations Directors hoping to get return communication in an attempt to make our job easier when we get to the ballpark to avoid an unsatisfactory outcome.

Throughout the years I've always enjoyed covering the Advanced A Florida State League because  teams top prospects perform in the same ballpark which houses the Major League Club.

During the 1980's, I covered the Fort Lauderdale Yankees and The Tampa Tarpons (Reds). 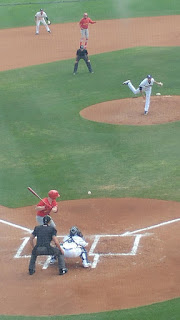 In  addition to producing players, the FSL also produces managers and coaches, many of whom have been former MLB Players or have had lengthy Minor League Careers who didn't reach the Big Leagues.

There are many great players and managers that ultimately made it to the Major Leagues one way or the other and there are too many to mention.

At any rate, today's game is different as the game started at 10:30 am. Today's early start reminds me of our time in Hawaii when we were at my nieces wedding, and baseball games on the East Coast would start as early as 8 am.

Get them over early and you have the rest of the day for yourself.

John Vittas, who is the Broadcasting & Media Relations Manager for the Charlotte Stone Crabs said, "It's our second year partnering with Awaken Church, who hosts a non-denominational church service from 8:40-9:40 am at the ballpark.

"Members of their congregation are encouraged to stay at the stadium following the service to enjoy the baseball game."

This is a very smart concept.

This makes it more affordable for the fans as they'll have money to buy souvenirs at the gift store.

Prior to all Sunday games, fans are permitted to play catch on the field before the game, creating their own "Field of Dreams."

As for the game itself, one of the few teams which actually uses the name of it's parent club is the Palm Beach Cardinals.

The Stone Crabs lost 5-3 to the Cardinals.

The loss was the fifth in a row for the Stone Crabs. They dropped to 3-8.

After the contest, I was hoping to speak to Pitching Coach Steve "Doc" Watson and Coach Ivan Ochoa and General Manager Jeff Cook, but none of those conversations transpired.

You can hear my entire interview with John Vittas on a future edition of the Sports Exchange.

For updates on this and future stories, you can like the South Florida Tribune and Sports Exchange Pages on Facebook.

Meanwhile, Happy Easter and Passover to Everyone.

The accompanying shows which base to back up in the event that you are the pitcher and there's a hit that goes into the outfield. 토토사이트

Wow! Such an amazing and helpful post this is. I really really love it. It's so good and so awesome. I am just amazed. I hope that you continue to do your work like this in the future also Radiologie Paris

I appreciate this article for the well-researched content and excellent wording. I got so interested in this material that I couldn’t stop reading. Your blog is really impressive. 結婚指輪 福岡

I love visiting sites in my free time. I have visited many sites but did not find any site more efficient than yours. Thanks for the nudge! 婚約指輪