The first drafts I covered were back in 1982-83 when I was a writer for the Hallandale Digest.

As a young student learning on the job, I have to admit that working with Miami Dolphins Coach Don Shula was quite intimidating.

But as I got to know Shula, especially during training camp, I became more comfortable and he eventually warmed up to me.

I also used to cover the NFL Draft on a regular basis at the Pontiac Silverdome as a writer for the Detroit Monitor covering the Lions during the 1990's.

I'd spend all day Saturday and Sunday going through tons of player notes on paper, talking to assistant coaches and of course the head coach had his meeting with us after each pick.

I learned a lot about football talking to these coaches.

My work bag was filled when I left the stadium and I didn't even own a laptop computer at that time. 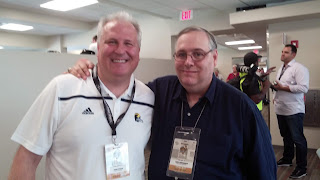 The Lions PR People Bill Keenist, Mike Murray, James Petrylka Sr. (whose is picture with me on the right) made sure we had everything we needed.


These three guys were like a Dream Team and I've maintained these friendships throughout the years!

The two head coaches I worked with were Wayne Fontes and Bobby Ross.

The Lions traded their first round pick, to the New Orleans Saints for Pro Bowl Pass Rusher Pat Swilling. This pick was the eighth overall.

On the surface, the trade looked good for the Lions as Fontes raved about how happy he was that he could give opposing QB's nightmares.

Fontes was smoking his cigar because he had his marquee pass rusher.

Detroit would go to the playoffs in both of Swilling's two seasons only to lose to the Green Bay Packers twice. He went to one Pro Bowl for the Lions.

They selected offensive tackle Willie Roaf out of Louisiana Tech.

During his nine seasons, he made seven Pro Bowls. He was inducted into the Saints Hall Of Fame and Ring Of Honor.

After Roaf left New Orleans, he played for the Kansas City Chiefs and added four more Pro Bowls from 2002-2005.

Roaf was elected to the Pro Football Hall Of Fame on February 4, 2012.

There were 12 rounds over two days.

I would spend an average of about 15-18 hours at the Pontiac Silverdome on Saturday and Sunday. 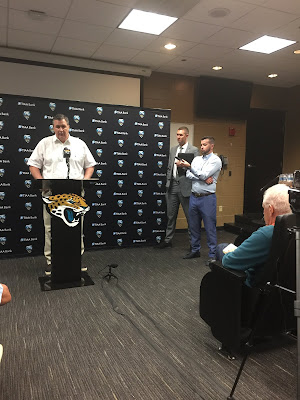 The Lions fed us real well!

As I cover my first draft in 2000's, so many things have changed.

The Draft is in PrimeTime on Thursday and Friday then it wraps up on Saturday. The draft is only seven rounds.

It also rotates to a different city each year and draws hundreds of thousands of people which is a boon for the local economy. This year's host Nashville had over 600,000 people attend the event.

This year's draft was watched by a record 47.5 Million viewers.

ABC aired the coverage for the first time in primetime.

Ironically, the Lions had the eighth overall pick in this draft, but this time they kept it.

It turned out to be Iowa TE T.J. Hockenson.

But now I'm in a new stadium. It's called TIAA Bank Field, home of the Jacksonville Jaguars.

Once upon a time, it was called The Gator Bowl, the home of the Florida/Georgia Football Game border war as well an annual Bowl Games.

It's changed names a couple times since I've covered games writing about the Jacksonville Jaguars.

There are no completed round-by-round draft sheets or bios of every player.

This place is practically paperless and everything is found online, just a finger click away.

If you want up to the minute updates then go to the internet where you can find anything you want, who, what, when, where and why, all within minutes.

Tom Coughlin had a press conference at the end of the draft.

I didn't know a single beat writer by name although I recognized the faces when I saw them covering the team during previous regular seasons.

Yet, they and all the other media members were all pleasant to work with.

I feel like I'm one of the elder statesmen in the room which is kind of neat.

I was unable to cover the First Night on Thursday because Peter Wein and I were broadcasting 'The Sports Exchange' on the https://www.weinetwork.com/.

But I've always believed that Super Bowls are won beyond the first round. 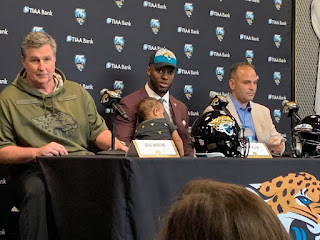 On Friday, the Jags introduced Defensive End Josh Allen, their first round pick to the media.

Allen was selected out of Kentucky with the seventh overall selection.

I asked Allen did his selection bolster Kentucky's credibility when Kentucky is considered a basketball school?

"I did everything I could to change the program," Allen said. "I just did my part. This just came with the success. Kentucky is on the right track. We won 10 games. Hopefully we will win the same or more next year. I wish them nothing but the best, but I left my footprint on my teammates.

"Hopefully, they understood what I did, what I sacrificed and hopefully they can do the same thing and become a great team."

Allen is only the second Wildcat ever drafted by the Jaguars, and the first since Jacksonville selected safety Marlon McCree in 2001 in the seventh round.

The Jags struck again by nabbing another SEC player. This one was two hours down the road and played in Gainesville, FL.

Jacksonville traded up with the Oakland Raiders in the second round to land offensive lineman Jawaan Taylor from the Florida Gators.

He declared for the NFL Draft following the season.

He played in all 13 games and started 12 at right tackle. Florida's offensive line allowed just 18 sacks over the course of the entire season, which ranked 20th in the country and third among SEC teams.

As for Caldwell, since he began his tenure as the Jaguars GM in 2013, Jacksonville has selected a player from the SEC in the first round in five of his seven drafts.

The small schools finished out the second night.

On day three, Jacksonville didn't have a selection in the fourth round.

But with the second pick overall in the fifth round, running back Ryquell Armstead gets to make the trek down I-95 South as the Temple product will start his career in Northern Florida.

Last year QB Nick Foles played in Philadelphia for the Eagles and now Armstead will follow Foles to town.

Armstead is 5-11, 215 pounds that could be a good combination back as a receiver and a runner.

The later the draft the more interesting it became.

Round No.6 enabled Jacksonville to land QB Gardner Minshew II of Washington State.

He was set up for success by playing for Washington State Head Coach and offensive mastermind Mike Leach.

He also set Pac-12 Conference and WSU single season records in passing yards (4,779) and completions (468). Add to the fact that he amassed 38 TD's and was the only player in the country with six 400-yard games and 11 300-yard games and you have a potential steal at the end of the draft! He only threw nine interceptions.

Jacksonville's seventh round and final selection in the draft produced defensive tackle Dontavius Russell out of Auburn.

When it was all said and done, Jacksonville selected four players from Power Five Conference Schools. Three came elsewhere.

Before this weekend, the team made changes to upgrade their roster and went into the draft looking for ways to give newly acquired QB Nick Foles some help to get themselves back into the playoff picture. 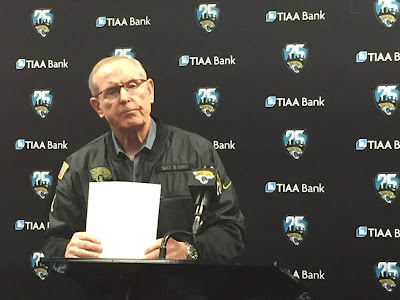 Time will tell which of these players make an impact.

But of these picks, I will admit, the ones that intrigue me the most are Armstead and Minshew II.

It doesn't matter when you're covering a draft, the theme is consistent.

These guys are just prospects!

Nobody knows how they're going to turn out until you see them on the field, study film and actually find out how much talent they really have.

Throughout the weekend, I continued to learn more from the individuals made available at the press conferences.

They all bring something to the table.

But when I turn back the clock back to the 1990's and work in this millennium, I'm amazed at how much the news cycle has indeed changed.

Therefore, in the end, it was an opportunity to think about the old and now new memories.

As always, the Jaguars PR Staff treated me great this weekend! I can't ask for much more than that.

Scott Morganroth can be reached at scottbm33@gmail.com.