If common logic had anything to do with the draft process, there would be no such thing as busts in any draft, especially the NFL Draft.

But that's not the case and I'm not going in that direction.

In the last article, I summarized all of the Jaguars draft choices.

Jacksonville traded up with the Oakland Raiders in the second round, 35th overall, to select Jawaan Taylor, who played for the Florida Gators.

This seems like an excellent move as the tackle should be able to protect free agent QB Nick Foles.

At 312 pounds, Taylor could be my body guard.

After these two picks, the intrigue starts.

As I took the five hour trek back home on I-95 South, the three picks which standout in my mind are TE Josh Oliver (San Jose State) who was selected in round three. 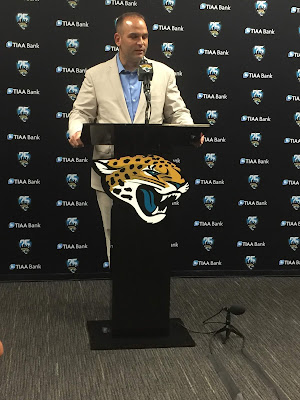 
Instead of throwing out zillions of statistics and attempting to convince you this prospect is good, I'll let the key individuals explain the thought process behind the selection.

Let's start with Oliver, who played with multiple QB's last season at San Jose State. For the Spartans, he caught 56 passes for 709 yards, and four TD's. He averaged 12.7 yards per catch and his longest reception was 70 yards.

Oliver was third nationally among FBS tight ends and led the team with 56 receptions.

Thirty eight of his 56 receptions resulted in a first down.

His 709 receiving yards was fifth nationally among FBS tight ends.

General Manager Dave Caldwell said that Oliver "is an extremely athletic guy with a lot of production. I know it was really frustrating for him because he really wanted to win. I think he made the most of it, but it was impressive how he kept his head up and kept playing hard and playing at a high level." 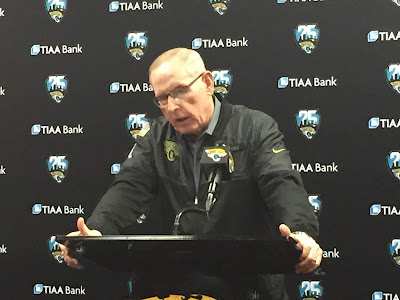 "We've been talking about a tight end forever and not done anything about it," Coughlin said. "Josh Oliver is a guy that can run. He's a run after the catch guy. People knock him a little bit for blocking, but I think as a move guy and as a detached guy, motion guy in the backfield, I think he can handle all of those types of runs. The screen blocking, etc. He can reach (block) and put his hat on the outside and make people run with him and that kind of thing."

In the 2017 Draft, Jacksonville selected RB Leonard Fournette in the first round, fourth overall out of LSU.

In an effort to shore up their running game, the Jags added Alfred Blue (formerly of the Houston Texans) then drafted RyQuell Armstead in the fifth round, 140th overall. Now the Jags have a solid running back room.

These are the types of selections that make scouting and personnel departments look like geniuses. As I found out during these two days, the evaluation process of a player can have as many as 10 people involved.

There are coaches, scouts, player personnel as well as the executive brass looking at film, attending the scouting combine, College All-Star Games, etc...

I also found out that the wonderlic timed test which determines IQ is somewhat important, but during the evaluation process, talent evaluators acknowledge that players learn visually as well.

These individuals admit that they'd be nervous about taking such a test. Yet, as I mentioned, it's still part of this process.

Nonetheless, the deeper into the draft, this is what leads to Super Bowl contenders.

I left Jacksonville turning my head on a few players and Armstead could cause defensive coordinators tons of headaches.

He became the 11th player in Temple History to eclipse that plateau.

Jaguars Assistant Director of Player Personnel Andy Dengler talked about the guy who played up I-95 North in Philadelphia.

"He's really fast, you can see it on tape," Dengler said. "He ran a 4.45, 22 reps on the bench. He's been a really productive player at Temple. He'll provide a lot of good depth for us. Explosive and he's good in pass protection as well."

"Matt Rhule texted me right away when we took him and said, 'Yes, sir. He's a winner.' We're excited about that. A guy who is tough and has the ability to make that one cut and get to the goal line. He will be 222-223 pounds when he gets here. Runs very well."

In the 2000 NFL Draft, the New England Patriots drafted Michigan QB Tom Brady in the sixth round, 199th overall. Brady is 6-4, 225 pounds and he's a classic example that you don't need to draft a franchise QB in the first round.

I want to make one thing very clear.

I'm not putting the pressure on Minshew III to live up to what Brady accomplished.

But Minshew was selected 178th overall and in the sixth round.

In 2018, he threw for 4,779 yards, 38 touchdowns and just nine interceptions for Washington State Head Coach Mike Leach, an offensive mastermind.

He finished fifth in the Heisman Trophy voting.

While I won't put too much pressure on Minshew III, that didn't stop Coughlin from gleaming about this guy especially his intelligence.

"When we interviewed him in Indianapolis, he came in and said, 'Yeah, I know I'm too short, too slow and my arm is not good enough. But I just went to Washington State and won 11 games.' Not bad. As a matter of fact, he probably should have won 12 because they got beat by USC along the first part of the year, and had a chance to drive the ball at the end of the game and win, and they weren't able to do that. He is a really interesting kid." 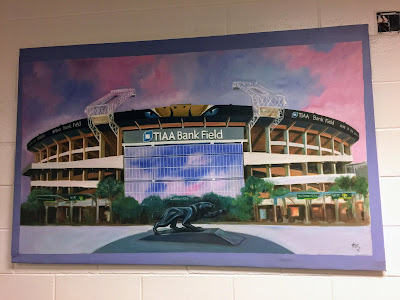 Coughlin continued to rave about Minshew III as he talked about the impressiveness to process information.

"Wow. Can you imagine that? He is headed for Alabama and as you guys have noted, he's thinking of his first step into coaching," Coughlin said. He goes out to Washington State in the summer. He has nothing else going for him, he doesn't know anything about anything. He studies, he's in the weight room.

"What he is, is a gym rat. He's hanging around, he's doing this and that. You watch him play and it looks like he's been there forever. As I said, the real thing about this guy is the competitiveness. He's very smart, he's very sharp. He loves the game, he loves the study part of the game. He'll be a great guy in the classroom with the coaches. He will suck up all that information up and then based on what we have seen, he will go onto the practice field and carry it with him.

"Some guys can't do that, or don't do it as fast. They don't process. They're not as quick. I think this guy will be quick. Now does he have to learn some things? Yeah, because he's going to be up under center. He's not going to stand back there in the shotgun the whole time. If you were to tell me that you don't think the guy can throw play-action passes from the tackle box, I don't believe that.

"I think he can do that and do it well. We're excited about the competition that will now take place with those three young guys that play behind Nick (Foles). It will be a great situation for us."

For a guy that has two Super Bowl Championships with the New York Giants pairing with Eli Manning, Coughlin knows what he's talking about.

On Friday Night, Caldwell was pleased with what the Jaguars accomplished with his first three picks.

"We wanted to come out of our first three picks with a pass rusher, an offensive tackle and a tight end and then a linebacker with our next one," he said. "So we felt like we checked the box on all four of those and we're happy with how that happened. Our last pick was Quincy Williams out of Murray State."

I asked Coughlin if there were any guys they drafted that he was surprised that they fell to the team. "The first guy. Then we took the first guy, the second guy (laughs)."

As for Coach Doug Marrone, the evaluation process really begins.

After the seven players were drafted, Jacksonville went on to sign 21 undrafted free agents on Sunday.

The parking lot at TIAA Stadium will be busy over the next several months as rookie mini-camps, mini-camps, off-season training activities, training camp and pre-season games will take place.

Jacksonville finished the 2018 season with a 5-11 mark and failed to reach the playoffs, amid high expectations following an AFC Championship Appearance which left them short of making the Super Bowl.

To say that the 2019 season is pivotal would be mildly stating the obvious.

Owner Shad Khan has been patient and has invested money to put a winner on the field.

The NFL Draft reminds me of Spring Training as everybody is happy that they have a new season and lease on life.

I'm glad this is over because now it's time to evaluate players and get to the nitty gritty.

During my 40 years of covering sports, I've covered them on all levels. 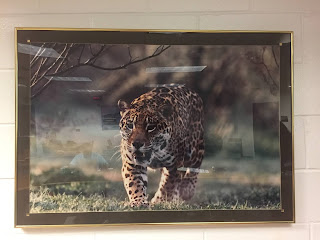 From collegiate sports, to the minor leagues, etc...I've always been intrigued by the process.

But it doesn't take a genius to figure out that you can't teach hard work and gauge or measure what's in a person's heart.

Yes, players better be talented as well but don't overlook the other intangibles.

We'll find out in time whether this cat will prowl it's way back into the playoffs with a newly revamped roster.