Is Dwight Howard Worth The Trouble?

If there is ever a player that wears out his welcome more in professional sports than find me someone else besides Dwight Howard.

Once upon a time, Howard was selected as the No.1 overall pick in the 2004 NBA Draft by the Orlando Magic.

To Dwight's credit, he lasted in Central Florida for eight seasons and led the franchise to an NBA Finals Appearance. A falling out with Coach Stan Van Gundy ultimately led him to the Los Angeles Lakers.

More falling outs would continue as Howard and Lakers icon Kobe Bryant would last a single season which led to his next move to the Houston Rockets. He lasted three seasons in The Lone Star State then moved on.

The following stops would all be one year apiece. He played in his hometown of Atlanta, then moved up I-85 North to play in Charlotte and onto the Nations Capital to play for the Washington Wizards.

There were two non-playing stints for the Brooklyn Nets and The Memphis Grizzlies.

But we're talking about a guy that has now played for four teams over the past four seasons.

If you look at the career of Dwight Howard, he's averaged 17.4 points-per-game and 12.7 rebounds-per-game.

He's an eight-time NBA All-Star and three-time NBA Defensive Player of The Year.

He's 33 years old and now you can put him in the journeyman category. 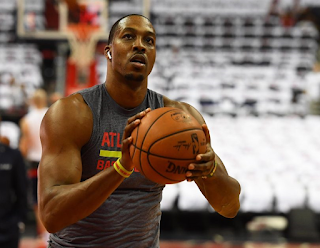 According to ESPN's Adrian Wojnarowski, Howard will receive a non-guaranteed contract to return the LA Lakers.

The Lakers recently found themselves with an unexpected hole at center when free-agent signing DeMarcus Cousins suffered a torn ACL in mid-August. After battling back from a ruptured Achilles Tendon, and torn Quadriceps, Cousins could miss the 2019-20 Season.

With Cousins out, JaVale McGee was set to enter the campaign as the sole traditional center on the Lakers roster.

I view this move for the Lakers as low-risk.

Howard is 6-11, 265 pounds and as long as he continues to stay in shape, there is some good basketball left in him.

With LeBron James and newly acquired Anthony Davis on the squad, these guys will make sure that he can't and won't become a distraction.

To think that Howard is getting a non-guaranteed contract must be a blow to his ego.

But lets face the facts, he's been with six different franchises and he's running out of places to go with his toxic and cancerous locker-room attitude.

I reiterate that Non-Guaranteed aren't words this man is used to hearing.

He won't get closer to winning an NBA Championship as the opportunities for employment around the NBA dwindle. Howard's reputation has now caught up with him.

One of my favorite lines pertains to Morris the famous cat and his food.

Morris ran out of lives with Nine Lives!

Dwight, you're just about to run out.

In Los Angeles you better make the most of this latest life!

He has six playing stops and two non-playing which brings us up to eight places. His return to the Lakers makes it nine.

For the Lakers, this move is an everything to gain, nothing to lose.

Scott Morganroth can be reached www.scottsports33.com and is the Founder and CEO of The South Florida Tribune.

He is the Co-Host of the Sports Exchange which airs on Tuesday's and Thursday's from 5-7 pm on the weinetwork.com. It can also be seen on Facebook Live with Peter Wein.
- August 25, 2019