The Competitor In Me

The closest sport I ever had a chance to pursue was baseball.

During my youth in Southfield, MI., I played six years of baseball, one in hockey and basketball apiece. 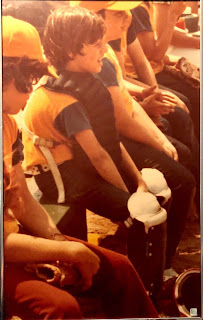 My father coached me in five of six years playing on the diamond.  I played catcher for three years and I enjoyed the position because it was for thinkers.

Through the years in the media some of my favorite interviews were with catchers because you can relate to those that played the same position.

If you put me in the outfield, I'd lose my focus and balls could get past me if I lost concentration. Those singles would turn into extra base hits. I could only hope that one of my fellow outfielders would back me up.

When I played third base, some of my throws were so wild you'd need a seven-foot player because my throws usually sailed therefore, the first baseman would be drawn off the bag. Then again, I was just a Little Leaguer and these wild throws are common at every level.

I always had the desire to play for Southfield Lathrup High School in Metro Detroit, but when my family uprooted us to Highland, MI, that became impossible because Lakeland High School wasn't within walking distance.

I had no other way to get to practice since there was no other family in the area to take me. Both of my parents worked full-time.

Nowadays, as I continue my journey to rebuild my passion in the Media Full-Time, I enjoy the challenge of building a Multi-Media venture from scratch. 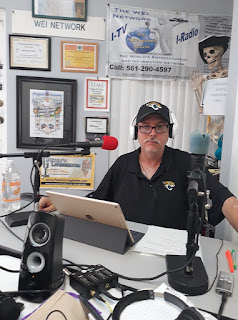 At the weinetwork.com, Peter Wein has been a joy to work with as a co-host.

He gives me my space and I produce The Sports Exchange which airs on Tuesday's and Thursday's from 5-7 pm.

We have great chemistry on the air and we're accumulating a good foundation of guests.

My guests are the backbone to the radio side. I enjoy interacting with them especially those that I followed as a child.

I have many good ones, but former MLB Pitcher Mark Littell is awesome!

Our audience on a nightly basis exceeds 3,000 per show when you factor the network and Facebook Live. Between the first showing, the replay the following day and archives, we're between 10-12,000. Our one year anniversary is coming up in October.

Thus, it's back in circulation, but in a big way.

But My real baby is the South Florida Tribune.

When I purchased the domain name two years ago, I was looking to build a media company where there would be a few writers and build a press release business.

South Florida is the area that I live in so this was a no brainer.

Back in the 1980's, I had a nice run with the Tampa Tribune when I went to college at the University of South Florida. I have a lot of great friends that I'm in touch with today.

Unfortunately that while the Tampa Tribune went out of business, I was lucky enough to land the domain name then turned it into an LLC through Sunbiz.

So here we are, The spirit of The Tampa Tampa Tribune is very much alive with my Online Publication.

Now my goal is to develop writers and allow business owners promote their business. This is an outlet that provides freedom of speech as long as it's not abused. I don't limit the Tribune to sports. It's wide-open for the most part, but I won't allow politics or religion. These two subjects are discretionary.

We have a good young baseball/music writer named Louis Addeo-Weiss, who is developing nicely. Hopefully he continues to progress and he's been told there will be more opportunities down the line.

My wife Candy does a super job behind the scenes helping me put all of this together.

This gives me an opportunity to find Media Distribution Partners to provide content to promote their organizations.

I have quite a few now, but most notably, The Jacksonville Jaguars, Florida Atlantic University Owls, University of South Florida, Lynn University are some of the ones. If you want to see the rest, go to www.southfloridatribune.com and then use the drop down Sporting News.

As I continue this journey, the excitement of this challenge is to find more Media Distribution Partners. Stay tuned for more updates as time progresses.

I want all of my followers to read Real News and be updated regularly.

Another resource is Reuters who supplies our National News and Sports.

There are plans down the road to add a You Tube Channel and South Florida Tribune Podcast. 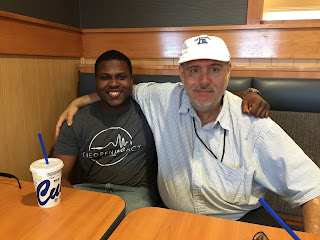 But only when I feel the traffic reaches much higher levels.

I'm too old school to deal with Fake News and won't tolerate such garbage.

But the key to any business is to reach as many people as possible.

As I continue to build this, My goal is to maximize the exposure of the weinetwork.com and other partners that join our team.

One of the things I like about the Sports Exchange is I've been able to find young charismatic talent who have desires to use us as a stepping stone to further their careers. 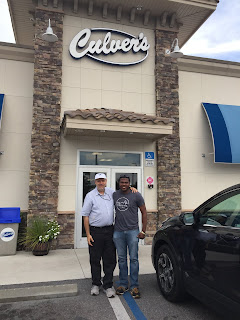 Last August, I met a young guy named Xavier McKnight. He was the Sports Information Director for Savannah State University. The Miami Hurricanes won this game 77-0. But I got to know Xavier McKnight real well and he would be one of our first core pieces with The Sports Exchange.

These photos were taken with McKnight at his new favorite restaurant in Bradenton, FL.

Xavier is one of those guys that can work in any sport and is so prepared that he's so credible on the air. At 23-years old, McKnight is a name that you'll hear plenty about as time progresses.

Another favorite is 23-year old Anthony Wood. I found him on LinkedIn early this year.

On the radio show, we call him UK. No, this doesn't stand for any university with these letters. But it's a short version for United Kingdom.

What impressed me about Wood is he's so knowledgeable about the NFL.

Once upon a time there was NFL Europe. The league has a tremendous following in the UK and much of this is attributed to the Jacksonville Jaguars playing there annually, in addition to the growing amount of games each season. 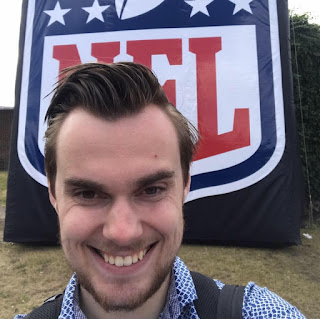 Guys like Wood are a product of such growth. He podcasts regularly and when things were slow during the summer, he had updates on Formula One Racing, Wimbledon, Sports Movies, etc...

But his tenacity in doing research excites me because those are the qualities that it takes to become good at any occupation, let alone being in the news business.

In my eyes, Wood will always be known for producing an outline then sending it to me so I can follow it on the show.

Now I require the outline from a lot of my young insiders. Wood is another guy where the sky is the limit.

When I look at McKnight and Wood, I see a lot of what I was like when I was young. I was hungry, determined and I would work 24 hours to get what I needed to get the job done. That's how we're wired mentally.

That's the Competitor in Me.

I may not have had the ability on the athletic field.

But off the field, I'm just excited as to where this journey ultimately leads me.

When you have these young studs around, it's impossible to not learn from these guys. They bring out The Fountain Of Youth!

Back in the day when there was terrestrial radio and network television, only the fortunate could get involved. It was a privilege to be in the industry.

Now with tons of channels to watch on television, internet-satellite radio taking over, this is a different overwhelming animal more tenacious that a grizzly bear. It will eat you up alive if you're not on top of things, therefore you have to make every second count.

I'm learning how to promote in Social Media like I've never done before and this digital experience with internet radio, podcasts is one of those situations where all of you just have to is relationships with honest intentions.

Years ago, the Associated Press, United Press International (UPI) and the Sports Ticker was your best friend. Not anymore.

But the key is to make it a win-win situation.

Take care of  your Media Distribution Partners by making as many appearances as possible because they're the ones who treat you with the respect to keep things going. Whatever people decide to write for you to gain exposure is just icing on the cake.

The industrious individuals realize that the more your name is out there the more opportunities you have in expanding your business to create the endless possibilities available to you which could lead to financial gain.

Word Of Mouth is everything!

This is an era where Google Rules!

It doesn't take much to find individuals these days by browsing.

Exposure is the key!

The financial part will eventually work itself out.

As I conclude this story, I'll say that regardless of how much talent you have, there is nothing more greater in life then having a tenacious work ethic.

I learned this at a young age and will take it with me until the day I die.

You don't last in the Media 40 years by accident.

At 56-years old, I still have the fire and 26 operations in addition to a myriad of other health issues, this won't slow me down.

That's what brings out The Competitor In Me.

Scott Morganroth can be reached at www.scottsports33.com. He is the Founder and CEO of The South Florida Tribune.
- August 24, 2019