I've seen a lot of football in the Sunshine State.

Pro football even includes the USFL back in the 1980's when I wrote on the Tampa Bay Bandits and covered a USFL Championship in 1984 at the old Tampa Stadium.

I've covered four Super Bowls in Florida, two in Miami and one apiece in Jacksonville and Tampa.

Now I've covered each Florida team during the third pre-season game on National TV on a Thursday night in a span of five seasons. 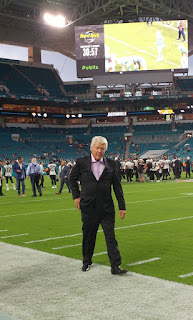 The first one occurred on a rainy night on August 28, 2015 when the Detroit Lions played in North Florida and defeated the Jaguars 22-17.

The next game occurred at Raymond James Stadium as the Detroit Lions defeated the Tampa Bay Buccaneers on Thursday August 23, 2018.

This game was delayed by heavy rain and lightening. When it was all said and done, the Detroit Lions emerged as 33-30 winners and a University of Florida Gators product named Brandon Powell, a wide receiver, was an undrafted free agent made the team as a result of incredible play on special teams.

Tonight, at a venue for which I've seen many football games, most notably Detroit Lions/Miami Dolphins contest and Dolphins vs Jaguars clashes, in addition to two Super Bowls, Mother Nature appears to be cooperating with us.

For Candy Ebling, who has had to brave these rainstorms, I prayed that she got a dry evening to work.

Meanwhile, this game was televised on FOX as Joe Buck and Troy Aikman were on the call featuring a game with two AFC teams normally not on their network.

Howie Long and Terry Bradshaw also made the trip from Los Angeles, CA. Erin Andrews reported on the sidelines while Michael Strahan made the trek from New York to South Florida.

Former Dolphins Coach Jimmy Johnson in the photo above on the sidelines, got to sleep in his own bed as he lives south in Key Largo, FL.

Jags Owner Shad Khan, below, made the trip down I-95 to see this pivotal pre-season game which he hopes will provide enough answers that will hopefully lead to a playoff season. 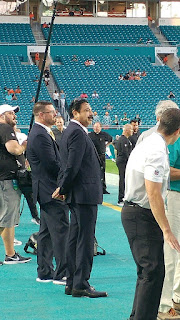 One thing is clear for Jacksonville is there will be no more QB Blake Bortles speculation as to how long he'll stay with the club or is he the trigger man of the future.

The last time these two teams met was on December 23, 2018 as Jacksonville, led by Bortles defeated Miami 17-7.

The win gave Jacksonville a 5-4 lead in their overall series history.
During the off-season, Bortles signed with the Los Angeles Rams.

The QB for Jacksonville is a guy that owns a Super Bowl Ring, Nick Foles (#7 pictured below looking for a receiver to throw to).

As for Miami, which is in the midst of a rebuilding season.

What should be decided here?

Will the Dolphins signal caller be veteran Ryan Fitzpatrick or second year-man Josh Rosen, acquired in an off-season trade with the Arizona Cardinals?

It will be interesting to see how this plays out during the first year of the Brian Flores era.

But if you're going to go to or

cover a pre-season game, then the best one is the third one as a good portion of these decisions are expected to be made, plus there are many scouts in the Press Box.

As for the players that stood out in this game, Foles was 6-10, 48 yards with one TD and one INT. His touchdown pass was for 10 yards to DeDe Westbrook that gave Jacksonville a 7-0 lead in the first quarter.

As for the rest of Jacksonville's regulars, RB Leonard Fournette had seven carries for 27 yards including a 12-yard run. As a receiver, he was targeted three times and had two catches for 19 yards.

Westbrook finished with four receptions for 29 yards and a touchdown.

One guy trying to make the roster is WR Terrelle Pryor. He had three catches for 26 yards with an 8.6 average.

Fitzpatrick's night was done with 4:56 left in the third quarter and Rosen took over.

Fitzpatrick is in the photo handing the ball off to his running back.

The contest ended with a Miami Dolphins 22-7 win.

This was anything but a nail biter but then again, are there many of those in August?

Candy did stay dry as Mother Nature stayed away.

The tickets distributed 49,317 for their home dress rehearsal.

Meanwhile the Miami Dolphins (2-1) also conclude the pre-season on the road Thursday Night against New Orleans.

Scott Morganroth can be reached at scottbm33@gmail.com and is the CEO and Founder of The South Florida Tribune.