During the course of the baseball season, former Sports Exchange Contributor Rick Curti has been making a strong case on our show, and in Social Media, as to why his home area Charlotte, NC., deserves a Major League Baseball franchise.

My Co-Host Peter Wein and I have enjoyed giving Curti the platform to make his case.

Curti has been an excellent contributor to the show, plus has done a nice job writing stories for the South Florida Tribune.

Curti has been on this crusade for a long time.

He’s generated attention in the Carolinas by creating A Facebook Page, talking to local officials to promoting the Charlotte Bats. He's also been interviewed by the local media.

We finally met in person in June in Charlotte, NC as I was on my way to the National Sports Media Association Convention in Winston Salem, NC.

I have admired Curti’s efforts to try to pull this off.

He’s made himself visible working for an Arena Football League lower level team called the Carolina Energy working in the PR Department.

His energy has been contagious as his enthusiasm is felt amongst those he’s around. You can never have enough visibility.

It’s no secret that the Tampa Bay Rays should be in the news for their impressive 75-54 record. If the playoffs started tomorrow, the franchise which is based out of St. Petersburg, FL., would reach them via the Wildcard. 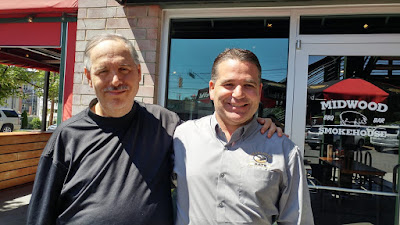 This organization continues to remain competitive because of their emphasis on player development and keeping salaries down to a minimal.

They supplement the roster with affordable veteran castoffs from other teams. They have an outstanding young skipper in Kevin Cash, who has to pilot one of the lowest payrolls in baseball.

Yet, what impresses me the most, the Rays play in the toughest division in baseball with the New York Yankees and Boston Red Sox thus have. Even the Toronto Blue Jays and Baltimore Orioles have the ability to spend lots of money on players.

Cash’s predecessor Joe Maddon won a World Championship with The Chicago Cubs with great young talent and had the resources to pay for star players a few years ago.

Yet, there is a chance by the end of this season, the question remains, will Maddon be retained as skipper at the end of the season if the Cubs fail to go deep into the postseason?

We’ll find out in a few short months.

But back to the Rays.

Here is a team which is trapped into a bad lease at Tropicana Field which runs through the 2027 season. No progress has been made on getting a new stadium in either Pinellas or Hillsborough Counties.

Ownership has even discussed the possibility about playing some games in the future in Montreal. Time will tell if this is even legally possible.

The Rays have reduced the capacity to 25,000 to avoid embarrassment of empty seats, thus Tropicana Field is the smallest MLB Ballpark.

The team is being ridiculed in the National Media and the Tampa Bay Area has become a laughing stock that it can't support MLB.

When a club can't sell out in the post-season, there are problems.

But as we look ahead, what cities would be logical candidates to get a team either through expansion or relocation?

Sorry to burst your bubble Rick, but Charlotte wouldn't make my list!

Your best bet to watch MLB Baseball is to drive down I-85-South and travel four hours to see the Atlanta Braves.

As you know Mr. Curti, the AAA Charlotte Knights, a Chicago White Sox affiliate, have a beautiful stadium downtown and it's a hot ticket. Is the stadium expandable to house an MLB team or will another venue have to be built?

Speaking of the Rays, Durham, NC., is their AAA affiliate and there is an excellent baseball history in the area.

Montreal is at top of my list because this is one of Canada's largest cities and before the 1994 Baseball Strike doomed the area, the Expos were a sound franchise. As long as there is a new ballpark, I see the Expos rebirth.

Moreover, if the Rays move there, they'll be in the American League East which would be huge.

With the Yankees and Red Sox and rival Blue Jays, we have an NHL Division on the diamond. Need I say much about those cities rivals on frozen pond.

Las Vegas seems to be slowly shaking it's gambling reputation and is turning into a sports town.

The NHL's Vegas Golden Knights are entering their third season and have a great following.

The Oakland Raiders are arriving in 2020.

The Oakland A's have a AAA team in Las Vegas.

I see the market always being used as leverage if a team can't get a stadium build. It might be far fetched, but if the Oakland A's don't get a new stadium built, they could follow the Raiders. But don't hold your breath.

It appears that the City Of Oakland is working on a deal to get the A's a new stadium built and MLB wouldn't be excited to lose a Bay Area Market, though Las Vegas area is one of the fastest growing cites in the USA.

I could see Portland, OR., as a possibility because this would be a great rivalry for the Seattle Mariners. It's a small market, but because of the rain the area gets, a domed stadium or retractable roof would be necessary.

Finally, Nashville, TN., is a consideration.

The state has an NBA team in Memphis.

Nashville has the NHL's Predators and the NFL's Titans.

The only question is if their AAA Stadium could be expandable to accommodate an MLB team.

The area has a great history with the Nashville Sounds.

Despite a small media market, the Nashville area is growing in leaps and bounds.

The one constant throughout this story in the growth in potential markets.

Do these have sufficient stadiums to land a team? I doubt any city would spend any more money to build another stadium.

In the end Rick, lobby all you want for Charlotte and get all the publicity you can handle for your efforts. But in the end, the Carolinas aren't getting MLB!

You still have the NHL's Hurricanes in Raleigh, a sport you don't follow.

There is always NASCAR which is another sport you don't care about.

And of course, you have the NFL's Carolina Panthers and NBA's Hornets who are tight-fisted under NBA Hall Of Famer Michael Jordan.

But keep trying Rick. In life there is nothing wrong with dreaming.

I've been wrong before and if they get an MLB team, I would welcome the opportunity to do play-by-play broadcasting for your Charlotte Bats.

Scott Morganroth can be reached at www.scottsports33.com and is the CEO and Founder of The South Florida Tribune.
- August 23, 2019