If there was ever a game that would be more lopsided than the other, I would  have guessed it would have been the FAU Owls traveling to Ohio Stadium and facing the Ohio State Buckeyes, rather than the Wisconsin Badgers visiting the USF Bulls in Tampa.

Boy, was I wrong! 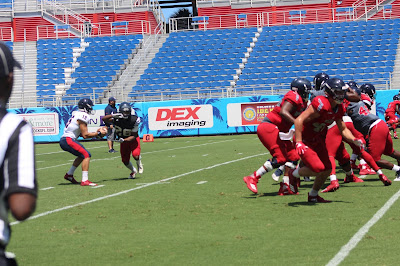 Wisconsin Heisman Trophy Candidate Junior Running Back Jonathan Taylor put on a clinic as he scored four touchdowns as the No.19 Badgers pounded my Alma-Mater the South Florida Bulls 49-0 in a game that was delayed by lightening.

Two of Taylor's touchdowns were on the ground for 37 and 38-yards, respectively.

Wisconsin (1-0) led USF 28-0 at the half. Taylor also had two catches for 48 yards. Both receptions resulted in two touchdowns and were the first of his career in the air.

Last season, he had eight catches for 60 yards proving that he is a dual threat.

Taylor ran for 135 yards as he picked up where he left off a year ago when he amassed 2,194 yards and 16 touchdowns, for a squad whose mascot is Bucky The Badger.

USF lost its seventh straight game and did so by committing three turnovers.

The Bulls (0-1) lost six straight to finish the 2018 season at 7-6 much to the displeasure of Coach Charlie Strong.

From a statistical standpoint, all you need to know is Wisconsin outgained USF in total yards 433-157.

The attendance at Raymond James Stadium was 46,704.

After trailing 28-0 seven minutes into the contest, and being mauled early by the heavy 28-point favored Buckeyes (1-0) , FAU competed and trailed 28-3 at the end of the first half.

But Owls QB Chris Robison let 103,228 Buckeye fans know that this opponent would not be just an early season pushover.

Robison had a solid performance by completing 22-34, for 178 yards and one touchdown and zero interceptions. 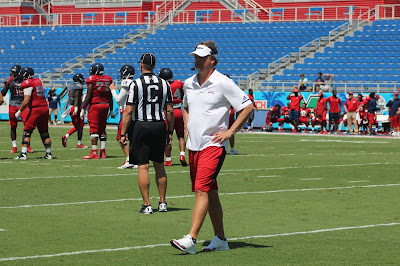 In the end, FAU held its own against an opponent that has National Championship aspirations.

The Owls can build on this performance as they open their home regular season versus the Central Florida Knights on Saturday, August 28 at 7 pm at FAU Stadium.

I'm not a big believer in moral victories.

But when you go to Columbus, Ohio, and play in an intimidating venue which is considered the Horse Shoe, and compete against an elite program in OSU, let alone collect a huge payday, it was a good weekend for FAU.

At the beginning of the game, I thought that with the big lead OSU took, the Buckeyes would easily score above 70 points.

They showed a FOX National TV audience that the university located in Boca Raton, FL., has an upstart program coached by Lane Kiffin, who is in the photo in the Spring Game.

As for USF, Strong has a lot of work to do after an embarrassing performance on Friday Night.

It will be interesting as a tale of two programs which I'm deeply connected fare not only this season, but will face one another in 2020.

This tale of two games were against two of the best Big 10 opponents in Wisconsin and Ohio State. Both figure to be big contenders to possibly play in the Big 10 Championship Game in December.

Scott Morganroth can be reached at www.scottsports33.com and is the Founder and CEO for The South Florida Tribune.
- August 31, 2019