In life, there are times when you ask where was I when specific events happen?

I've had numerous moments like that through the years.

Especially when I've had medical issues connecting them with events and dates.

On this day in 2007, one of those occurred at Lockhart Stadium in Fort Lauderdale, FL.

During the weeks leading up to the Michigan Wolverines hosting Appalachian State at The Big House in Ann Arbor, MI., a friend of mine named Mark Lehrman asked me what I thought of this matchup.

The Mountaineers entered the contest as two-time FCS Champions while the Wolverines came into the game as No.5 in the AP and Coaches Poll.

I told Mark this game is going to be tougher than most people think.

Just because you're at a lower level of college football doesn't mean that you're much better than your opponent.

There are a lot of great NFL players that come from these institutions such as the late Walter Payton and Jerry Rice.

The Michigan vs Appalachian State University (ASU) game was the first ever on the New Big 10 Network.

Little did anyone know that this would be the Biggest Upset in College Football History.

There was no betting line on this game. Las Vegas didn't think much of it to give it a line.

Oh, how Vegas missed this one.

ASU was ranked No.1 in the pre-season FCS Poll from The Sports Network, receiving 67 out of 70 first place votes. The team had won the previous two FCS National Championships and were favorites to win a third consecutive title according to media outlets.

More importantly, they had also won their last 14 games, the longest in either Division I Subdivision at that time. They had an overall record of 6-34-1 against major FBS teams. The Mountaineers ran a no-huddle spread option system, which they implemented in 2005, their first championship season.

The Wolverines would finish the season 9-4 and ended their season beating the Florida Gators 41-35 in the Capital One Bowl in Orlando.

Where was I when all of this history took place on September 1, 2007? 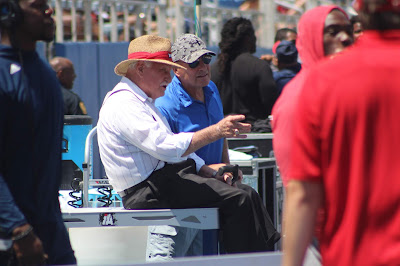 I was covering My first FAU Football Game for the Deerfield Beach Observer at Lockhart Stadium for a team that was coached by Howard Schnellenberger, who is in the photo at this year's Spring Game.

FAU faced Middle Tennessee State, who was and is currently coached by Rick Stockstill, now in his 14th season.

The aftermath of the Big Upset at The Big House saw ASU win their third consecutive FCS Championship.

The Mountaineers became the first FCS team to receive votes in the Final AP Poll. They received five votes which placed them at a tie for 34th overall with The University of South Florida.

Michigan hosted the Mountaineers again in 2014 and the visitor received $850,000 to get mauled 52-14. The Mountaineers were now members of FBS and played in the Sun Belt Conference.

Twelve years nearly to the day, Stockstill would face The No.7 Michigan Wolverines on August 31, 2019 on The Big 10 Network.

Middle Tennessee State entered the game as 35.5 point underdogs and they compete in Conference USA.

The Blue Raiders capitalized on two U-M turnovers and scored late in garbage time, but lost 40-21 in front of 110,811. The margin of victory didn't reach the point spread. But there would be no major upsets this time.

While I have no idea of the amount Middle Tennessee State earned for this game, I assume they earned between $750,000 -- $ 1 Million.


But the prime-time exposure was priceless.

As I look back at the sequence of events, it's surreal to think that Middle Tennessee State, located on the outskirts of Nashville in Murfreesboro, would face the two teams I cover 12 years apart nearly to the day with a historical upset.

Nevertheless, it was a good opportunity to reminisce where I was when a particular game occurred.

Yet, it's amazing how things indeed come full circle.

Scott Morganroth can be reached at www.scottsports33.com and is the Founder and CEO of The South Florida Tribune.
- September 01, 2019